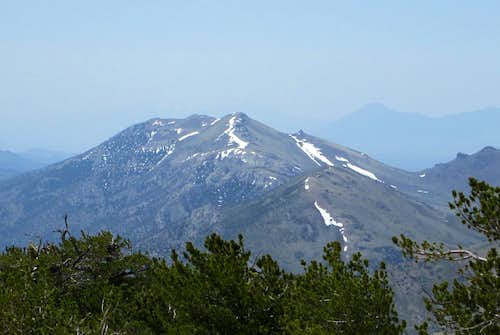 Located north of Ely is the Schell Creek range and it is one of the really nice mountain ranges found in the state of Nevada. Other peaks of interest in the range are North and South Schell peaks and many others that see frequent visitors. However, North Lovell peak is the one that is lacking fame and visitation so those of you who have never heard of this mountain, this summitpost page should help to put a spotlight on this one.

With almost 2000 feet of prominence, North Lovell is the 173rd most prominent peak in Nevada and is of interest to those peakbaggers who are chasing after the most prominent Nevada peaks. What makes North Lovell particularly interesting to me is the history of the area. The pony express ran through Schellbourne Pass and later the Lincoln highway was nearby. Read the information plaques that the Nevada Department of transportation has set up at the Schellbourne rest area,  which is very close to North Lovell Peak and worth a stop.  Click each of the following images to their highest resolution to be able to read the information.

From Ely, Wendover or Wells, head to the Schellboune rest area that is located on US 93. At the south end of the rest area is a good graded road that heads east. Take the good graded road toward Schellbourne Pass and after about 4 miles, look for a dirt road that heads north. This is the McMaughn Canyon road (not signed) and drive as far as you can on it, avoiding several roads that branch off to the right. Pass the old McIntosh cabin (remains on right side) of the road and you'll find this road has some rough spots, crosses a creek in a couple places and has brush that your paint job will need to avoid. We came to a screeching halt when the road we were on deteriorated into a steep jeep track that had a deep rut on the right side and a stopper rock shelf further up the road. It wasn't worth the punishment to my Tacoma to try and make it up this stretch of road and if you go this route up McMaughn canyon, you'll know this spot when you get to it. Park and walk the jeep track, its about 450' of elevation gain but since the rest of the hike to the summit of North Lovell is relatively straightforward and easy, don't begrudge parking and walking from this point.

McMaughn Canyon route:
"It was a nice hike up to the little pass and then directly toward The Nipple using horse trails through the sage brush. Coming down we used the bottom of the drainage and that worked well also. Dennis did scramble up The Nipple on the ascent just because it looked like fun. It is a Class 3 scramble of 30-40 ft on the east side to the top. The hike up to North Lovell is not as dramatic. It is just a standard walk up to the summit marked with a benchmark. Nice views, easy hike."  (Dennis Poulin)

From where we parked, elevation gain was over 1600' and about 3 miles round trip, including a visit to the Nipple.

Spring Gulch route:
John Vitz said he drove up Spring Gulch (accessed from the east side), then up the south fork past Chicken Knoll
and Cooley's cabin to the saddle.  He hiked to the summit from there.  Greg Jagielski also took the north route.

Spring to late fall. In low snow years it may be possible to climb this during any month of the year.

You could find a few places to car camp in McMaughn canyon since this is BLM land and camping utilizing a leave no trace approach is allowed. No organized campgrounds are to be found in the immediate area and motels are available in Ely, Wells and Wendover. 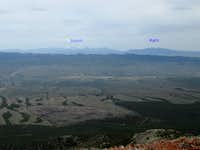 We found a central benchmark and two witness markers and an old wooden surveyors tripod that was still in good shape. The views were really nice and although we had poor weather conditions at the time of our visit, we were able to see the neighboring mountains nicely.

A small rock structure that can be visited on the way to the summit of North Lovell peak. If you like a scramble, this one is for you.