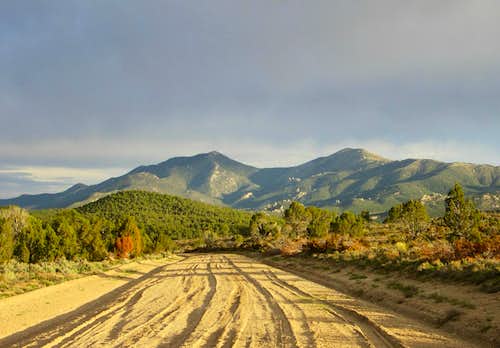 Looking at our goal from Tippett Canyon pass - on the left


Interestingly enough, this mountain range was named for Kern County California, which was created and named on April 2, 1866 in honor of Edward M. Kern, John Fremont's topographer and artist. Tungsten was discovered in the range in 1910 and the mining district on the south side of the range was called Tungstonia due to this. (information thanks to Helen Carlsons reference, "Nevada Place Names").  Also, the historical Overland Trail used by the stage lines and Pony Express riders passed just to the north of the Kern range.

This mountain range near the Nevada-Utah border is rarely visited by climbers and is probably more popular on its south side with ATV'ers and mining enthusiasts. It can be approached from either the north or south side but the information provided here will mainly concern what we found on the north side via Mallory Canyon. Climbing wise, there is almost no information available and it was thanks to a note to me from John Vitz that he and Andy Martin accessed the mountain via Mallory Canyon that gave me a clue as to finding a route. Greg Jagielski approached the mountain from the south side on his visit so that is another route possibility but it will require the study of maps and google earth to sort out the road network on that side of the range.

This range is truly off the beaten track, the Kern Mountain range is right up there for loneliness with Moody Mountain for visitation. Moody is the least visited mountain I've been to in Nevada but the Kern range High point follows closely in my opinion for second place. It takes a lot of driving on dirt roads to reach Mallory canyon on the north side which was the way we accessed the mountain range highpoint. Careful attention to the weather is important as often some of the roads become impassable in wet weather.

With about 2400 feet of prominence, this mountain comes in at #115 on the most prominent peak list of Nevada. 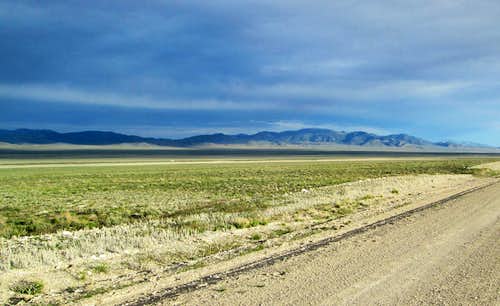 Long distance view from the north 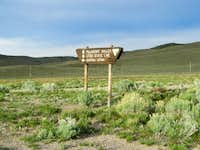 Probably the easiest way to get to Mallory Canyon is from Stateline on US 6/50 at the Utah-Nevada border. About a 0.7 of a mile east of Stateline (last gas and supplies), take a Utah Country road north. On the south side of the highway is a paved road that heads for Garretson and Milford, utah highway 159 which will help as a landmark. It may be signed as the Gandy road (aka Benchmark) but after turning north on this good graded road, avoid taking a turn to Eskdale a bit further up the road and drive 37 miles from US 6/50 to a turnoff for Pleasant Valley where you will turn left. This turn is at 39.5896 113.9168 (nad 27). Take this good graded road as it heads westerly for about 15 miles to the mouth of Mallory Canyon (39.7116 114.1088 6520'). You will hit the Nevada border after about ten miles after you turn off onto the Pleasant Valley road and then it is about another 5 miles to the Mallory Canyon road. You will pass several farms and ranches on your way up this road and overall the road is in great condition.

From US 93 Alt: A benchmark map book for Nevada is really helpful

From Wendover, head south to Whitehorse Pass and just over the pass look for a signed road that is called the Kinsley Mountain road. This road will tie into county road 33 (not signed) and becomes the Chin Creek road and then will become country road 32. Turn east on country road 35 at Tippett, the Cedar summit road that heads for Tippet canyon which will lead to Pleasant valley and to the Mallory Canyon road. Up until you reach the Mallory Canyon road, the roads leading to this point are generally in good shape. The road over Cedar Summit is not a place to be traveling in bad weather as the road can become impassable. Roughly, the distance from the turnoff from US 93 alt to Mallory Canyon is over 50 miles, all on dirt roads.

Another way to get to Mallory canyon from US 93 alt is to go over Schellbourne pass but you can see the route if you use the Benchmark map reference book mentioned above. It is also about 50 miles to get to the Mallory Canyon turnoff.

The road up Mallory Canyon isn't bad initially but high clearance will prove helpful. The road deteriorates somewhat but most vehicles with high clearance can make it to what is the trailhead at 7400 feet. Driving distance to the trailhead spot is not quite 3 miles and when you reach an obvious camp spot it will be further set apart by a cave just beyond a large fire ring. While you can drive about another 1/3rd of a mile further, the road beyond the cave is nasty and will require 4WD. It isn't worth it (I know, I drove further)and the road is washed out anyway about a half mile further. Trust me, park at the cave. Waypoint 39.6830 114.1347 Elev 7400. 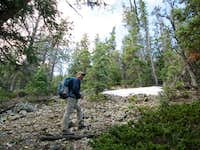 From the cave at 7400, follow the jeep track to where it fades at an old mining claim (elev about 8200') We proceeded to head for the saddle marked on the topo as 8940 and we stayed a bit east of 8940. Upon reaching the saddle we headed directly uphill towards the summit which we had waypointed (recommended). One of the nice aspects was the forest which we found on the way up to the saddle. It was very pleasant and shady. When we reached the saddle, we could see a road that came up the other side but we know our route works and don't have a clue about the condition of the roads on the other side. Greg Jagielski seemed to indicate that some of them were washed out and were more suitable for ATV's.

There was nothing difficult or technical about our route and from where I parked (beyond the cave), it was a 2000' elevation gain with a mile and a half of hiking. Dennis has posted his GPS track of our route on peakbagger.com From the cave trailhead, add several hundred more feet and about another half mile.
From the traihead to summit: 2200' 2 miles. 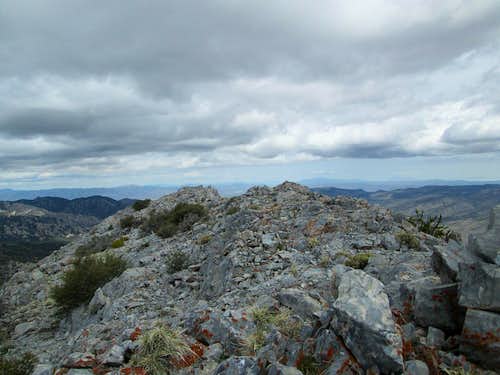 
We found no access issues, no gates to close and open so we found no red tape to deal with. This is BLM land.

This would be a mountain to avoid in bad weather due to the roads leading in and so spring to late autumn would probably be the best time to visit. Access would probably be best from the Utah side since you don't have to cross the Tippett Canyon pass from that direction.

A good camping spot exists at the trailhead (the cave). Room for two or three vehicles and a camping chair was found in the cave itself. Camping on BLM land is allowed as long as campers clean up after themselves and follow the "leave no trace" ethics. For those who don't want to camp, lodging can be found in StateLine and Baker near the Great Basin National Park. Great Basin National Park also has several campgrounds to utilize as well. 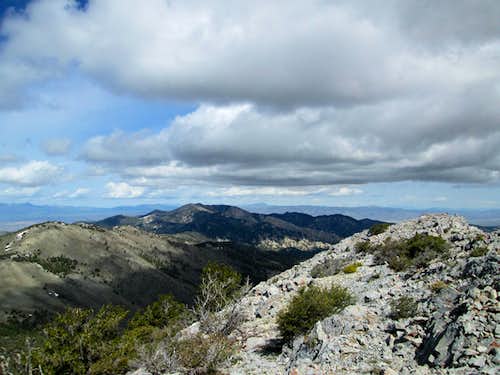 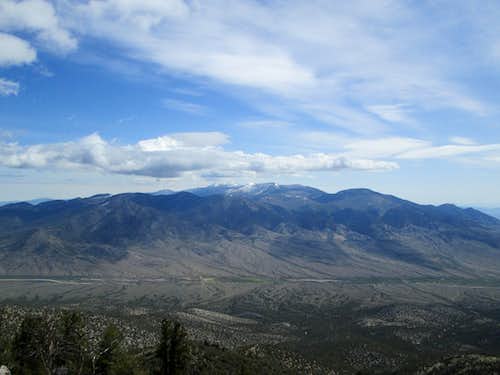 The Deep Creek range to the north 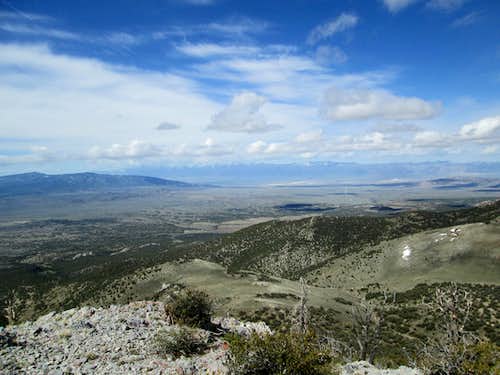 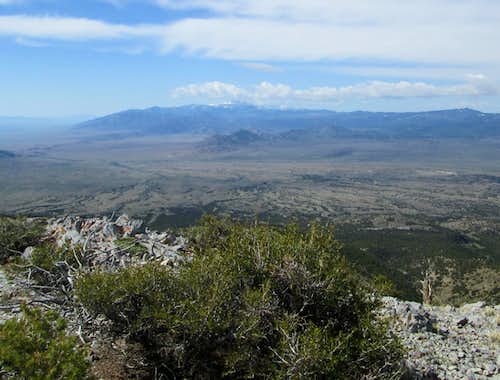 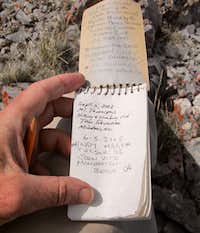 
When the register was originally placed by Gordon MacLeod and Barbara Lilley in 1997, they had one other person in their group. The next person to sign the register did so 5 years later and the next ones after that was 3 years later. When Greg signed the register in 2011, it had been 6 years between visits. Only Moody Mountain in central Nevada and Shingle Peak south of Ely are as rarely visited as this one.
1997- 3
2002- 1
2005- 2
2011- 1
2014- 2
Since our visit, Ken Jones also climbed this one in October of 2014 and more
recently in 2015 (June),  Bob Packard and Richard Carey visited this one.  Update info can be found at Peakbagger.com 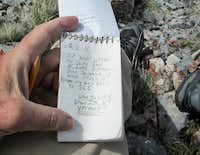