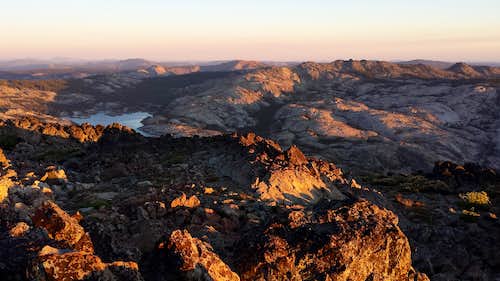 Sunset view from English Mtn
English Mtn is on the Sierra Peak Section list (https://www.summitpost.org/sierra-peaks-section-sps/404706) and the Tahoe Ogul list (http://climber.org/wsc/OGULlist.html). The Pacific Crest Trail crosses a rise 2.5 miles to the North-East, providing good views of the mountain.

There are no maintained trails up English, but the landscape is a mix of open piney woods, low brush and boulder fields – you can walk almost anywhere you want. Here are the most obvious approaches:

I've seen no trail reports, but from the map it looks like you could drive on past the French Creek crossing and up to the saddle before descending to Tollhouse Lake. From the saddle it would be appx 3.4 miles round-trip and 1,400 vertical feet.

The topo map shows a 4WD road ascending the North-West slope of English.The turn-off from Meadow Lake road is roughly halfway between the turn-off to Catfish Lake and Bowman Lake: 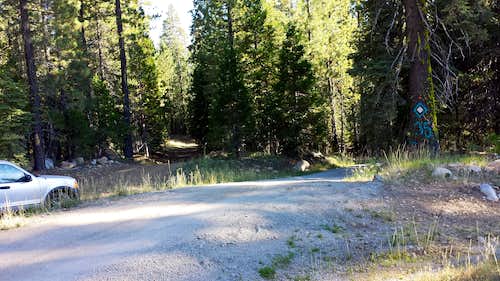 When I drove this in August 2014 the 4WD road was in great shape, better than Meadow Lake road – up until about 2.3 miles after the gate,where it splits. The left fork ascends steeply; we took the right fork and made it to 2.8 miles. However the last bit of driving wasn't worth it – there were some high berms that bottomed out my Explorer on the way up and left it completely stranded on the way down. Digging it out in the dark was not a fun way to end the hike. I recommend parking shortly after the fork, walking up the 4WD trail until it vanishes, then making your way to Lake 7574. From the lake, head North-East to the peak, a quick rocky scramble that at its worst is easy Class 3 with no exposure. From the fork it's roughly 2.6 miles round-trip with 1,300' elevation gain.

Bechtt was recently stopped on this road by a logging crew who told him it was private property, but let him pass anyway. I contacted the Forest Service at the Tahoe National Forest station and received the following response:

"This road belongs to the Forest Service (FS) and Sierra Pacific Industries (SPI).  When the road agreement was set in place, in the 60s, it did not account for public use of the road. Therefore the FS does not have the legal authority to allow such use, and as such is not displayed on the Motor Vehicle Use Map (MVUM).  You can find the MVUMs for the Tahoe National Forest here.  These maps show the roads that are available for public use and they display the season of use and the types of vehicles that can be used on each road.  So, in other words, if the road is not shown on the map it is prohibited from using a motor vehicle on it. The prohibition only pertains to motor vehicles.  It does not prohibit hiking, horseback, bicycles etc."

After snow melts in the spring until roads close in the winter. Winter approaches are possible but much longer – see http://www.climber.org/TripReports/1998/325.html

“About ten geographic features in California bear the name English,sometimes perhaps from the family name. Not only were English miners and settlers less numerous than either the Scots or the 'Dutch,' but their presence was less conspicuous.” (Gudde)

Lake Faucherie: “Named for B. Faucherie, a pioneering hydraulic engineer of the1850's and 1860's who also created French Lake and the Magenta flume”(Gudde)