Crow Peak from the toe of Jewel Glacier, November
Crow Peak is a significant summit in the Western Chugach Mountains that receives practically no attention, the victim of a mapping error that makes it appear to be a minor tableland along a ridge of higher, sharper peaks. The truth is that Crow has 2000 feet of prominence and is the highest summit in the wild and seldom explored "Bird Country," the nearly 100 square miles drained by Bird Creek and populated by a couple of dozen peaks named for birds or their body parts. It is also one of the most accessible of the Bird Country peaks, just a couple of miles from a well-maintained trail. It has commanding views of a vast domain.

The Mountain the Mappers Forgot to Finish Final scramble to Crow Peak's summit
When the USGS made the Anchorage A-6 quad in 1960, they quit drawing contours on Crow Peak with the 5600-foot line. This left Crow with the appearance of a big, flat-topped mesa, overshadowed by Magpie, Camp Robber, Grey Jay, and an assortment of unnamed neighbors. In fact, there should have been another three hundred-foot contours inside the 5600-foot loop. It is Crow, at a shade under 6000 feet, that overshadows the neighbors.

This kind of error was not uncommon in that era of mapmaking, when contour lines were hand-drawn. A few mountains just never got finished, so that a sharp pinnacle would wind up looking like a much lower mesa. In the case of Crow, it meant that a peak with 2000 feet of prominence wound up as a forgotten lump, usually omitted from lists of notable Chugach summits. The approach hike to Crow Peak comes up this wonderful valley. Barnes Mountain is on the left, Raggedtop on the right.
The starting point for Crow Peak is the Crow Pass Trailhead. From Anchorage, take the Seward Highway (Alaska Highway 1) southward about 30 miles to mile post 90. Make the well-marked turning left toward Girdwood. After two miles, turn left again on Crow Creek Road and follow it all the way to its end, about a 15-minute drive on well-graded dirt that is fine for all types of vehicles. The trailhead has ample free parking and an outhouse. The trailhead elevation is 1600 feet. The crow glacier route is sketched onto this image from the Anchorage A-6 quad. A label for Crow Peak has been added.
Crow Glacier Route (class 3):

Hike up the well-constructed Crow Pass (Iditarod) Trail from the parking lot. The trail switchbacks through dense brush for about a mile before emerging into an open canyon below Barnes Mountain. Continue up-valley on any branch of the trail that looks good to you (they all re-converge higher up), passing ruins of the old Monarch Gold Mine. After three miles from the trailhead on an excellent footway, you top out into the south end of Crow Pass, with Crystal Lake on your left. You've climbed to 3500 feet.

Leave the trail and skirt the north margin of the lake, continuing due west over tundra hillocks into the valley containing Crow Glacier. Hike and scramble to the head of this valley. You may want to stay off the glacier until it flattens out very high in the valley; although the ice in the center of the valley is not crevassed, there can be moats and holes to worry about. By staying to climber's right of the center as you ascend the valley, you'll be on (or over) moraine and bedrock. If you prefer the ice, bring Kahtoolas or crampons.

On Crow Glacier
At the head of the valley is the col between Crow and Magpie Peaks, a nice place to take in the view into the remote headwaters of Middle Fork Bird Creek. From the col, scramble the south ridge another thousand vertical feet to the summit, using bypasses on the east side as necessary. The scrambling is never very exposed, and this ridge barely qualifies for a class 3 rating, but it's slow going. The ridge is highly frost-shattered--pencil fracturing creates terrain that will sometimes make you feel as though you are climbing through a giant's game of pick-up-sticks. This loose material, coupled with a frustrating number of false summits, translates into a laborious ascent, and the final ridge climb takes 1-2 hours.

The complete 4350-foot ascent from the trailhead will take most people 4-7 hours.

From the nearly level upper portion of Crow Glacier, a class 3 route directly up the east face to the summit is possible, but the 1500 feet of scree and poor quality slabs is not pleasant.

The northeast ridge appears to have at least one major tower that could be difficult to negotiate.

There is a good northern route from the valley used to access Steamroller Pass. But this involves some time on Clear Glacier, which has large crevasses, sometimes hidden, and should be approached with a lot of caution. In 2019 I was able to make a safe route using its western and southern margins of the glacier, along with the crest of Crow's west ridge (loose class 3). Beware of the lobe of Clear Glacier that goes right to the top of Crow Peak, since this is crevassed; you are safer on the west ridge.

Traveling up or down the glacier at the head of Middle Fork Bird Creek, which heads on the west side of the Crow-Magpie col, would be a serious mountaineering challenge.

A traverse from Magpie appears to be fourth class, involving at least one steep permanent snowfield with a dangerous runout in the event of an uncontrolled slide.

The regular route to Crow Peak is entirely in Chugach National Forest, not Chugach State Park. There is no parking fee at the trailhead. There aren't any rules that will restrict reasonably responsible users. Don't mess with or deface the historic mining ruins. Crystal Lake, on the hike to Crow Peak
There are superb campsites on the first benches west of Crystal Lake in Crow Pass, as you ascend toward the toe of Crow Glacier. They have perennial water and, if chosen correctly, they are completely out of view of the trail and have an awesome wilderness feel.

If you plan far ahead, you can reserve the Forest Service's wonderful Crow Pass Cabin on Crystal Lake. Rental is $25 per night. Reservations are taken 180 days in advance of the day you want to be there. It's a cozy place to roll out your sleeping bag. Here's a picture of the cabin, with Crow Peak behind.

This is one mountain that nobody should climb without bringing a pair of gloves--not because it's cold (although it usually is), but because the pencil-fracturing has made some of the scree into knife blades and spear points. Long pants and reasonably protective footwear would also be a good idea. On one trip, even with gloves, I wound up with two punctures in my hands that took weeks to heal.

The Crow Creek canyon, traversed by the Crow Pass Trail as it approaches the pass, is prone to winter and early spring avalanches. This risk should recede by sometime in May. There are some bears (both grizzly and black) in the area, so that it is a good idea to make some noise and carry bear spray while hiking in the brush.

As for the Crow Glacier valley, avalanche risk there could persist well into June. Wildlife shouldn't be too much of a concern, but I have seen bear tracks on Crow Glacier ... they do venture up here.

The weather in this part of the Chugach is influenced by Prince William Sound. Clouds often hang low over the peaks, and rain and snowfall greatly exceed what you would encounter around the Anchorage bowl. It can be a challenge to pick a good weather window that will carry you all the way to the top. The Alyeska Resort webcams can give you an idea of the weather not too far from the trailhead, though weather around Crow Peak tends to be worse.

Even though it is the highest thing around, Crow Peak can be surprisingly difficult to pick out from a distance. The photo below identifies it when seen from Mt. Alyeska, its better-known neighbor to the southeast. 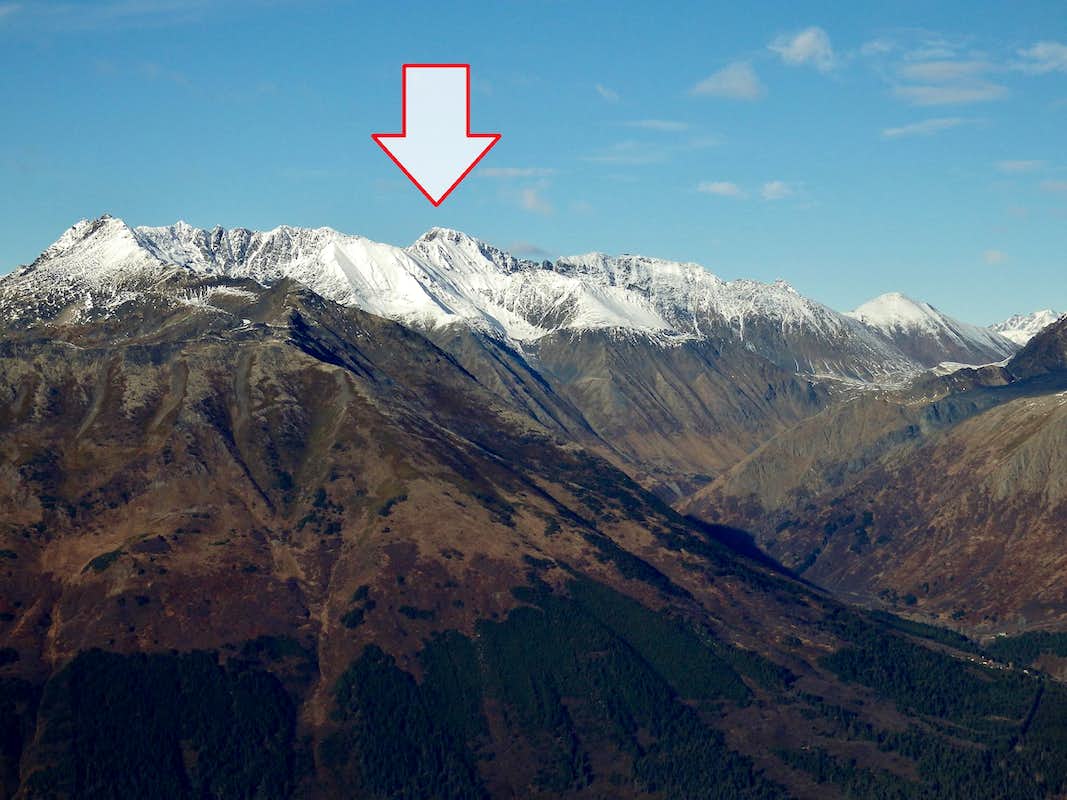