Snowbank Mountain is one of the 12,000 foot peaks in the Beartooth Mountains of Montana. It is perhaps the most remote one as well requiring at least 12 miles of hiking to get to. The peak is characterized by a rugged north side coupled with a very gentle south side and a massive summit plateau, similar to many other 12,000 foot peaks in the Beartooths. It sits about 7 miles southeast of Granite Peak and 3 miles due west of Castle Mountain. The peak has 864 feet of Prominence to Darlene Mountain.

Castle Mountain Group with Snowbank Mountain at the far left

Clay Butte Trailhead
From Red Lodge, head south on Highway 212 (Beartooth Highway) and drive over Beartooth Pass. As you descend, pass the Beartooth Lake turnoff where a nice campground is found and continue west for 1.5 more miles. Turn right on the well maintained Clay Butte Road with signs for the Clay Butte Lookout Tower. Continue up this nice gravel road for 1.5 miles to the trailhead (elevation 9,580 feet) on the left side of the road right before a hairpin switchback. This is the primary trailhead for the Beartooth High Lakes Trail. 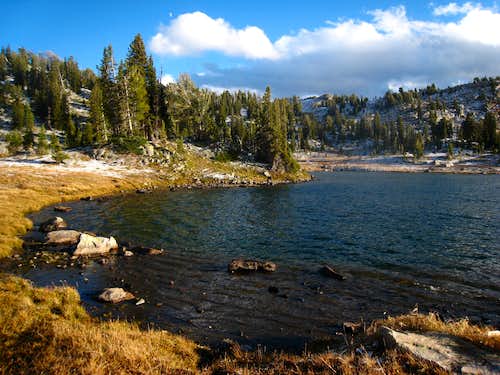 From the trailhead, start hiking the nice trail and reach a signed junction with the Granite Lake trail after 1.1 miles at 9,260 feet. Continue on the trail as it weaves up and down small hills and cross many tiny creeks along the west side of Beartooth Butte. After 1.9 miles from the Granite Lake junction, the stream descends a short ways to a larger creek at a little 3 foot waterfall. Continue across the stream here and follow a cutoff trail for 0.3 mile that meets the main Beartooth High Lakes trail at the southern end of Native Lake. This cutoff saves roughly 20 minutes and bypasses the signed trail junction at the northern end of Beartooth Butte.

From Native Lake, stay on the trail as it contours around Surprise Lake, then descends about 400 feet to a creek crossing and an unnamed lake at 9,320 feet, 2 miles from Native Lake. There is good camping here which is located only a few feet south of the Montana/Wyoming border. Do not follow an obvious trail heading steeply up the hill next to the meadow but instead hike around to the north side of this small lake and catch the main trail just out of view from the meadow. Contour around Thiel Lake and descend slightly to the creek draining Throop Lake at 9,400 feet.


Shortly after this crossing continue up steep switchbacks for 300 feet to a flat meadow at 9,750 feet where the slope eases. This part of the trail has substantial horse damage and is slick. Cross the Marmot Lake outlet stream (good camping and fishing) at 9,860 feet and cross over a small saddle just above Kidney Lake. Hike along the shore of Kidney Lake and make another 300 foot descent to Wright Lake. Great Camping can be found at Wright and Martin Lakes. Leave the trail here and walk north for 0.3 mile around the left (west) side of Martin Lake to its northwest corner. Continue up a small valley from here and climb to a small 10,040 saddle, with fantastic views of the Castle Group, 0.5 mile from the northwest corner of Martin Lake.

From this saddle, descend slightly passing a very small tarn and begin contouring right at 10,000 feet and up a prominent valley to the northeast towards Crystal Lake. Walk around the right (east) side of Crystal Lake on talus and grass to its north side at 9,900 feet with some of the best camping around, 0.8 miles from the small saddle. The approach is over (well...kind of). Continue north around the Pleiades Lakes and contour west around a small knob. Drop to the stream draining Flat Rock Lake but instead of heading directly to the lake, ascend 100 feet or so over a tiny saddle and contour around the southwest arm of the lake.


Locate the obvious valley coming in from the northwest draining Copepod and Cladocera Lakes. Ascend this gully along either side of the stream for 700 feet to Copepod Lake at 10,430 feet. There really isn't any trails from here on to the summit so be prepared for miles of talus hiking. Hike around the north sides of both Copepod and Cladocera Lakes and continue straight west up the talus to the small tarn at 10,850 feet. There is typically a huge cornice guarding the 10,955 foot saddle just past this small tarn. The best way around it is to hike up the shallower snow on the left (south) side of the cornice. Just below the saddle it's typically vertical snow but a Class 3 scramble route goes around the right side on the rock.

Once at the saddle, descend 120 feet to the lake below and hike easily around its north side below the waterfalls coming down from the north. Continue in a WNW direction and ascend the path of least resistance up the talus and slabs (Class 2+) up to another set of 2 small lakes at 11,090 feet which are likely not shown on most maps. Hike around the south side of these lakes on permanent snowfields. There are steep cliffs dropping in along the north shores making travel on that side difficult.

Once past the last lake, begin rounding to the right and head in a NNW direction directly to the unnamed tarn at 11,100 feet above Snowbank Lake. This tarn sits right at the base of Snowbank Mountain. Cross the outlet stream of this tarn and either ascend steeper talus along the southeast ridge of the mountain (Class 2+) or hike further west and ascend the permanent snowfield on the southeast slopes. The snow gets to about 35 degrees and may require an ice axe although our trekking poles worked well enough. It is 700 feet of gain from the tarn to the summit plateau which begins where the slope eases considerable at 11,800 feet. An additional half mile of hiking north on the gradual summit plateau takes you to the summit at the northern most point.

From the summit, views east to Darlene Mountain are stunning. Granite Mountain can be seen to the northwest and Mount Wood in the distance to the North. Pilot Peak in the Absaroka Mountains well to the south dominates the horizon to the south. Enjoy this summit as you are further from any road or established trail (effort-wise) than any other 12er in the Beartooths. 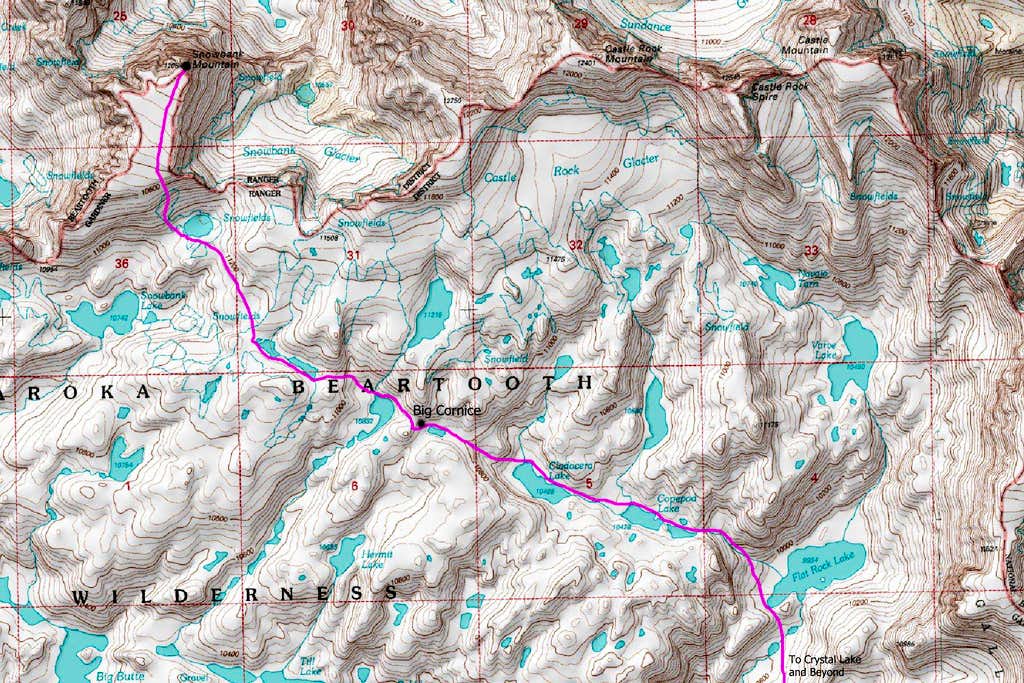 Summer climbing season is short in Montana with the best time to climb being late July through early September. However, expect some snow on the mountain any time of the year and expect any type of weather. Violent thunderstorms are a common daily occurrence and these storms can also drop snow in August so come prepared with rain gear and insulating clothing. Get an early start to avoid afternoon thunderstorms as they develop very fast and tend to come from the south or west.

There is great camping at the north end of Crystal Lake as well as many places along the Beartooth High Lakes trail. Wright Lake also has great camping. Camping is also available at all the trailheads. This area is within the Abasorka-Beartooth Wilderness therefore no motorized travel, including but not limited to, cars, motorcycles, bicycles, hang gliders, airplanes, scooters, etc... is allowed.

There is a ranger office right at the junction of US Highway 212 and the West Fork Road at the southern end of Red Lodge.