Stage Benchmark is a principal summit in the Tierra Blanca Mountains of the Anza-Borrego Desert State Park of Southern California. This range is essentially a series of foothills of the larger coastal ranges that separate San Diego and the beaches from the desert interior. Stage Benchmark is not the range highpoint, but it is one of its most prominent summits, with just over 1,000 feet of prominence. The benchmark is apparently named for the Great Southern Overland Stage Route of 1849, which presumably ran below the peak and is now covered over in asphalt and called the Imperial Highway.

Like most peaks in Anza-Borrego, the climbing is usually manageable for most hikers who don't mind some scrambling and route-finding, plus abundant cholla cactus. The first couple miles follows a canyon and across desert plains, while the last mile is up steep rock slopes. A well-chosen route would rate at most a class-2, with some loose rock and the heavy cactus being the main barriers.

This peak sees a few visitors every year, many from the various San Diego County hiking clubs. However, the climbing season is short, as temperatures here are often very hot (pushing 120F in summer). Even "cool" winter days can get warm, and the whitish rock radiates the heat effectively. Try to climb it during a cooler day, and if it's remotely warm, carry lots of water and keep an eye out for snakes. 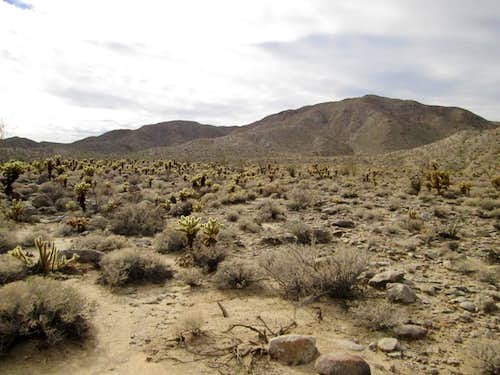 The main summit area as seen from near the highway.

The topographical maps show a track that supposedly heads into the canyon, but this track is no longer there. There is a pullout near (32.9365 N, 116.2641 W) marked by a small metal sign, roughly milepost 41. You can pull in here and back in out of sight from the highway, although your car should be safe in most cases anyway.

There is a tiny general store at the Agua Caliente County Park. Otherwise, top the gas in Julian or Ocotillo (or El Centro, since the gas station in Ocotillo is intermittently "in business"). 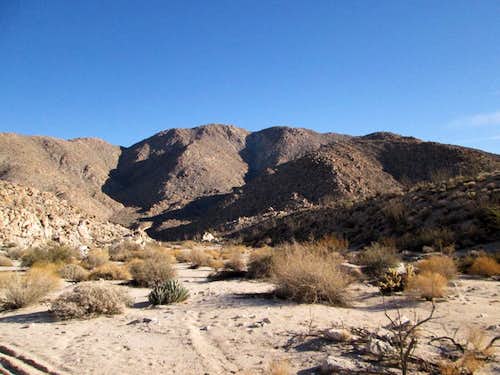 Stage Benchmark as seen from within the canyon.

Hike southwest across the gently-sloping desert plain, aiming for the obvious canyon, then drop into the canyon and follow it for about two miles until it opens up to the Inner Pasture, an elevated desert plain hemmed in by mountains on all sides. You gain about 600 feet to here, and the canyon is usually wide with almost no impediments.

Angle left and walk south, paralleling the base of the range until you are as due west of the summit as possible. At this point, start up the steep rocky slopes and stick to the ridges as much as possible. There is cholla cactus everywhere and some of the big rocks move, so step carefully.

Your route may differ from what I (and others did) but for the most part, aim for the highpoints and soon, you'll see the summit. The slopes lessen the higher up you go, and there is very little actual scrambling needed. I found myself angling through small passes and around rock outcrops. Keep an eye for landmarks and try to retrace your route as best as possible.

The summit area is kind of broad and spread out. You get good views of Whale Peak and of the ranges to the west. The round trip is about nine miles, and allow about 3 to 5 hours for the journey.

Winter is best, generally November through February. Summers are extremely hot, and the warmth can start early and linger into late Fall. 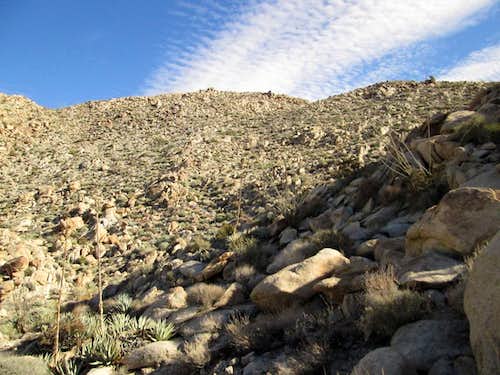 Summit is in view, about 400 feet higher

There are many camping options nearby. Bow Willow Campground is about nine miles of driving to the south, and charges about $15 per night. Camping is also available north at the Agua Caliente County Park. You are also allowed to camp virtually anywhere in Anza-Borrego as long as you follow basic rules (see link below). Note that there is a small "town" called Canebrake a little south of the trailhead. These are private lots so would not make a good place to camp.