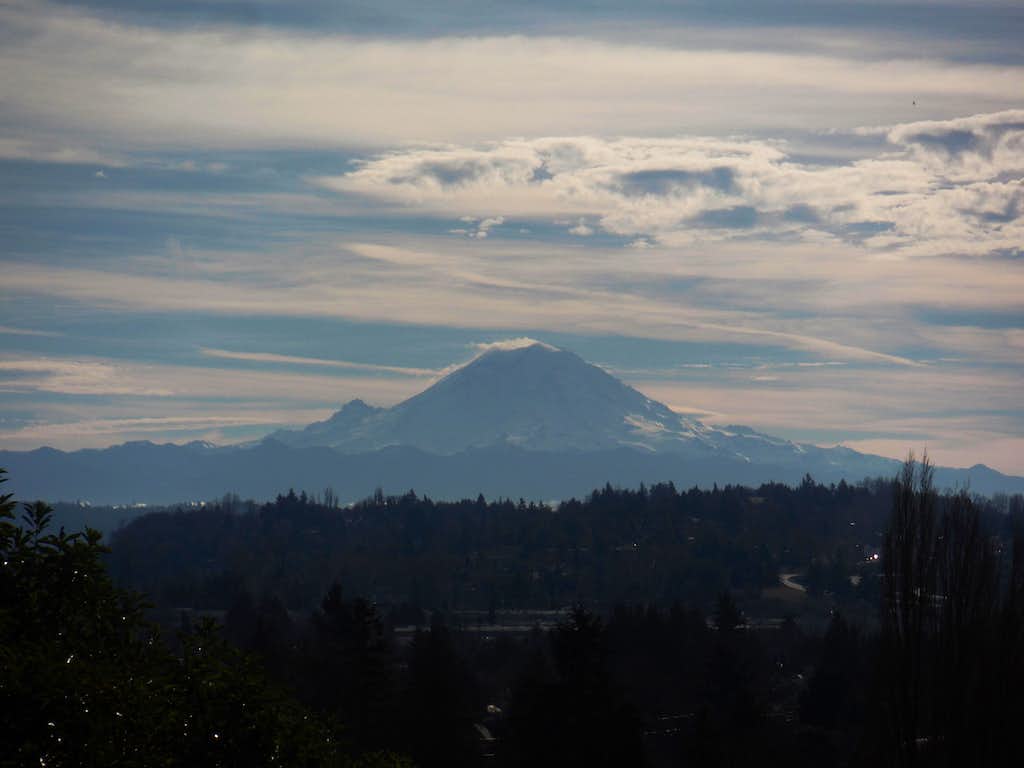 I thought about it very hard before putting up Duwamish Hill. First of all I know how low this "summit" really is. The fact that it is not even the highest point in the immediate area led me to have my reservation before I wrote this summit. But because of the rich history of this hill, the nice trail to summit of this hill and the decent views that this hill has, I thought is was only right to put this nice hill and scenic destination on Summitpost. At present the city of Tukwila has made this nice hill into a Reserve so I though it would only help the park by writing about this pretty peak. 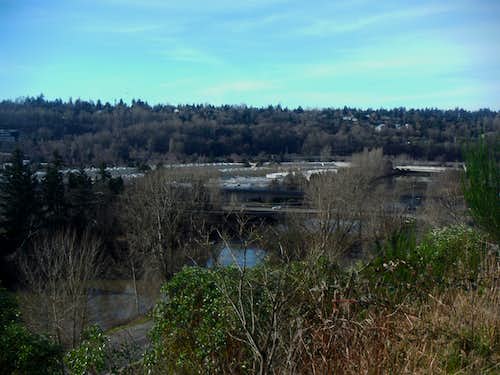 View of the Duwamish River

This hill is situated right in an industrial area, and it is a fascinating place in the sense that it is the city of Tukwila’s attempt at re-igniting interest in the cause of the Duwamish tribe in terms of its ongoing problems with lack of recognition. The appeal of Duwamish Hill is the very fact that it IS in an urban district. The trail is lined with several benches dedicated to the Duwamish and is part of the Restoration project. The views make this hill worth hiking up. The thing that is really amazing about this mountains is its impressive view of Mt. Rainier. It also has views of the beautiful Duwamish River below and of the entire Tukwila region and the Southern region on the South of Seattle. It is actually quiet stunning. I also love the fact that it has recently grown some yellow wildflowers, which you will see more of throughout this summer. The only drawback of hiking up this hill is that there is a shooting range closeby. 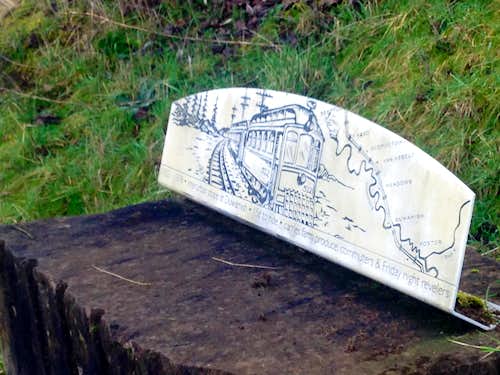 One of many benches on the way up

The total property of Duwamish Hill encompasses 8.6 acres, and some of the facilities of the entire preseve area include a park, viewpoints and an outdoor classroom area that can accommodate about 50 people. The history of Duwamish Hill and the significance of the history of quite notable and important, as well as its proximity to Seattle. . The city of Tukwila, which borders Seattle, has dedicated an entire natural area to the Salish tribe which is significant and important to not only the Salish tribe but Native Americans is general. Since it was officially opened to the public in 2010 after being acquired in 2004 in partnership with the Cascade Land Conservancy, many people do not know it is still there. The most notable thing from a cultural and Native American perspective is that this was considered by the Salish to be the “Epic of the Winds”. For the tribe, it meant that it was a gathering place from which the Salish could watch for groups coming into the area and confer and meet with other tribal members along the Duwamish River Valley. The Salish have an oral tradition that is actually ROOTED in the “Epic of the Winds”. Therefore, the partnership of honoring the Native American tradition is quite significant, and was actually funded, in part by the Muckleshoot Community Charity Fund. It was also funded by individual donors, the City of Tukwila and the Foster High School Drama Club, among many others. 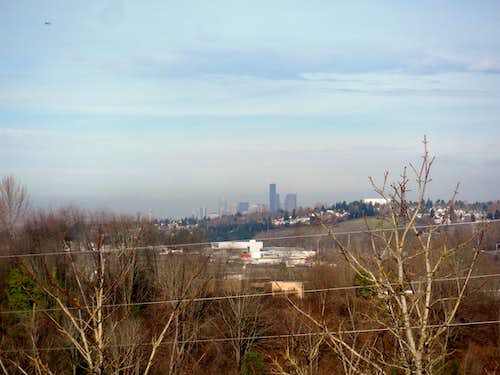 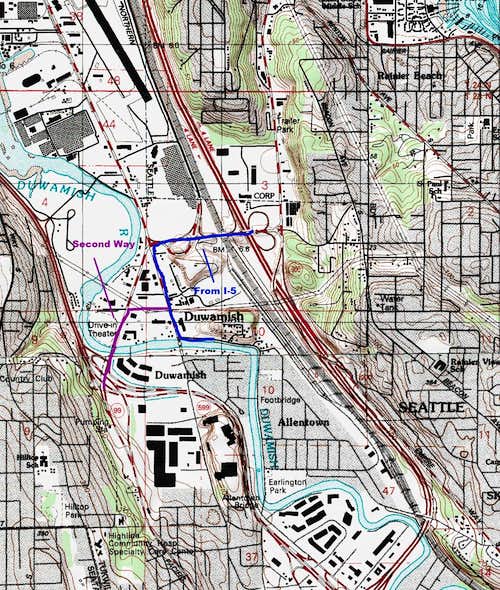 From I-5 you want to get off on Exit 158 and head west onto Boeing Access Road. Take that to the intersection with East Marginal Way and Tukwila International Blvd. Make a hard left onto East Marginal Way. After being on East Marginal Way roughly 1 mile make a left onto South 115th Street roughly 0.2 miles down the road in the obvious parking spot. Avoid going into the neighborhood to which is just east of the preserve to get a shorter hike up. There is no parking and the neighborhood frowns upon those trying to shortcut this already very easy walk.

There is also an alternative route off of Route 599. Turn off on the Tukwila International Blvd exit and head north over the Duwamish River. Make a right onto S 112th Street. From there make a right on East Marginal Way and head south. Make a left onto S 115th Street and head 0.2 miles where the parking area will be on your left. 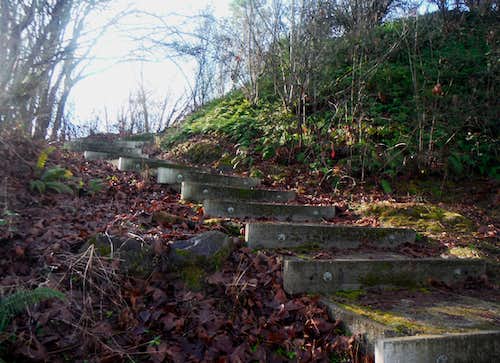 Walking up the steps

To get to this summit requires no more than a half mile roundtrip walk and an elevation gain of 150 feet. The trail starts out paved in walks around the base of outcrop before it starts going up the hill at a more moderate grade. The paved path continues up to swamp area where there is a outcrop to the north side. The paved trail then turns more into gravel and continue uphill to the point where it actually run into a neighborhood on the east side of the hill. From there take the obvious trail with well define steps to summit area where there will be a scenic loop that goes over and around the true summit. Though the view is not quiet a panorama, there are multiple areas for great views. The trail is a labor of love of volunteers that was worked on for at least six years before it actually became open to the public. To restore the Hill back to its Salish roots became incorporated onto this lovely urban trail, with the Salish tribal symbols and stories carved into the bench along the trail. It should be noted that at present there is also another trail/ well defined boot-path that comes up from the same side. It is steeper and more primitive than the main trail and may soon be phased out. 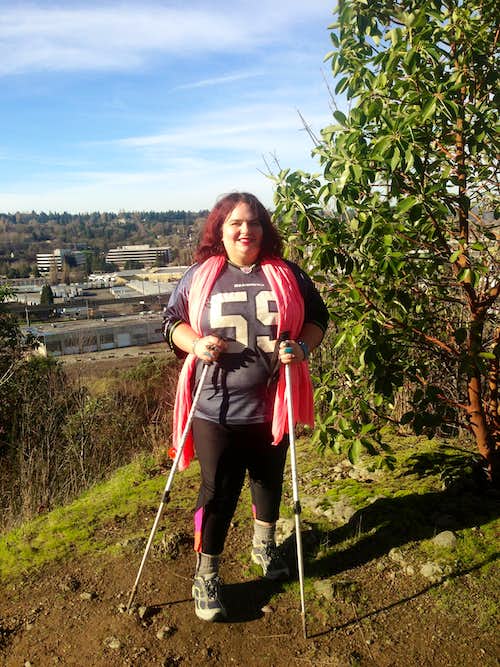 BearQueen on the summit

The Duwamish Hill Preserve is only open from dawn to dusk..

This hike can be done at any time of the year..

Camping is prohibited in the park.

For more information about Duwamish Hill in general, go to: http://www.tukwilawa.gov/recreation/pkduwamishhill.html


For information about how to help with Duwamish hill and become a friend of the hill, follow this link: