Boulder Peak from Hurricane Peak - Point 6222 on left, Boulder Lake on right
Boulder Peak (also known as Boulder Benchmark) is a 6267' (607' prom.) high point located 14 miles E/NE of Darrington, WA. Located on the north side of the Suiattle River Valley, it is overshadowed by the higher and more prominent Hurricane Peak, which lies just one mile to the north. Boulder Peak takes its name from Boulder Lake, which resides to the N/NW at an altitude of 4975'.
While more serious mountaineers will undoubtedly find Hurricane Peak to be a more attractive target, Boulder Peak will appeal to the more casual scrambler and hiker. Boulder Peak offers almost the same views as Hurricane Peak, without the need for long talus traverses, steep scree and/or snow slopes, or the potential for rockfall. In fact, almost all of the route up Boulder Peak will be on trail, or class 2 climber's path (albeit poorly defined and easy to lose in places).
To truly appreciate this area for all it has to offer, plan to spend some time (preferably overnight), and do the highly recommended Hurricane/Boulder traverse. The terrain in this area is blessedly brush-free, the views are incredible, and plentiful campsites abound. If, for some reason, you tire of exploring the high points on the ridge, there are four named lakes (plus a couple small, unnamed lakes) in the area to keep you entertained.

From Darrington, follow SR530 north for 7.4 miles to the Suiattle River Road - this will be the first right turn immediately after a bridge crossing on the Sauk River. Follow the Suiattle River Road for 8.2 miles, and turn left onto FR2660, also known as the Tenas Creek Road. Follow FR2660 to its driveable end in 7.2 miles - here you will find the trailhead for Boulder Lake. A two wheel drive vehicle is adequate for the Tenas Creek Road, but ensure that it has a reasonable amount of ground clearance. 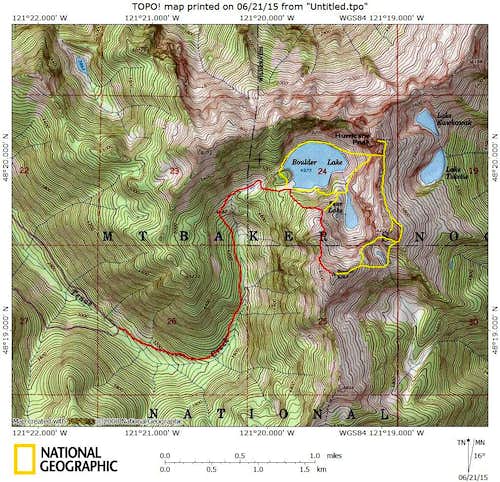 Boulder Peak/Hurricane Peak scramble routes
The trail to Boulder Lake, which for years was more of a 'fisherman's path', is now in fairly good shape, thanks to the efforts of the WTA. From the parking area, it is roughly 2.5 miles to Boulder Lake, with about 2000' of elevation gain. The trail will closely follow Tenas Creek on the west (left) side, and will alternate between steep climbing and relatively level sections. Starting at about 4600', you will come across a couple of short talus slopes, where the trail can be difficult to locate. If you simply make a level traverse through these sections, and keep your eyes open for occasional flagging, you should do a fair job of staying on route.
Upon arriving at the lake, you have a couple of options. For the Hurricane/Boulder traverse, turn left, go up and over the 5100' 'hump' on the west end of Boulder Lake (easier than the steep terrain at lake level), and follow the route described on the Hurricane Peak page.
Assuming you want to scramble up Boulder Peak the 'easy way', stay on the south side of Boulder Lake's southwest 'arm', and begin looking for a climber's path that leads up Boulder Peak's north ridge. This path is poorly defined at the start - it begins at N48 19.817 W121 19.789. (Alternatively, one could continue along Boulder Lake's south shore, and follow the path to Pear Lake.) Boulder Peak's 'north ridge trail' will stay fairly close to the ridge crest to 5400', then will make a short traverse to the east. From this point, the path (assuming you stay on it) will stay east of the ridge crest to 6000'. Truthfully, it doesn't matter if you stay on the trail at this point: Above 5400', the terrain is open meadow and rock, and numerous variations (all class 2) are possible for approaching the summit. 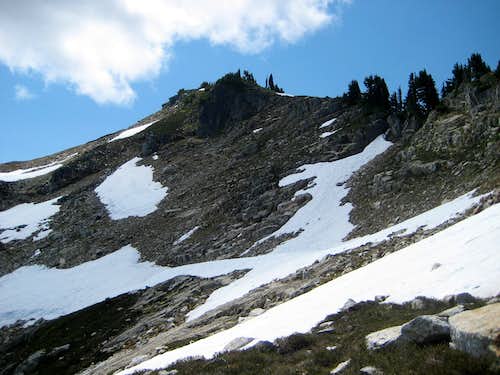 Boulder Peak summit from NW at 5800'
At some point near 6000', transition back to Boulder Peak's north ridge (this will be the steepest and most 'technical' portion of the scramble - still class 2). From here an easy path on the crest of the north ridge leads to the meadowy summit. 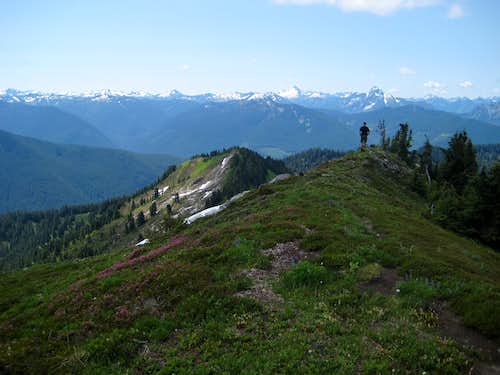 Boulder Peak summit looking south. The high point in the center of the photo marks the official end of the Huckleberry Mountain Trail. While this is certainly a possible approach for Boulder Peak, it will add substantial distance and elevation relative to the 'normal' route.
Total distance to the summit will be about four miles, with about 3200' of elevation gain. Car to summit times will be two to four hours, depending on the physical condition of your party. The summit views are grand - my friend and I agreed that Boulder Peak has one of the highest view-to-effort ratios of all the peaks we've scrambled. 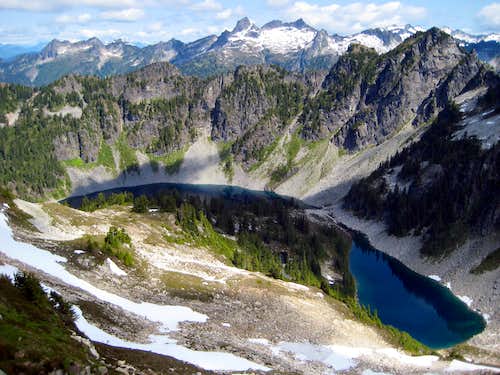 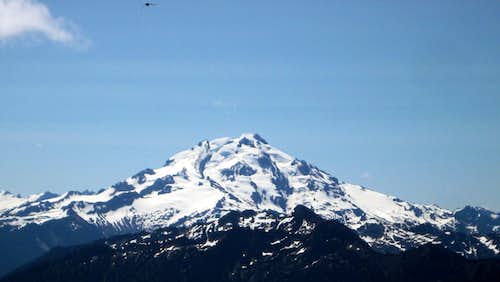 Glacier Peak from Boulder Peak - Lime Mountain in the foreground. No, that's not a giant mosquito at the top - we were being bombarded at the summit by some kind of fast flying birds - swifts, perhaps? 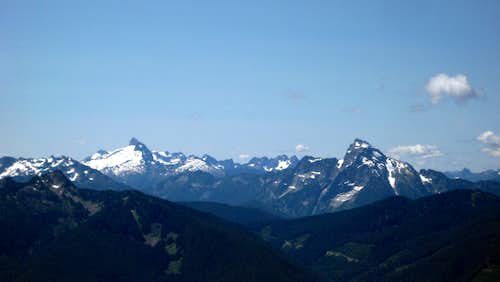 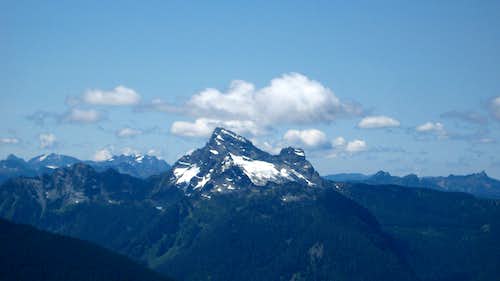 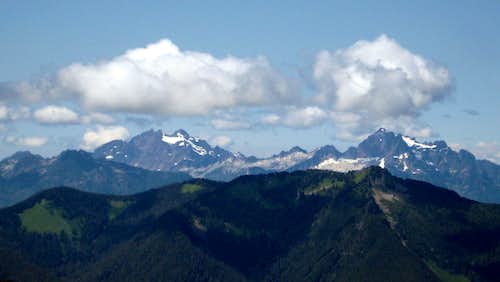 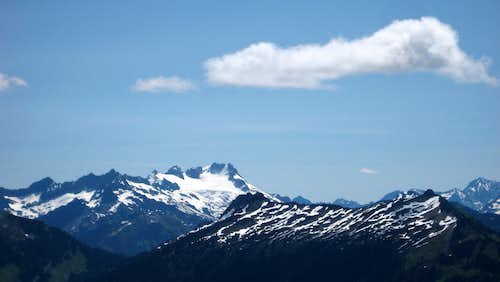 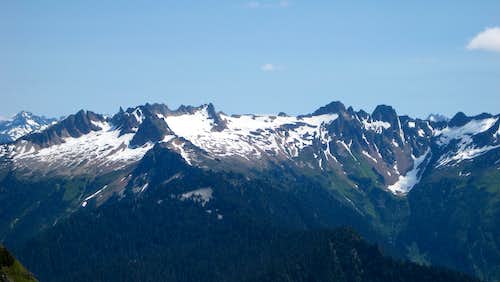 Mount Chaval and Hurricane Peak from Boulder Peak
Now for those of you who decided to do things the 'hard way', and chose the Hurricane/Boulder traverse: It is certainly at your discretion, but I would advise doing the traverse clockwise. This allows you to do the hard work of going up Hurricane Peak's gully in the cool of the day, and lets you skip going down the gully, which I think is almost as hard as going up. From the top of the gully, drop slightly on the east side of the ridge, and make a traverse south at roughly 6000'. The idea is to wrap around the south end of Point 6222 - if you have the extra time and energy, you may as well summit Point 6222 as well.

Boulder Peak and Hurricane Peak from Point 6222
From the south end of Point 6222, you have a couple of options: If you have superior navigation skills, you can work your way around small cliff bands, so as to arrive exactly at the Hurricane/Boulder low saddle at the northwest end of the small unnamed lake just south of Point 6222. 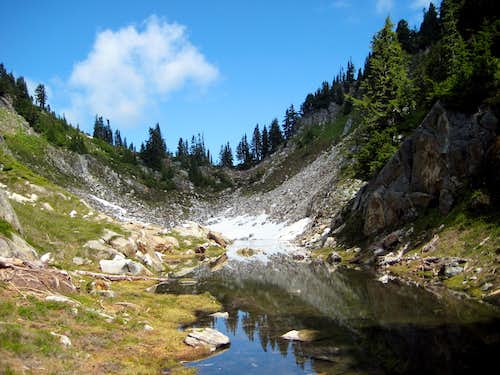 Hurricane/Boulder low saddle from SE
If, like us, you do not have superior navigation skills, just plan to cross over at the outlet end of the small lake. The grade is much gentler if you go this way, and there is only a 100' elevation penalty. Additionally, Glacier Peak is nicely framed from the SE end of the lake as a consolation prize. 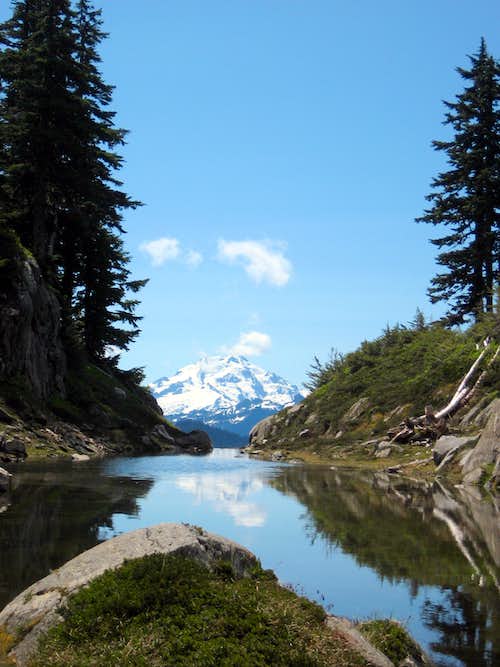 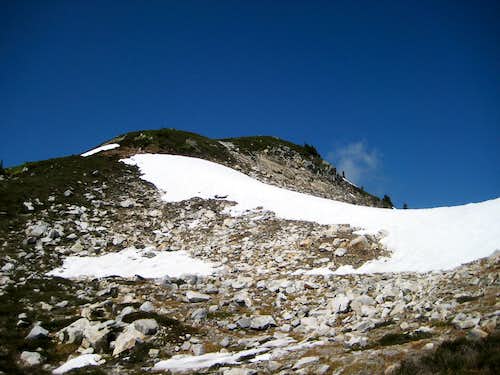 At this time, a parking pass is not required to park at the Boulder Lake 'trailhead'.

Any time you can drive a reasonable distance up the Tenas Creek Road - probably May to November most years.

There are numerous places to camp in this area - please do your best not to trash the areas around the lakes, as some have done in the past.