White Hill is located in Cape Breton Highlands National Park on Cape Breton Island and is the high point of the Canadian province of Nova Scotia.  Best described as remote, there are no maintained trails leading to the summit.  Nor can it be described as a mountain; it barely qualifies as a hill.  It is the high point of a large highlands area, in an area labeled on the topo map as North Barren.  The Cape Breton Highlands are an extension of the Appalachian Mountain Chain. 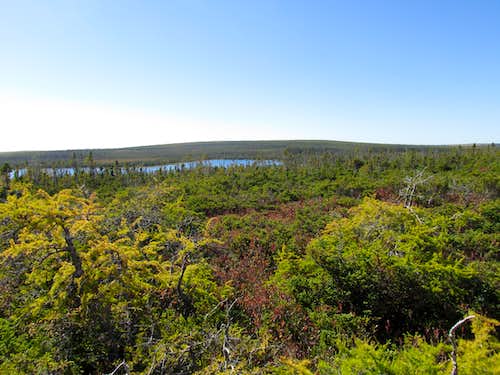 The trailheads for White Hill are in the vicinity of Ingonish, Cape Breton, Nova Scotia.

Halifax Stanfield International Airport YHZ is about 425 kilometers from Ingonish.  YHZ offers more flight choices and also has US Customs and Border Protection pre-clear.  That means if your return
flight is from Halifax to a US airport, you clear US customs in Halifax.

Unless you are enrolled in Global Entry or NEXUS, avoid Toronto YYZ on your return to the US.   US pre-clear in Toronto features a non-moving queue with a view of the “jump the line” (Global Entry & NEXUS) people strolling past.

If you are driving from Halifax airport to Cape Breton; Truro & New Glasgow offer efficient supply stops.  Without venturing too far from exits you can stop at supermarkets, banks, Canadian Tire, Walmart, NSLC (provincial liquor store) & off course Tim Hortons! 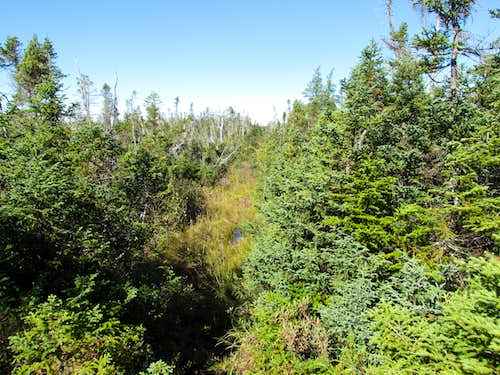 We tried this route because it is the shortest, so we felt it was the most reasonable for a day hike.  There isn’t anything resembling a trailhead.  What makes this a viable route is the maze of maintained rough 2WD gravel roads that provide access to Cheticamp Flowage.  Note:  These roads are designated as snowmobile trails in the winter.  Cheticamp Flowage is part of a network of lakes for Wreck Cove Hydro Development.  Leave the pavement south of Wreck Cove on the Cabot Trail at an intersection signed Wreck Cove Hydro Station.


Allow a couple hours to drive the 33 kilometers from the pavement to the lake. As of October 2015 this road was in reasonable shape, but I drove real slow to avoid damaging the highway tires on our rental Jeep Grand Cherokee.  There were a few spots on the road that could get rough in between gradings or during bad weather.


Look at Google Street View for an image of the Wreck Cove Hydro Station sign:

We learned of a better way to drive back to the pavement from Cheticamp Flowage. Our drive in was on the same road as last year.  The Wreck Cove road was still in reasonable shape and again we drove real slow to avoid damaging the highway tires on the rental.  If you plan on going this way I recommend studying the route, with all its intersections on Google Maps or caltopo.  I had printed the aerial image with a UTM grid (from Caltopo) so I could be sure of each intersection along the way.  I was also deliberate about not giving you every intersection in this maze.  There seems to be ongoing activity with construction and various side roads, so what might be overgrown one year, could be freshly disturbed the next.


We spoke to some hunters and some wildlife officers who each recommended an alternate route for returning to the pavement.  This alternate route has more distance on dirt, but the surface is in much better shape. Instead of coming out at Wreck Cove(near Ingonish) it meets the pavement on the Cabot trail near Baddeck.  Here is the alternate route described in the return direction with links to Google Maps.

This is where the alternate route meets up with the Wreck Cove road.  At this intersection, instead of turning left to return to Wreck Cove, we went straight.  From here the road became noticeably better.  Although there were many side roads, we always stayed basically straight with the apparent main route.

Intersection on the way where we stayed to the left.  This was the only intersection where someone was more likely to guess wrong.

Intersection with pavement. The Cabot Trail

Street View for finding this intersection on the way in.  Watch for sign: Public Firearms Range


The beginning of this hike is outside the park boundary, but you should get a park pass and register for the back-country.  The hike from the road on the south side of Cheticamp Flowage to White Hill is around 15 kilometers one-way. The first challenge is to get across the canal that connects Cheticamp Flowage with Snowshoe Lake. After crossing the canal the first 5 kilometers are mostly along the south & then east shoreline of Cheticamp Flowage.  Then the challenge is to pick up a series of old over grown roads that lead north / north-east to the vicinity of White Hill.  Prior to making this hike my plan was to leave this road when it first passed within a couple kilometers of White Hill.  After having traveled in this terrain I recommend staying on the road to a 4 way intersection in North Barren.  This intersection is with the Franey trail coming from the east. Then make a left (west) for about 3 kilometers before this road passes within a kilometer of White Hill. White Hill is then off trail to the south.

See my trip reports for more detail on this route. 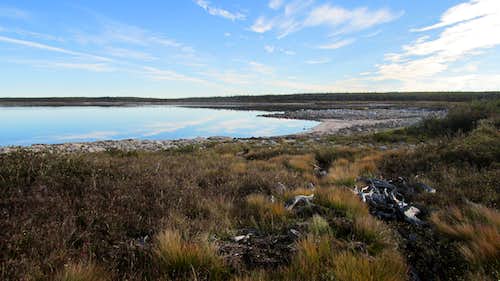 Cheticamp Flowage
I have no personal experience with the following two routes, but provide a brief description to help with your research.


The beginning of this route is on a developed trail from a signed trailhead.  Franey Road is a signed intersection on the Cabot Trail at Ingonish Centre.

The first few kilometers are on the Franey loop trail.  But most of the 19 or 20 kilometers one way are on the overgrown road that passes near Franey Mountain.  The Franey route meets the Cheticamp Flowage & Lake of Islands routes at the North Barren intersection.  Stay straight for about another 3 kilometers before this road passes within a kilometer of White Hill. White Hill is then off trail to the south.

The beginning of this route is on a developed trail from the signed Brand Pond trailhead.  After about 12 kilometers and before getting to Lake of Islands, turn left to pick up the old over grown road. This road heads southwest to meet up with the other two routes at the North Barren intersection.  Then make a right (west) for about 3 kilometers before this road passes within a kilometer of White Hill. White Hill is then off trail to the south.  One way distance is around 22 or 23 kilometers.

Note, if you plan on back-packing, much of the interior of the park is off-limits to Undesignated Backcountry Camping.  When you contact the park to register your trip they will provide a map showing the allowed camping areas.  Depending on your route, you will still have from 8.5 to 12 kilometers remaining to the summit from your closest possible campsite. 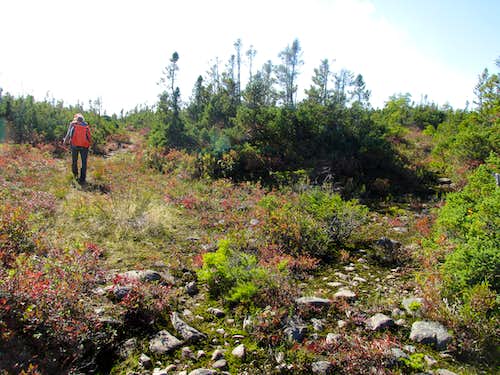 White Hill is in Cape Breton Highlands National Park. There are fees for entering the park and forms to register your trip plan if you are heading into the back country. The park officials want to know when you will be entering the backcountry and have you check out on your return.

When I contacted the park I found the staff to be very accommodating & helpful. They emailed me the forms to complete our trip plan and emergency contact information.  I was then able to pay the backcountry fee with a credit card and have the Pass / Receipt emailed to me.  In addition to the required forms a park employee with some backcountry experience called to answer questions specific to hiking in the park.  Note the park visitor centers are open from mid-May to Oct 31.

White Hill is best climbed summer through early fall.  Lacking maintained trails, this area would be nasty with snow cover.  The swamps are probably best left time to dry out in the spring. 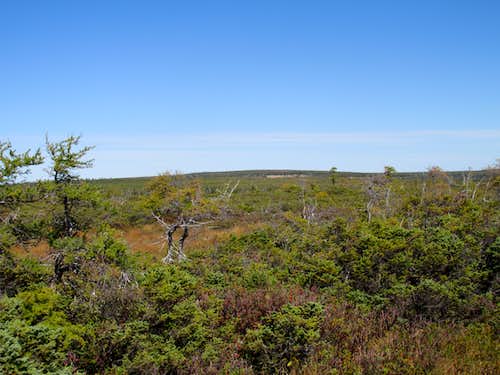 White Hill from the south

If you plan on back-packing, much of the interior of the park is off-limits to Undesignated Backcountry Camping.  When you contact the park to register your trip they will provide a map showing the allowed camping areas. Depending on your route, you will still have from 8.5 to 12 kilometers remaining to the summit from your closest possible campsite.
Additionally Cape Breton National Park offers organized car camping sites.
http://www.pc.gc.ca/eng/pn-np/ns/cbreton/activ/camping.aspx

You’ll want to stop at a bank and get Canadian cash. You can generally spend American cash in Canada, but you won’t always get a fair rate of exchange. Don’t be afraid to leave US $ in a tipping situation. The Canadian will get at least the same rate you would at the bank, but many Canadians just hang onto American cash so next time they go to the States they don’t have to change as much. You’ll probably get a better rate changing your American money at a bank in Canada than in the US. And of course airports tend to have an exorbitant spread between buy & sell. Remember your credit card will probably pop you an extra couple % on foreign transactions. But if you do much foreign travel, check with your bank to see if they have a card that doesn’t charge the foreign transaction fee. 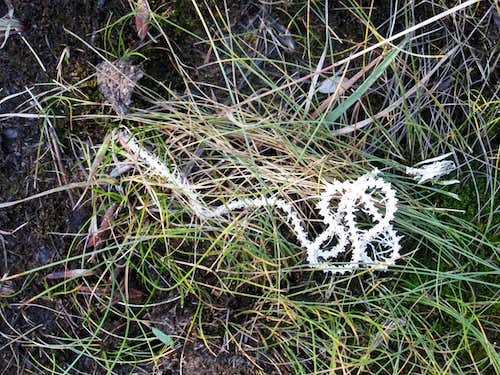 Please realize that even though there is a National Park with several hiking trails, White Hill is in an un-maintained back-country area without maintained trails. There are some decades old overgrown roads and survey cut lines being reclaimed by the vegetation and swamps. In some places willows have completely obliterated the track. In other areas there never was a track and one has to navigate the wild vegetation. Tuckamoor is an obnoxious evergreen bush-tree whose branches intertwine with adjacent tuckamoors. Where there is a track, it is essential you re-find it each time you get pushed off. It is possible to not see the track when it is only a few meters away.

We didn’t see anyone all day during our hike until we were almost back to our vehicle. A satellite beacon like a Spot or InReach is strongly recommended. It is a no bar zone for cell phones. You might get an occasional moment of signal for a text but a voice call is unlikely. 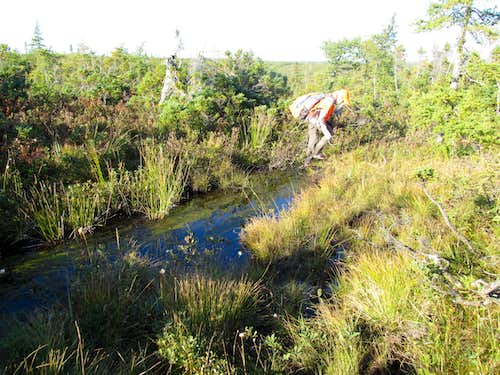 Navigating past a Wet Spot

I printed the area I needed from caltopo
https://caltopo.com/map.html#ll=46.68656,-60.5418&z=12&b=t
In addition to printing the topo map, I downloaded from caltopo the Garmin compatible topo file for my GPS. I also strongly recommend printing the aerial photos for the area. They show some of the cut lines that aren’t plotted on the topo maps. If you print the aerials from caltopo instead of Google you have the option of the UTM grid. This was really useful for driving the back roads to Cheticamp Flowage. Note, these gravel roads are shown as snowmobile routes in the winter. 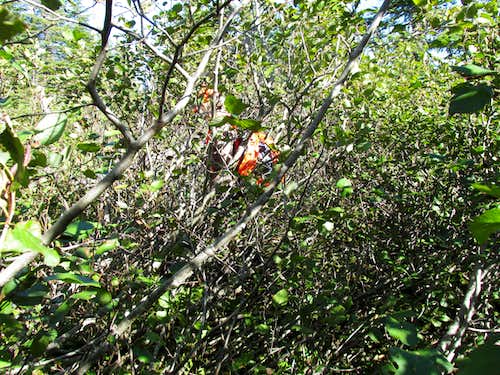 The few people we did see at the end of our hike were hunters. Hunting isn’t allowed in the National Park, but Cheticamp Flowage is outside the park. So if you approach from Cheticamp Flowage I recommend checking on the hunting seasons and wearing blaze orange. 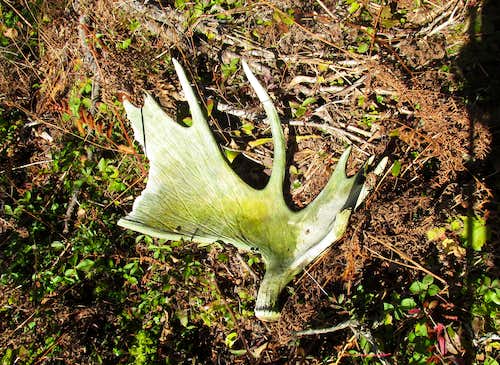