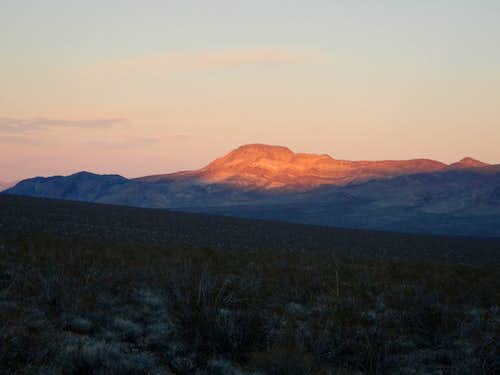 Brown Peak Southwest Face At Dusk
Brown Peak is part of the Greenwater Range located at the southeastern border of Death Valley National Park.  It ranks number 70 on the Sierra Club’s Desert Peak Section list.  The mountain was named for Charles G. Brown, an early resident of Brownsville. The town of Brownsville is known today as Tecopa since it was renamed in 1877 for Chief Tecopa, a spiritual leader of the local Pauite people. Brownsville was established by William D. Brown and Robert D. Brown, early prospectors of the Resting Springs area. The Brown brothers struck it rich in 1875 with their prospect which they named Balance and quickly founded the Balance Consolidated Gold and Silver Mining Company. 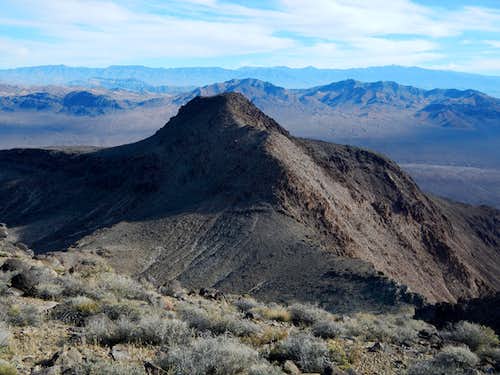 The Northeast Peak Viewed From The Summit
Anticipating a localized gold rush the Brown Brothers quickly established Browsnville, and just as expected, 400 prospectors soon inhabited the town. Charles G. Brown initially lived in Brownsville which coincidentally carried the same last name as his, before moving on to Greenwater and then Shoshone where he became the sheriff. He was an influential member of the community and later served as a California state senator for 25 years. The general store in Shoshone, as well as Highway 127 and Brown Peak are all named after him. 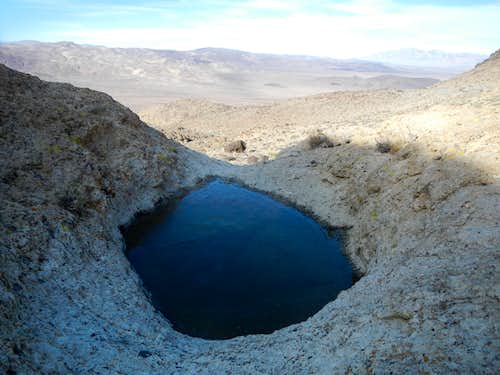 Water In The Desert
The first recorded ascent of Brown Peak was made in 1949 by a survey party. However, this is almost certainly not the first ascent of the peak. The whole area was widely explored by prospectors and native people also likely ventured here on hunting trips well before recorded history. The mountain is not exceptionally high or difficult to climb and makes for a great view point. These factors combined are suggestive of earlier ascents. 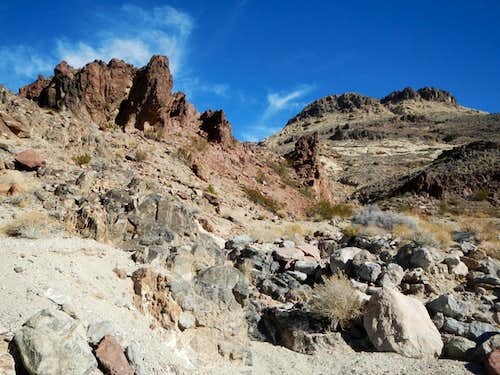 Interesting Rock Formations
The standard west route up the peak starts on the Deadmans Pass road west of the peak and ascends 1950 feet in 3 miles. It is a class 2 route however there is class 3 potential without exposure depending on your route-finding choices. 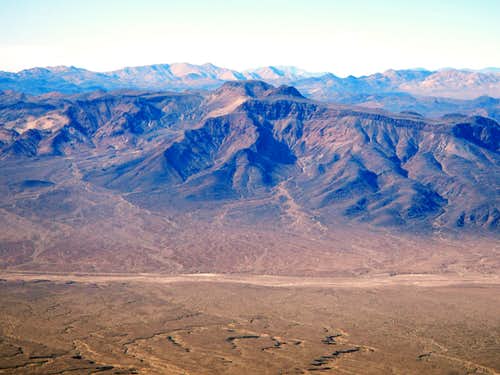 The East Face
For those without high clearance 4WD vehicles, or if the Deadmans Pass road is closed, the east face and ridges are the only other option.  The distance and gain are greater on that side.  Check out Bob Burd's trip report from 2008. 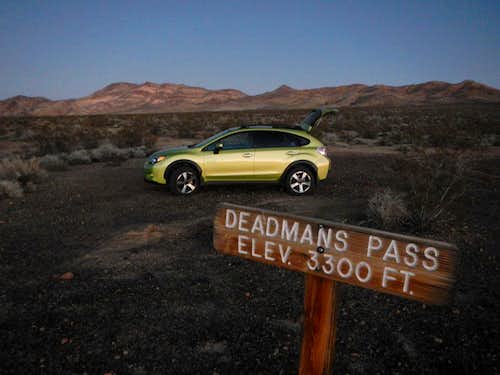 Deadmans Pass With Brown Peak In The Distance
From the parking area you should see Brown Peak off to the east as the obvious high point with Point 4620 to the right (south) of it. Point 4620 is recognized by its various colored striation layers. 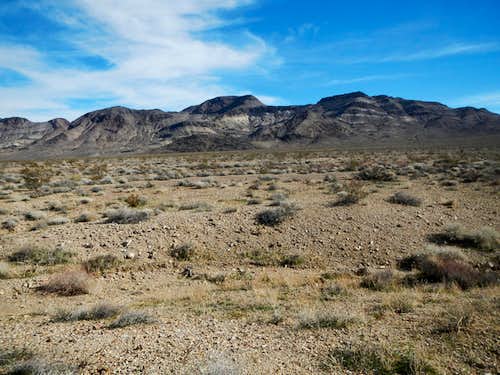 Brown Peak From The Parking Area
Below Brown Peak you should see a blackish mound which will be the first thing you come to after crossing the open desert. Aim for the right side of this gentle mound and pass south of it going over a small pass and then drop down into the main wash west of the peak. Chalcedony geodes can be found here. 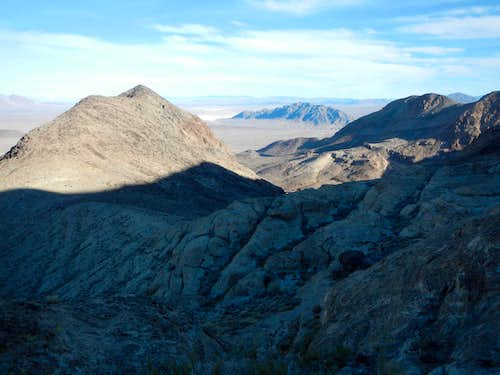 Point 4210 and The Pass At 3950 Feet
From the head of the wash ascend a gully northward or along the left side of it to a small pass just east of Point 3820. Turn east and ascend a slabby ramp to another pass at 3950 feet, south of Point 4210. From this pass you should be looking at the northwest face of Brown Peak. 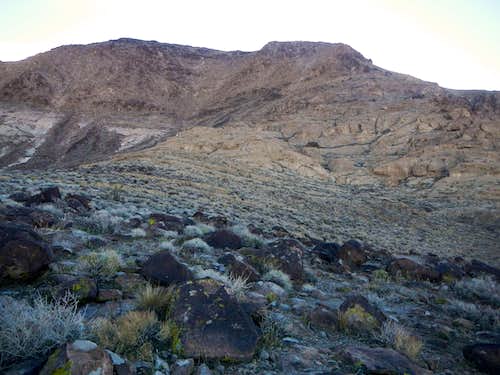 From the small town of Shoshone head north on the Highway 127 and turn left after 1.7 miles onto Highway 128 / Jubilee Pass Road. Continue west for 5.8 miles and turn right onto the dirt road (Greenwater Valley Road / Furnace Creek Washington Road). Follow the Greenwater Road northwest for 10.1 miles and watch carefully for a potentially unmarked dirt road heading northeast on the right side. This is Deadmans Pass Road. It is sandy and has deep tire ruts and might not be suitable for 2WD or low clearance vehicles.
Turn right and continue for another 6.4 miles driving over Deadmans Pass along the way. Look for parking along the east side of the road, but do not block the road. Brown Peak should be visible to the east. Alternative you can try to find the northern end of Deadmans Pass road where it intersects Highway 127. This is easier said than done since it is very hard to spot the road from the highway and might also be confusing to follow in the southern direction. That intersection is located at (36.210958, -116.396034).

When to Climb / Red Tape

Do this hike in the winter months and carry plenty of water. Never attempt it in the summer or the shoulder seasons.
ATTENTION:  Torrential rains in October of 2015 may have washed out parts of the Deadmans Pass Road.
Please contact the Furnace Creek Ranger Station for more information (760) 786-3200.

We found the Deadman Pass Road with just a few deep ruts in March of 2022. I would NOT drive it with passenger vehicle, but high clearance would be OK and almost easy for 4WD.