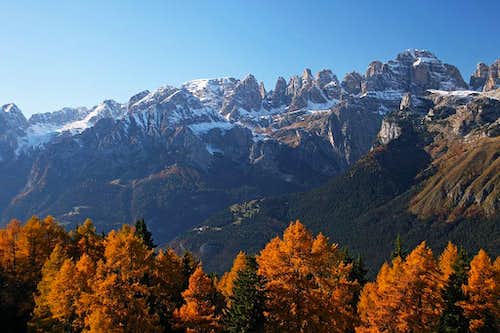 Paganella above the Adige valley
Paganella (Cima Paganella, La Paganella) is a nice mountain massif in Trentino, similar to the other smaller massifs, like Monte Bondone, Monte Casale, Monte Stivo and others. Its rock structure is similar to these groups, but in a geographic sense the massif belongs to the larger Brenta group. In terms of beauty and mountaineering importance Paganella can of course not rival other main mountains of Brenta group, but it excells in one thing - from its top one has perhaps the most beautiful view on Brenta chain from the eastern side. The famous dolomitic chain looks like a parade of spires and towers, up to 1000 meters higher than the viewpoint.

Otherwise the whole massif of Paganella is much degraded by modern civilization. Mountain roads (closed for public traffic) are reaching the top, the whole western and northern sides are criss-crossed by ski pistes, cable ways and chair lifts, on one of the main summits (La Roda) there is a whole forrest of telecommunication towers. In summer and winter the summit must be crowded, peple ski down, bike down, walk around or just enjoy the panorama. But there are also silent parts of a season. We ascended on foot end of October and were the only visitors. Only a few locals were busy with preparations on the coming ski season.

The massifs of Paganella and nearby Monte Gazza, 1985 m, are separated from the main massif of Brenta by the Giudicarie valley. In the upper part, above Lago di Molveno, there are villages of Molveno, Andalo and Cavedago. That's the NW side of the massif, mostly gentle and overgrown with dense vegetation till the very summit. The SE side is much different. On its top it has a few hundred meters high, almost vertical limestone walls, very appropriate also for climbing. They are nicely seen from the main valley around the town of Trento. Otherwise the slopes are falling down into the Valley of Lakes - Val dei Laghi and on the north into the main valley of Adige. The altitude difference of these faces is as much as 1900 meters.

In the massif of Paganella, a few elevations can be found. In addition to the main summit, there are also: La Roda, 2104 m, Cornetto di Pra Grande, 1884 m, Becco di Corno, 1880 m, and a few others. On the SW the massif ends on Passo di San Antonio, 1893 m, beyond which the massif of Monte Gazza begins.

Great is also the view towards the north

Southern views
As said, the most beautiful part of it is the view on Brenta, stretching on the west. But very picturesque is also the northern view, flying all the way up the valley of Adige. In the distance the glaciated summits of Zillertal and Stubai Alps can be seen. On the southern side the most attractive is the quite distant Garda lake, lying deeply among its steep mountains. And on the east many mountain groups can be seen, from Dolomites down towards the groups on the south.

The majority of visitors ascend on top from the north, northwest and west. They may use cable cars when they operate, or start hiking tours. The trailheads are all on the good mountain road, connecting the village of Fai della Paganella and Andalo. Some of them are:

It is no use describing them here (I also haven't that experience). There are many marked hiking paths and many parts of the ascent routes also follow mountain roads. In all cases required times will be up to 3 hours, unless if you attempt longer crossings of the massif. We started the hike on the road above Andalo and a nice path, marked as F14 took us uphills towards the SE, crossing a few mountain roads. Then it turned right, converting to a mountain bike descent piste (and tour ski / snow shoes track). After a longer crossing it brought us on Malga di Zambana, 1792 m. From there on we simply followed ski terrains to the top (we missed the direct marked path).

For planning hikes, you can use this Kompass online map:
http://www.kompass.de/touren-und-regionen/wanderkarte/

For rock climbing the eastern and southern walls are appropriate. Those limestone walls (just below the summits) are up to 350 m high, hosting many routes. Some of them were done by the best climbers of their time, such as Bruno Detassis and Cesare Maestri.

A good online source for climbing (in Italian) is Arrampicare in Paganella.

Paganella can be ascended any time of a season. If you want to avoid crowds, you can ascend in time windows between the ski season and summer season (spring and autumn).

On the upper slopes there are many mountain huts and restaurants:

Restaurants are along the mountain roads and near cable car stations, also on the very top of Paganella.