Mollie's Nipple. Ah, but which one? There are numerous Mollie's Nipples scattered across Utah. According to Wikipedia: "Mollie's Nipple is the name given to as many as seven peaks, at least one butte, at least one well, and some other geological features in Utah." This is the peak (and yes, it does resemble a breast, complete with nipple) above Hurricane, Utah. It is a prominent landmark in Washington County, visible from Hurricane, St. George and Washington City. As a hike, it is a steep grind up a thick layer of limestone (with lots of fossils) to a summit plateau, finishing with an easy scramble up a columnar basalt cap. The trail is approximately 1.25 miles in length with 1300 feet of elevation gain. 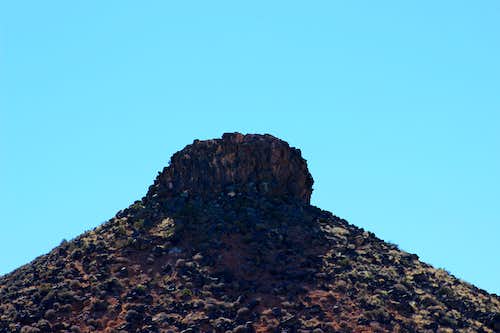 From the Desert Rat outdoor retail store on the corner of St. George Blvd. and Bluff Street, drive east on the boulevard for 1.7 miles, take Interstate 15 north for just over 9 miles to Exit 16 (Hurricane and Zion exit.) Drive east on SR-9 for just under 9 miles to the town of Hurricane. Turn right on S. 700 West/Airport Rd. and drive for south for 2.4 miles. Turn left onto 540 West, drive 150 feet, turn right onto S. 675 West, drive to the end of the street then turn left onto a short spur road. Park here.
Google Map direction here.

Northwest Ridge: Look for a rickety gate south of the road. Pass through the gate and drop down into the wash. Head south towards the slope leading up the mountain. A well worn path should be readily visible as you get closer to the slope. Follow this up the face, switchbacking as you quickly gain elevation. Soon you will come to a broad ridge with a fork in the path. Take the right hand fork heading up the mountain. The trail is dusty, crumbly and loose. Keep gaining elevation. As you hike, pay attention to the rocks at your feet, and you will probably find some cool fossils. I have found some nice crinoids here. Eventually the path begins ascending rockier terrain on the crest of the ridge. Keep ascending. After about 3/4 of a mile (and something close to 1000 feet of elevation gain,) you will top out on the summit plateau, with the flat cone of the summit half a mile away. Follow the trail to the base of the cone and ascend up the east side of the peak. A final easy scramble up through the basalt blocks leads to the flat summit. Superlative views surround you: northeast to Zion, east to Smithsonian Butte and Canaan Mountain, west to Sand Hollow, St. George and the towering Pine Valley mountains, north to the Kolob plateau and canyons of Zion. 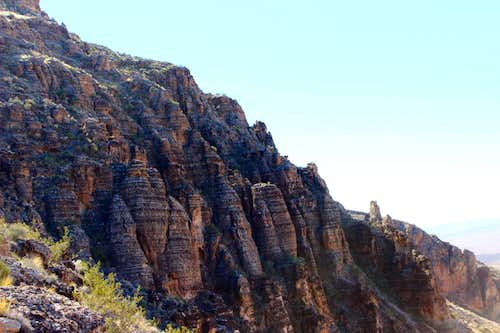 This is a four-season mountain, but like most of the lowland peaks in southwest Utah, an early-morning or late-evening ascent in summer will reduce the risk of heat stroke.

Almost the entire mountain is BLM territory (starting at the western base of the mountain) which means dispersed camping is allowed. Just follow these rules:
BLM map here.
Sand Hollow State Park is the closest established campground, and is an awesome place to camp! 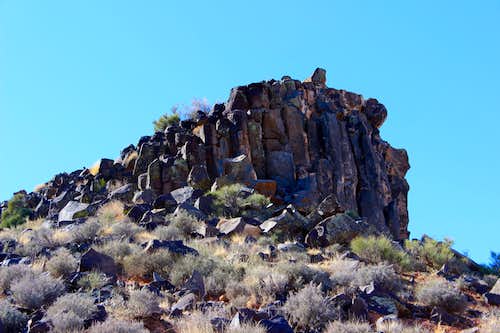 Wikipedia article on the various Mollie's Nipples in Utah.
Still Exploring page for Mollie's Nipple.
No Filter episode of Mollie's Nipple (full disclosure: I am a reporter for St. George News, so this amounts to some shameless plugging.)
Weather for Hurricane, Utah.
Guidebook: On and Off the Beaten Path by Eric Hansen 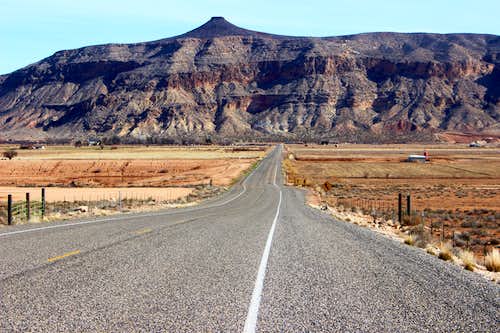