KT-22 is the first major summit seen on the south side of Olympic Valley, California when driving in from the access road off of Highway 89 and is located within the Palisades Tahoe Ski Resort.  In fact, KT-22 has ski runs on its north face.  Many people go up near the summit of KT-22 during the ski season, but not to the actual top of the mountain. A winding ski road goes up to 70’ below the summit.  A rock scramble will get you to the actual summit from the road.

KT-22 is a favorite among locals.  It can be accessed from Olympic Valley or from the Five Lakes Trail just east of Alpine Meadows.  From KT-22, you can also access nearby Olympic Valley Peak 8,885’ and Emigrant Peak 8,800'. 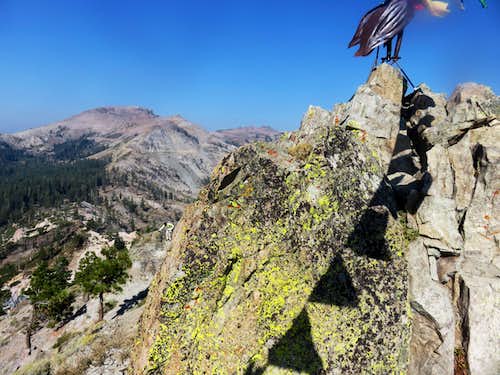 KT-22 has excellent views of the Olympic Valley region and into the Lake Tahoe Basin.  It is usually snow-covered from December through early May; particularly the north face.  The ideal time to hike KT-22 is in summer and early fall.  June or September being the best months.

There are two primary routes for KT-22.  The first is from the Olympic Village in Olympic Valley, while the second is from the Five Lakes Trail. From Truckee or Reno, take Interstate 80 to CA State Route 89 going south.  If approaching from Olympic Village drive 8.5 miles to Olympic Valley Road. Follow Olympic Valley Road Westward for a couple miles until just before you enter the village. Take a left and head towards a large parking lot east of the Red Wolf Lodge. A dirt road behind the parking lot at the base of the mountains leads towards KT-22.

For the Five Lakes Trail, it is 10 miles south of I-80 and about 1.5 miles south of the turn off to Olympic Valley. It is about 3 ½ miles north of Tahoe City if coming from Lake Tahoe. The Five Lakes Trail is about 2 miles up the road, across the street from Deer Park Drive. There are usually lots of cars on the side of the road near the trailhead.

From Olympic Village, take the dirt road at the base of the mountain behind the village. Follow for about a half mile until the road finally switchbacks back to the left.  After another tenth of a mile you reach a Y-junction.  Take the left fork, which will lead up KT-22, switch-backing steeply up until just below the summit. 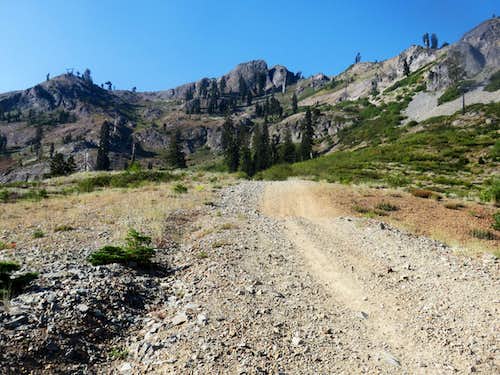 You need to scramble up some rocks to the summit plateau, and then scramble up the final summit block.  This requires an elevation gain of just over 1,900’ and about 2.7 miles.  Once back on the road, it is pretty simple to continue west towards Olympic Valley Peak and the High Camp area, and then loop back down to the valley.

From the Five Lakes Trail, you have a few options.  KT-22 towers above the trail on the way.  But you have to get past it, and approach from the west ridge.  You can take the trail for a little over a mile and scramble up, which is pretty steep, but on good rock.   Or you can go over 1 1/2 miles and do a short, tenth of a mile scramble up to the ridge on the granite rock, gaining over 230'.   Or you can scramble up the ridge from somewhere in between.  Either way, the one-way distance to the summit is between 1.6 miles and 2.1 miles, gaining about 1,530'.  Once on the ridge, a trail heads up to the road just below the summit.  From the ridge, you can also head to Olympic Valley Peak.  If doing Olympic Valley Peak first, you'd want to ascend about 1 1/2 miles up the Five Lakes Trail. 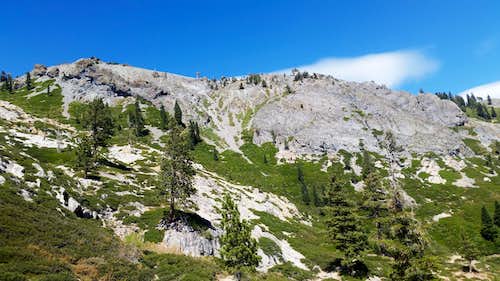 KT-22 from just above the Five Lakes Trail 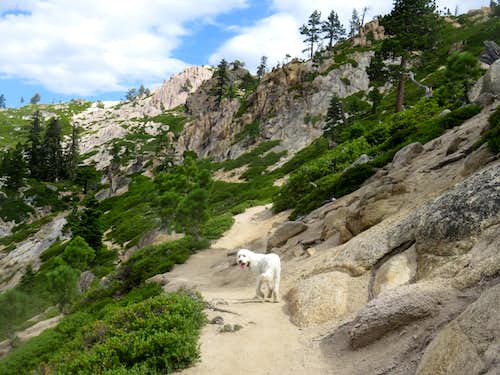 Hiking up the Five Lakes Trail

No permits or restrictions apply for a day hike of this peak when ski season has ended.