Kino Peak is arguably the most dangerous peak in the Sierra Club's Desert Peak Section (DPS) Peak List. The danger doesn't stem from the typical hazards of a remote desert scramble, but rather it's proximity to the Mexican border and location along a drug-running route. In 2002 park ranger Kris Eggle was shot and killed in the park while pursuing members of a drug cartel, resulting in a closure of 75% of the park in the interest of public safety. For years, only the eastern portion of the park was accessible, and Kino Peak was "suspended" from the list, technically illegal to climb with the closure in effect. In response to Kris Eggle's death, the park service began construction of a border wall in 2004, completed in 2006. Hardly the wall of Trump's dream, the steel fence stands about 3-4' high and mostly serves as a barrier for illegal off-road vehicle travel from the border across the monument, while still allowing animals, and people, easy passage through. The border patrol presence of the area increased from 50 to nearly 500 officers, and multiple towers were built along the monument border. Finally, after 11 years, the park service announced the illegal activity through the area had dramatically decreased to the point that the entire monument would reopen to the public, and Kino Peak was reinstated on the DPS list shortly thereafter. The border wall does nothing to slow foot traffic across the monument. In fact, a quick glance at a map shows the mountains form a natural funnel into the Bates Mountains and the canyon just below Kino Peak. Climbers that have been through the area since it was reinstated report fresh trash, suggesting that although illegal had decreased, it still continued through the park, although no climbers had reported an actual encounter since the suspension was lifted.

To get to Kino Peak, head south on AZ Route 85 from Gila Bend through the town of Ajo. About 2 miles south of town, turn left onto Darby Mine Road, which eventually becomes Bates Well Road after a 4 way intersection about two miles in. The dirt road is in good shape and 4WD is not required. A passenger vehicle could probably manage it with a lot of patience but high clearance is recommended. Follow the road 19 miles into the Bates Range to the signed turn off for Bates Well. You can either park at the well if following DPS 'Route A,' or continue another 2 miles west to an old closed dirt track if approaching from the NW and 'DPS Route B.' 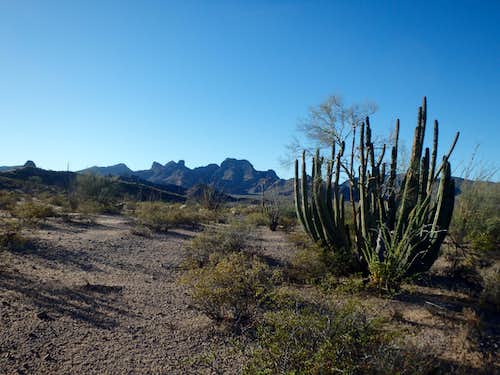 Kino and Organ Pipe Cacti
Approach:
The approach for DPS Route A is easiest, although there is a significantly higher chance of an unwanted encounter, as it utilizes the same trail as those heading northbound through the range. From Bates Well, angle slightly southwest around several small volcanic bumps and hike into the major canyon running north-south. Hike several miles into the canyon to a saddle with Kino up to the right (SW). Climb slopes directly above the saddle, or work into a drainage just southwest of the saddle to reach a notch on the long ridgeline of Kino Peak. Work around a large, blocky false summit by traversing along the east face to a second notch on the ridgeline and intersection with the approach from the NW.
The approach is a bit more tedious for DPS Route B with really no trails to utilize. However there is a significantly lower chance of encountering any others en route, so this may be preferable. Mileage between the two approaches is comparable. From the parking area, hike south through the open desert, crossing over the shallow saddle between the two largest desert hills in the immediate area. Continue heading towards Kino Peak, crossing over the lush and sandy Growler Wash. Once over Growler wash, clear another small hill to the right and begin angling west into the canyon. Make note of a large desert pinnacle to the north, it can be a helpful aid in navigation on the return. Hike directly up canyon taking the main left branch as it starts to narrow. Shortly after the branch, there's a number of dry falls to overcome, completely overgrown with brush. While you could swim up the thorns to get over the various falls, it is much easier to climb the volcanic ledges on either side of the canyon (left seems to be easiest) and drop back to the canyon floor once beyond the obstacles. The notch should be directly ahead above the headwall. You can either climb the headwall directly to the notch, meeting up with DPS Route A, or climb the slight less steep ramp to the right, which will put you on the ledges at the start of the scramble. 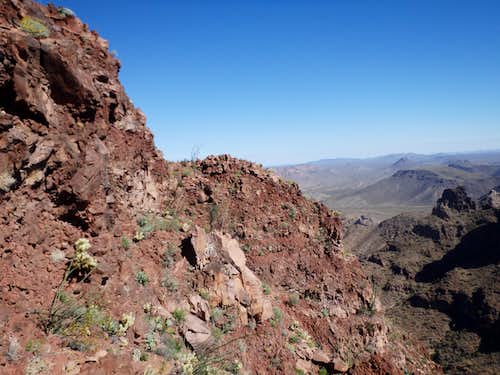 Scrambling volcanic ledges
The Climb:
From the notch, make your way to the sloped ledges to the west, traversing around the north face. There is a bare, dry fall almost immediate on the rock face- resist the urge to find a way up and continue another 100' or so to a corner marked with a cairn. Climb easy class 3 straight up to the next tier above. Continue traversing west, utilizing the cairns to find a class 2 break in the cliffs to reach the next tier. Make note of this spot for the return. At this point the route is a bit more forgiving, but the easiest way seems to meander slightly back to the east before gaining the main ridgeline. Once on the ridge, it's an easy 10 minute walk to the highpoint.

Bates Well Road is inconsistently seasonally closed during Sonoran Pronghorn Breeding, typically starting April 15th. Border Patrol has the authority to close the road at any time if conducting a mission in the area. There is a self serve pay station along Bates Well Road as you cross into the monument, price of admission is $12, although I highly recommend the America the Beautiful Pass for $80, good at all NPS, Forest Service and BLM land for one year.

Late Fall through early Spring are the best times to climb. Summer is dangerously hot for such a long and remote route, and there are no water sources available.

Organ Pipe National Monument has both a developed and primitive campground available. Backcountry camping is allowed in the monument for a $5/ person fee, although this is highly discouraged given the illegal acitivity in the area. 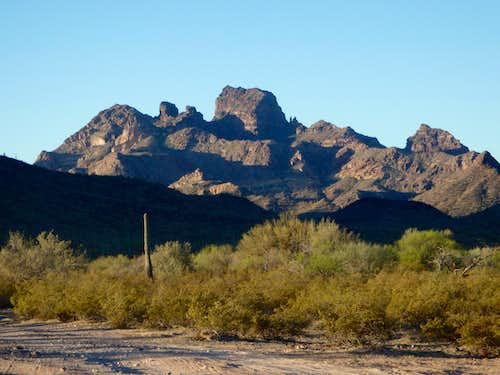 Trip Report from the NW: The Mountains Are Calling
Bob Burd's Trip Report