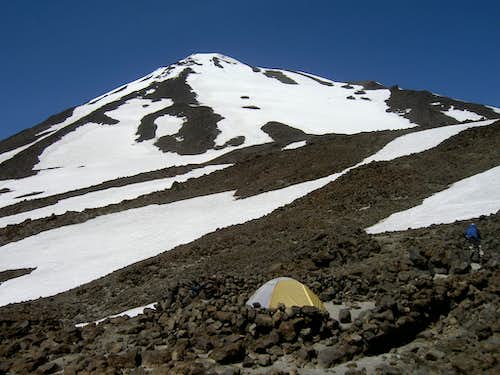 Mt Adams from Lunch Counter Camp
This year (2005) the west coast enjoyed weather system after system throughout June and well into July. It was only around about the middle of July that the long range forecast began to look anything like reasonable. After an enforced idle month, I was ready for anything and, since my usual climbing partner wasn’t available, decided to go off down to Washington and solo Mt Adams (3742m). Happily, however, a last minute posting on the ACC list server produced a response and I was delighted, as well as privileged, to enjoy Don Morton’s company for the trip.

Don and I left Victoria on July 18, headed initially to Randle, WA and then drove over forestry service back roads to Trout Lake where we spent the night. This approach route gave us several excellent views of our objective. 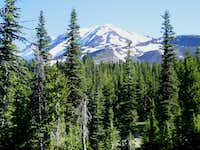 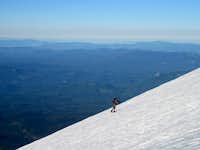 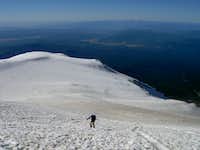 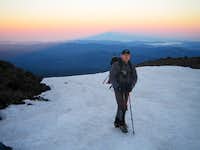 Many people summit Adams as a day trip. If the weather cooperates, though, the trip is stunningly beautiful and better enjoyed at a more leisurely pace. We left Trout Lake at 7am and drove up the half hour or so to the Cold Springs campground where the trail starts. I use the word “trail” advisedly. This being the US, it’s more like a road and it took us to within half an hour of the Crescent Glacier, which is the normal approach to the standard South Spur route. At the top of the Crescent is a relatively flat area known as the “Lunch Counter” and this is where we had planned to camp for the night. It took us just over 4 hours to walk up from the trailhead to Lunch Counter. Just in time, in fact, for lunch. I suppose we could easily have gone on from here to the summit and back to camp the same day. However, at this hour and time of year the snow is soft and makes for hard going and, anyway, the weather was perfect, the situation idyllic, the humming birds (even at 9000 feet) a delight, so why push it? There was no-one else around and it was hard to imagine a more perfect situation than lying there in the sun, looking up the next day’s route and admiring the views of Hood and St Helens. The afternoon slipped away peacefully and left me (for once) in perfect harmony with the world.

The next day we got up at 4am to a breathtaking bright red moonset. With such an auspicious beginning it was hard to imagine the day ahead being anything other than perfect. And so it proved! We were off at 5.15 and, after only a short scramble over a rocky bit, were able to put our crampons on at 5.30 on absolutely perfect, hard snow. Another treat awaited us at this point as the sun began to rise and cast Adam’s shadow 30 or 40 km to the west and onto St Helens. Spectacular! The South Spur route is crevasse free, never more than 30 degrees of gradient and with such perfect snow conditions nothing other than a pleasure to be on. We cramponed all the way up, made the false summit, Pikers Peak, at 8.30 and thereafter it was a short hour to the true summit. The old firewatchers’ shack up there was barely visible except for what I assume were the remains of the chimney, which protruded through the snow at exactly the position of the summit. The wind was a bit strong to hang around too long although the views argued strongly in favour of lingering as long as possible. The Sisters, Jefferson and Hood to the south, St Helens to the west, Rainier dominating to the north and, yes, just peeping above the far northern horizon, Mt Baker. The stuff of goose pimples indeed! We set off down just after 10am. It was still icy, so crampons stayed on until Pikers. To this point we had had the mountain entirely to ourselves. It couldn’t last of course and neither did it. As we looked over the shelf at the top of the South Spur, a line of climbers was heading towards us. Oh well, we enjoyed our solitude while it lasted. By this time the snow had softened and it was off with the crampons for the 900m glissade back to Lunch Counter, reputedly the longest in the Cascades. A couple of “wee-hees” and a lot more “oh sh**s” later and we had reversed in 20 minutes what it took us nearly 3 hours to climb. Tough to argue with that kind of efficiency.

A leisurely lunch at the Counter, pack up, stroll down and we were at the car by 4.15.

In my book the only way to end such a successful trip is a “treat night”. So off we went to the Columbia River Inn in Hood River, a good dinner, a stroll along the river in the contented state that only a perfect trip into the hills can bestow and, finally, the bliss of a soft bed. Ahhhhh

Sounds like one of the trips that leaves you wondering how it all worked out so perfectly... A truly viable advertisement for mountaineering. You should delete this report, lest the mountains be absolutely over-run with people!