Ruvicha, Brian, Steve and I met in Bishop on August 11 for our annual visit to the Sierra Nevada. We dubbed this year’s hike series the 2014 TWT – Terror and Whining Tour. Terror, because that’s the feeling each of us gets when peering over the edge of a lot of exposure (yes, a strange affliction for guys who enjoy hiking high mountains). Whining, because that’s something we are really, really good at, be it over sore feet, false summits or the closure of Bishop’s Whiskey Creek, our favored restaurant for victory dinners – whether or not we had victories to celebrate.

Ruvicha had secured a great site at the Four Jeffrey Campground, within easy driving distance of the trailheads for our first three hikes. The first aimed for Cloudripper. Steve and I made it to the top of Vagabond Peak, but the day was late and our legs were fading, so Cloudripper would remain for another time. (As official recorder of the TWT hikes, I had to resist revisionist attempts by others on the team to proclaim Vagabond Peak the original objective.)

Our second hike targeted Bishop Pass and Mt Agassiz, on the pass’s eastern flank. We got an early start from the parking lot at South Lake, which was good, as it turned into a really long day for a couple of us. The trailhead was clearly marked at the south end of the parking lot, overlooking South Lake, whose extremely low level showed the full effect of California’s third year of drought. 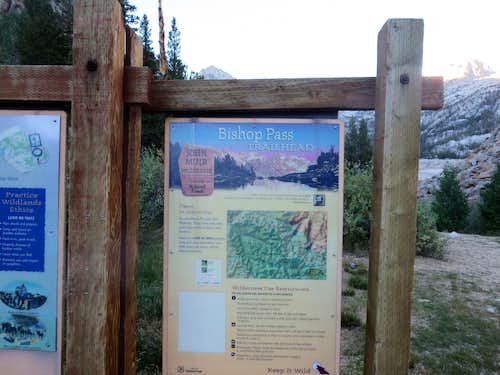 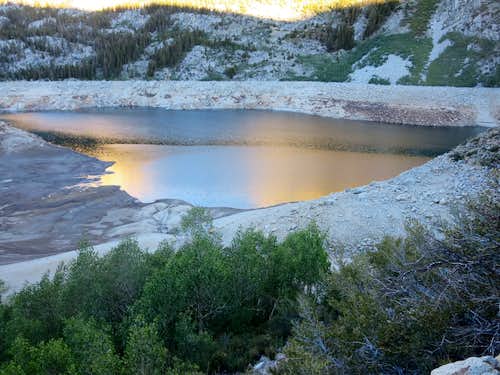 The broad, sandy trail climbed alongside of South Lake for one-third of a mile before ascending into a forest, gaining elevation from the beginning. 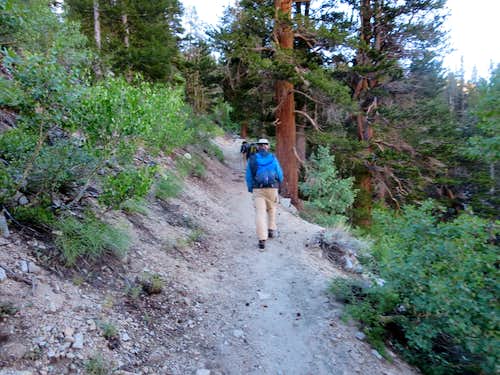 We hit the Chocolate Peak trail cut-off at about two miles, having climbed about 900 feet since the trailhead (from 9800 feet at the parking lot to 10,700 feet at the junction). The Bishop Pass Trail leveled off for the next 1.75 miles, only gaining about 300 feet as we passed up the east side of Long Lake, the first of a series of lakes and tarns that the trail skirts on its way to the pass. The trail offered great views of Hurd Peak, first of its north face and then of its longer east face from across Long Lake. 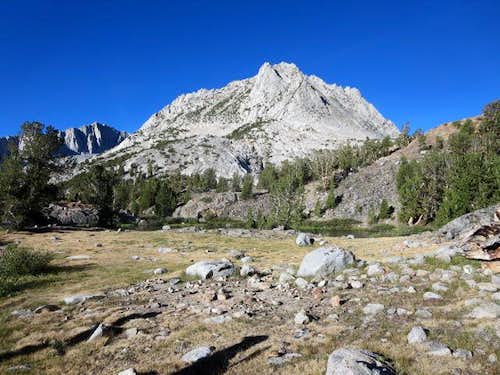 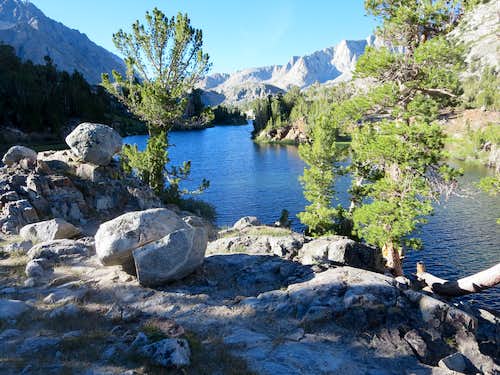 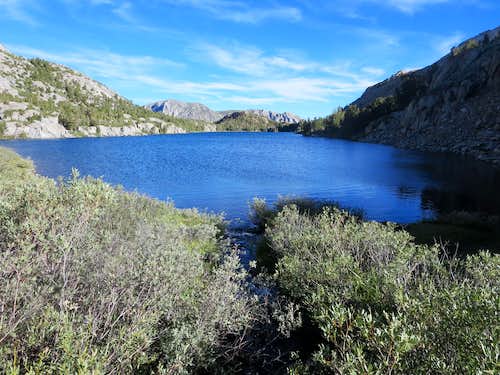 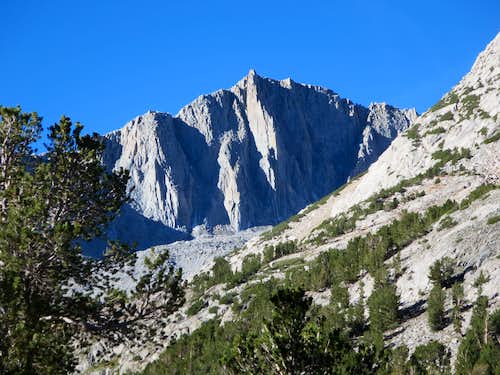 At about three miles from the trailhead – roughly the midpoint to Bishop Pass – the trail left Long Lake behind. Shortly thereafter, it passed along the east side of Spearhead Lake, another pretty body of water in the rising morning sun. The trail now offered views of Hurd Peak’s southeast face as well as some views of the mountains lying ahead, including Mt. Agassiz on the east flank of Bishop Pass and Mt Goode lying to the northwest of the pass. We had briefly considered Goode as an alternative to Agassiz, but Agassiz was taller and offered views of the Palisades that we figured Goode would not match. 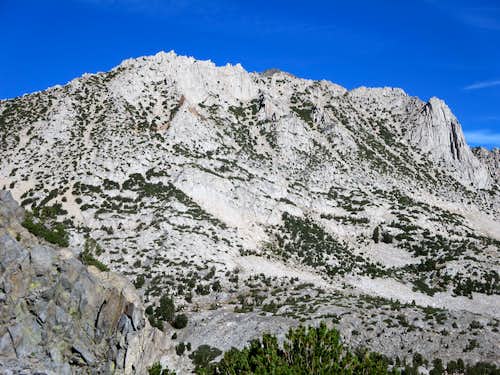 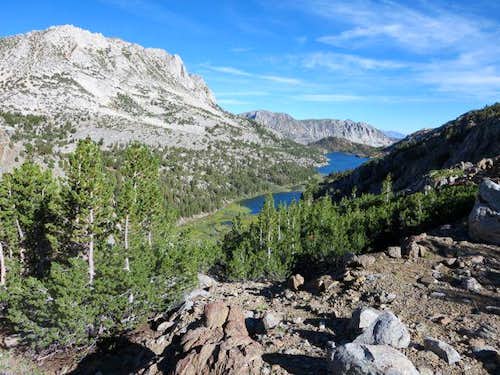 
As we moved further up the trail, we passed other lakes and tarns – the Timberline Tarns, Saddlerock Lake and Bishop Lake, plus some smaller unnamed tarns. 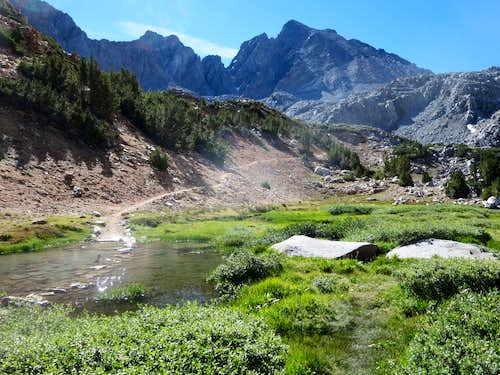 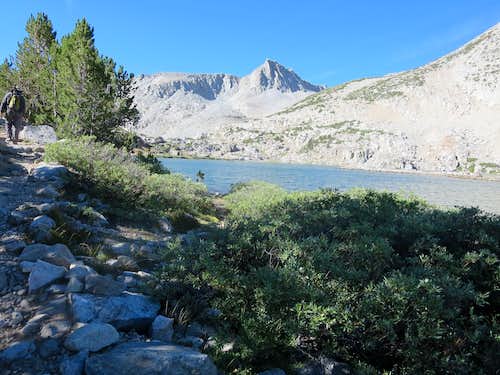 The trail climbed almost 1000 feet over the last 2.25 miles from Saddlerock Lake to the pass. Just before reaching the pass, we had a nice view back toward South Lake, overlooking several turquoise and blue lakes. At the pass, we met a couple of parties coming out of the Sierra backcountry. 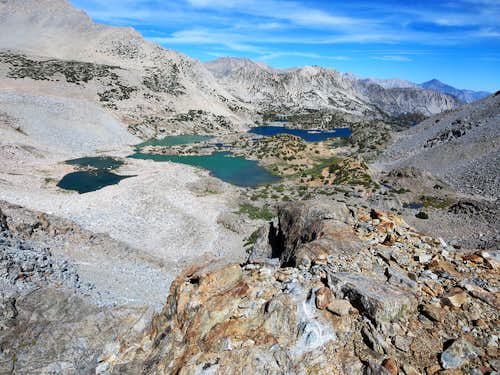 Looking back at lakes from near Bishop Pass 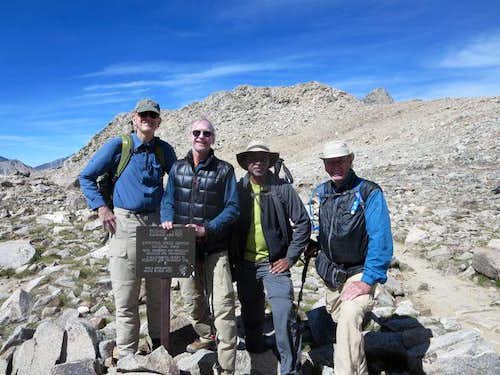 Our group at Bishop Pass

After water, snacks and pictures at the pass, Ruvicha and Brian decided to call it a day and head back to South Lake. Smart decision, as it made for a reasonable day for them. Steve and I decided to cross the plateau to the base of Agassiz, which entailed lots of boulder-hopping, in order to see what kind of terrain climbing Agassiz would entail: scree, talus or more solid rock. 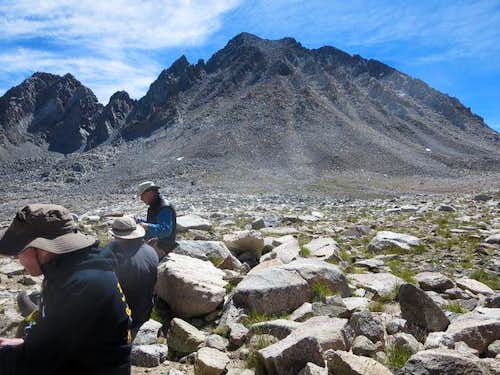 We planned to follow a route suggested by one of Kathy Wing’s photos, which we had purchased from Smug Mug. The route proceeded up a couloir that began just above a small, lingering snow patch. The couloir climbed up and to the right, with a vee about two-thirds of the way to the chute’s top. We planned to move up the right section of the vee. 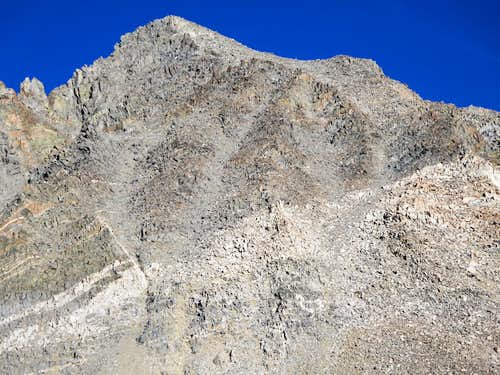 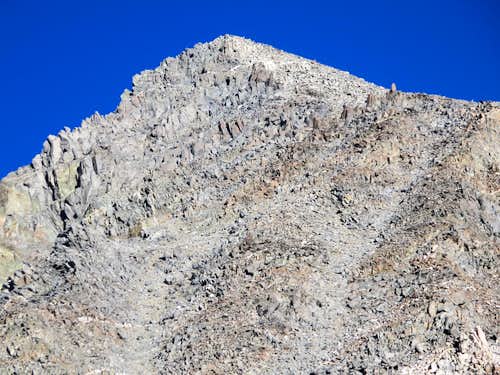 The couloir tops out at the upper right, then turn left to the summit

We found lots of good, solid rock for much of the ascent, though the going was slow for our not-yet acclimatized lungs at 12,000 feet-plus elevation. There were occasional patches of scree or talus, but it was relatively easy to keep on solid rock most of the time. The climbing was Class 2, easy Class 3 at the most, though we found sturdy gloves to be helpful on the ascent. We came across a number of rock cairns, which reassured us we were heading up the correct couloir. 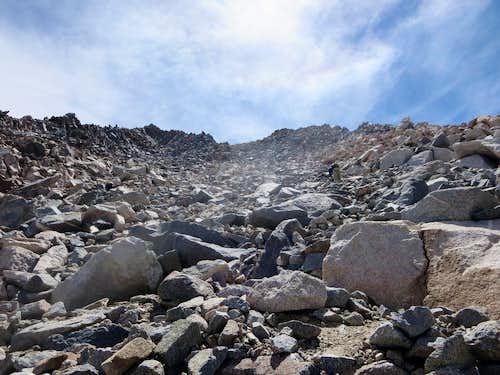 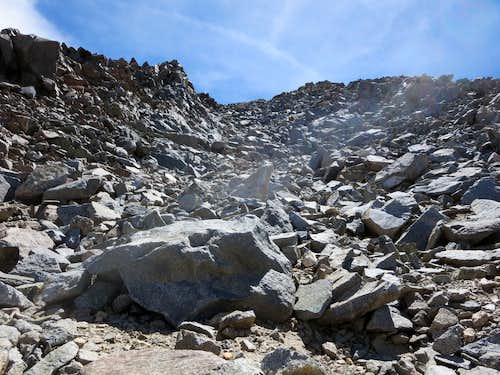 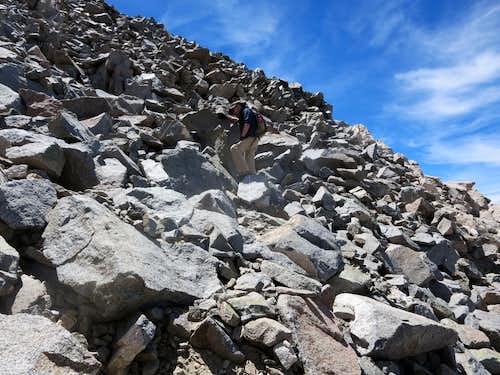 On reaching the couloir’s top, we turned left (toward the northeast) and immediately had a clear view of Agassiz’s summit. As in the couloir, we found lots of large, solid rock on the last stretch to the top. 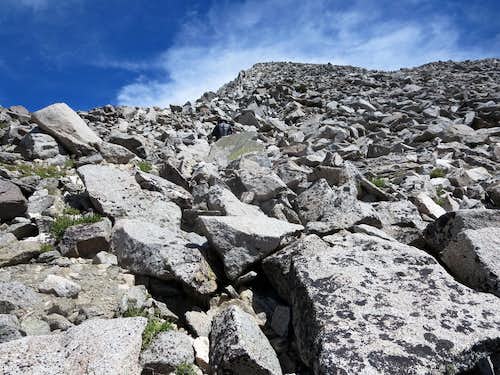 Out of the couloir and heading to the summit

On Top of Agassiz

As promised, the summit of Agassiz offered spectacular views, in particular of the Palisades, to the southeast of Agassiz, and the basin below the Palisades. To the southwest, we had a nice view of the Dusy Basin and the mountains further to the west. To the northwest, we could see much of the valley that we had climbed through on the Bishop Pass Trail. We also had a nice view of Cloudripper to the north of Agassiz. 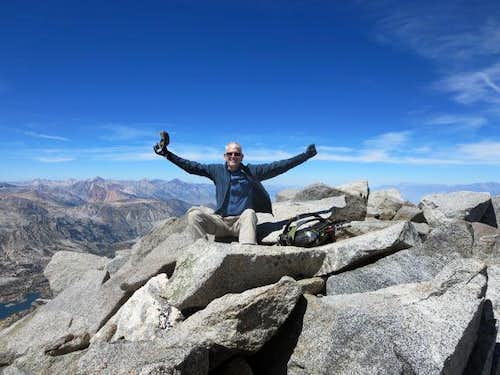 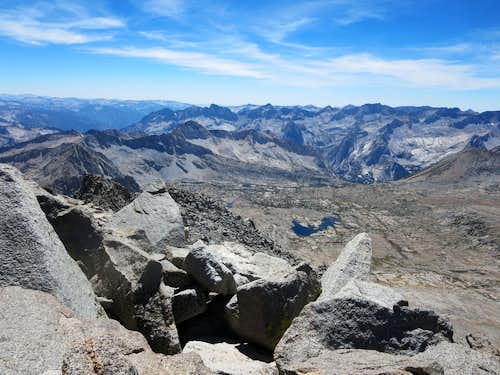 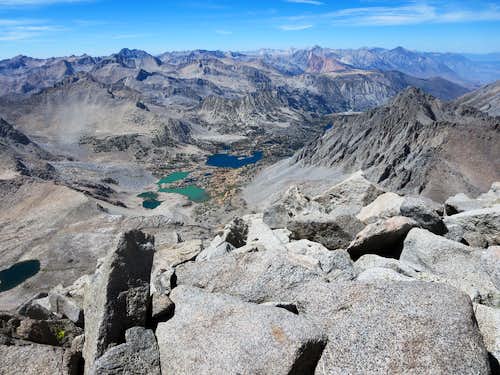 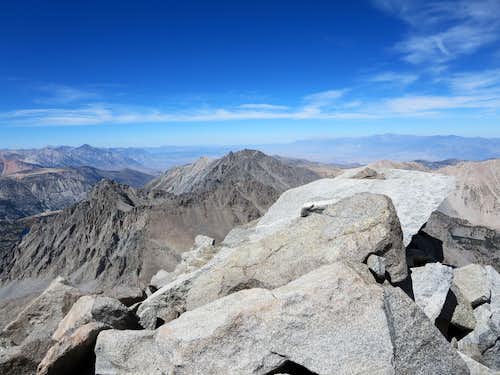 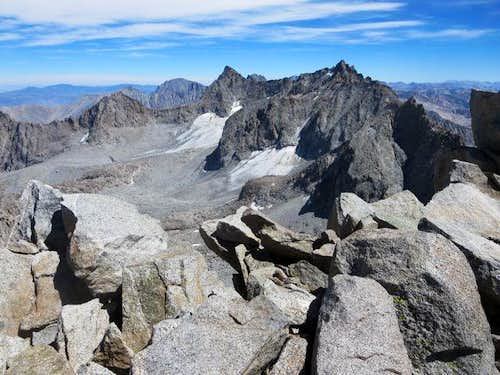 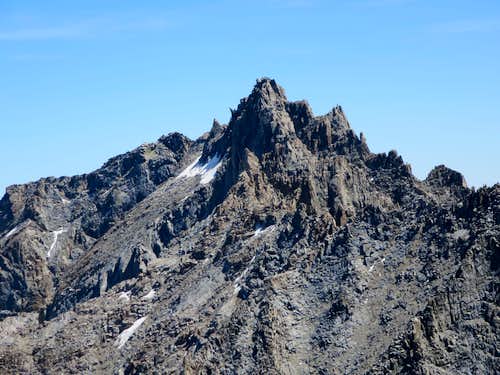 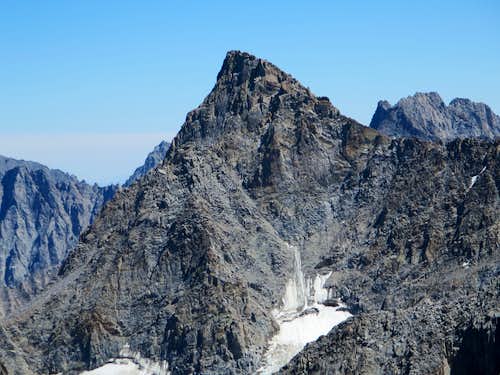 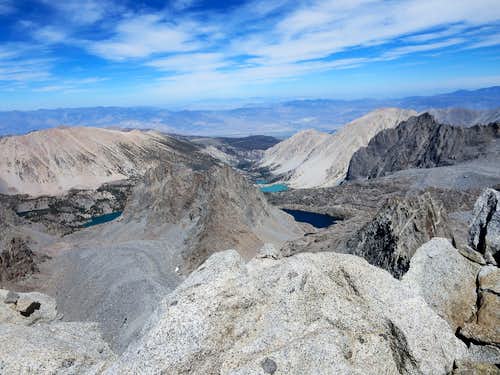 After a short time on the summit, Steve and I began our descent back down the way we came. We had less success finding large rock going down than when we had come up, so we spent more time navigating patches of loose scree and not always stable talus, which required care not to trigger small rockslides. As a result, descending took longer than either of us had anticipated. 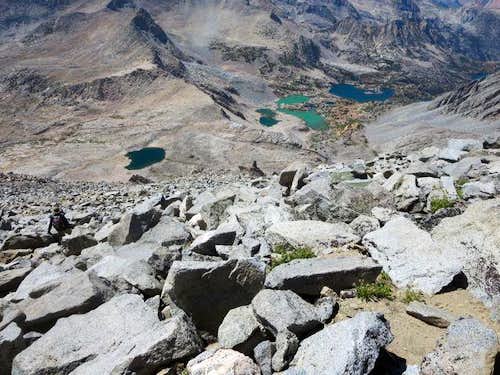 Once we regained the Bishop Pass Trail, we had very good views of Agassiz in the fading early evening light as we took off for the trailhead. 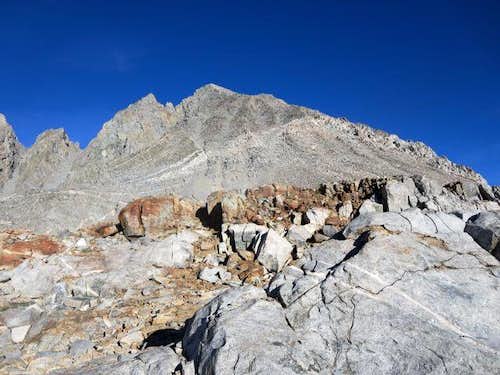 The climb up (and down) Agassiz sapped a lot of energy, and our pace back down the trail to South Lake was slower than we would have liked. Fortunately, we had brought headlamps, as we completed the last couple of hours in the dark. Ruvicha and Brian, who had returned to the trailhead hours earlier, proved real gems. They were waiting for us as we trudged into the South Lake parking lot with cold drinks and cold but still very tasty hamburgers from the Bishop Creek Lodge.

Whether to the top of Agassiz or just to Bishop Pass, we found this one of the prettier hikes that we have done in the eastern Sierra. The mountain and lake views are on par with those in Little Lakes Valley or the hike to Mt. Lamarck (and Lamarck Col). We hiked and climbed slow, making for one very long day. Most should find Agassiz a manageable day hike (but get an early start). The stunning views make it well worth the effort.