Standing in splendid isolation above the green fields and dairy farms of the Taranaki peninsula in the west of New Zealand’s North Island, is the almost perfectly symmetrical volcanic cone of Mt Egmont/Taranaki.

The well travelled Captain James Cooke originally named the mountain in 1769 after John Perceval, 2nd Earl of Egmont, sponsor and financier of his first voyage. However, following the vesting of the mountain in the Taranaki Maori Trust Board in 1978 (and its immediate return to the nation as a gift) it was considered inappropriate to have it named solely after a British nobleman who had never set foot in New Zealand. The name Taranaki was therefore conferred upon the mountain and, together with Egmont, given equal status in law. 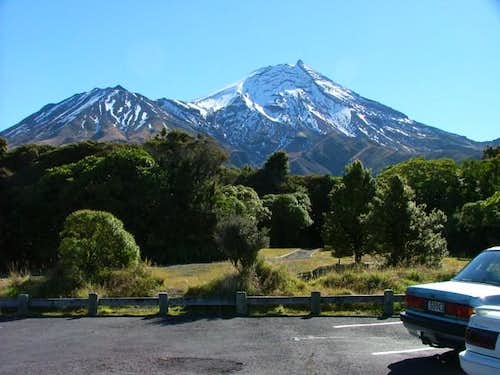 According to Māori mythology, Taranaki was once to be found in the centre of the North Island. In a great battle for the beautiful Pihanga, Tongariro defeated Taranaki, inflicting great wounds on his side and causing him to flee to the west where he still stands, magnificent but alone. On a clear day, Taranaki can still see Pihanga, her successful suitor and all the other volcanoes of Tongariro National Park, 130 km to the east.

Like many of the world’s mountains that stand in splendid but highly visible isolation, Hood, Rainier and Fuji for example, Taranaki issues a challenge that some who are tempted to climb it might be wiser to ignore. In summer, a climb to the summit requires a day, a good level of fitness and little else. However, the mountain sits close to the Tasman Sea and is subject to rapid and violent weather changes. Many who attempt the climb are less than adequately equipped. A combination of these factors has meant that Egmont has seen more climbing fatalities than any other mountain in New Zealand. The comparison with Hood in this regard is particularly striking. 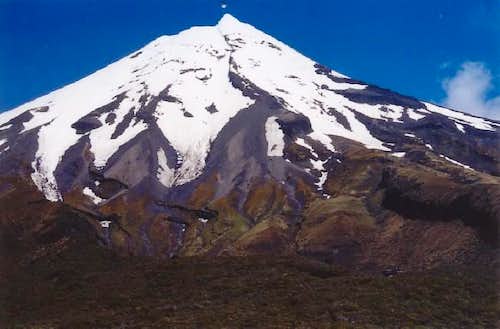 Mt Taranaki is a stratovolcano and is classified as active but quiescent. The last known volcanic activity was the production of a lava dome in the crater in the 1850’s. The last major eruption is believed to have taken place before the arrival of European settlers around 1655.

Mt Egmont/Taranaki is the centre piece of Egmont National Park and is administered by the New Zealand Department of Conservation (DoC).

Three paved roads lead to the northeast, southeast and east sides of the mountain all of which offer access to summit routes.

Egmont National Park is encircled by State Highways 3 and 45 making access to any of the normal routes up the mountain a simple process.

Approach the area from Wellington and Wanganui to the south on State Highways 1 and 3 to Hawera. Or from Auckland and Hamilton to the north on SH 3 to New Plymouth. Or from Taupo and Taumarunui to the east on SH 43 to Stratford.

From Hawera at the junction of SH 45 and 3 drive 19 km north on Route 3 to Eltham. In the centre of the village turn left onto Eltham Road and drive 13 km west to Kaponga. Turn right on Manaia Road and drive 14 km north to the Dawsons Falls Roadend and Visitors Centre from where the South Route starts. 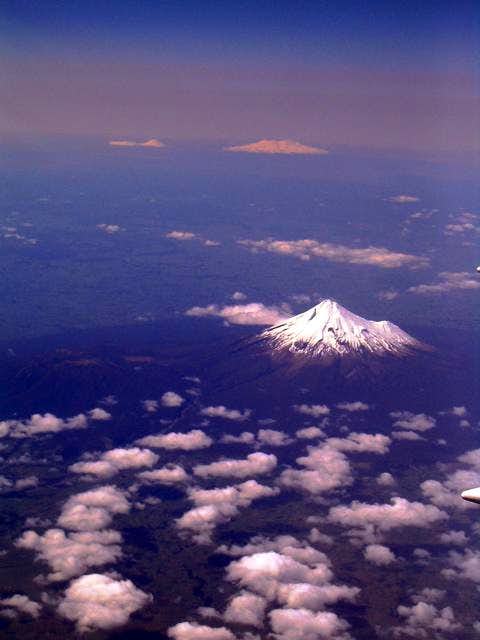 Continue north on SH 3 beyond Eltham for 11 km to Stratford and turn left onto Pembroke Road at the sign for East Egmont/The Plateau. Drive 18 km west to the top car park at the end of the road and the Eastern Plateau. From here access The Manganui Ski Area and beyond, the east slopes route to the summit of Taranaki.

Returning to Stratford, continue north on SH 3 for 23 km to Inglewood and then a further 5.5 km to Egmont Village. Egmont Road is well signed in the village. Turn left and follow the road south for 16 km to the North Egmont Visitor Centre from where the North Route starts.

New Plymouth is a further 13 km north on SH 3 beyond Egmont Village. Simply reverse the above directions to approach any of the routes if coming from this direction.

Around The Mountain and Other Tramps

DoC has developed a number of low to intermediate elevation walking tracks from both the Dawson Falls and North Egmont Visitor Centres. Some of these can be combined to make loop hikes of up to a day in duration and are very useful options when weather is a factor at higher altitudes. The following maps are taken from DoC’s website and used with the general permission that DoC affords other publishers. For further details click on the Dawson Falls and North Egmont DoC links at the end of this page.

In addition and often in combination with the foregoing, a walking track with serviced huts along the way has been long been in place for those who wish to make a complete circumnavigation of the peak without getting onto its high reaches.

The route is generally regarded as starting at the North Egmont trailhead and, from there, can be walked in either direction, ending up at the starting point in about 4-5 days. Many options exist to exit earlier if desired. See the links section at the end of this page.

The circuit passes by all of the principal summit routes along the way and a summit day is often built into the plans of many who walk the circuit.

I know of no formalities that need to be completed prior to climbing Mt Egmont.

DoC operates a well-organised intentions system. Particularly if you’re travelling alone, you’d be well advised to complete one of their forms if available at the trailheads.

I had good cellular service (Vodaphone) on Mt Taranaki once high enough to have line of sight to any of the surrounding towns.

New Zealand is notorious for awful mountain weather just a few kilometres from the nearest sunny beach and Mt Egmont/Taranaki is the paradigm of this phenomenon. Clear skies and warm temperatures at the start were replaced by white-out conditions and cold temperatures on both my summer trips to the mountain to date. Check the alpine forecast with DoC before you venture onto this and any other mountain in the country. Carry a map and navigational tools – compass AND GPS – and know how to use them. The correct map for Egmont/Taranaki is NZ Infomap 273-09 and Topographical Map Series NZMS 260

Most will undertake Egmont/Taranaki as a day trip.

Those tramping the Around the Mountain circuit will likely stay in the serviced huts along the way but I believe that DoC allows camping in the vicinity of these huts.

Camping in the summit crater. Photo by radson

Use the Doc huts link to obtain all the information you will need to make arrangements to stay at any DoC’s huts on the mountain or the private lodges at the Dawson Falls and North Egmont trailheads.

There is also plentiful accommodation in nearby towns. As well as the foregoing use the following links.