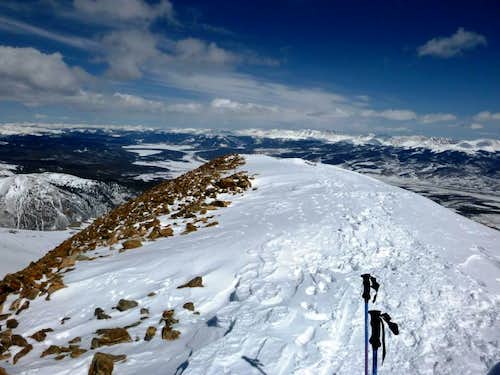 This was my first winter ascent of a Colorado fourteener and it was an awesome trip. I had been eyeing Mt Elbert for quite some time as it is on the list of the State Highpoints. I have been collecting highpoints as a hobby since high school and ever since I moved to Colorado I have wanted to add the Colorado high point to my list. Well, three years later and it was time to move out of Colorado and I still hadn't made the time to climb it. I planned out the trip up the east ridge using the South Mt Elbert trail and since it was winter we would need to use the trailhead at the bottom of the summer 4wd road. I convinced a friend of mine to climb with me and thankfully he came along. I downloaded the .gpx files from 14ers.com and used my Garmin Foretrex 410 to navigate though most of the trail was pretty well defined.

We left Colorado Springs at about 5:00 and left the trailhead at 7:45. The dashboard was reading 15 degrees when we stepped off so the snow was still packed well at from the trailhead all the way up the 4wd road. Despite the temperatures we quickly heated up with hiking and dropped layers within the first 30 mins and climbed in long sleeve t-shirts and one other layer for the rest of the climb.

We continued over the small footbridge and uphill from there, the trail was pretty steep and slick but I put on my microspikes and had enough traction to make it up without too much trouble. There had been quite a few people on the trail to pack down the snow so we didn't need snowshoes for a good portion of the climb. The scenery was great as we plodded through the aspen grove and continued to climb.

We continued over the small footbridge and uphill from there, the trail was pretty steep and slick but I put on my microspikes and had enough traction to make it up without too much trouble. There had been quite a few people on the trail to pack down the snow so we didn't need snowshoes for a good portion of the climb. The scenery was great as we plodded through the aspen grove and continued to climb. Eventually as we neared treeline the trees changed from aspens to pines and the snow got deeper. I began to posthole quite a bit (up to my waist at one point) and we finally decided to put on the snowshoes which we wore for a while longer. It was right about this time we passed a group of 5 from Texas who had traveled up for the weekend to climb Elbert. They said they had stashed their snowshoes at the 4wd trailhead and were regretting it. We continued on and didn't see them after that, they didn't summit that day, I hope they get a chance to get up there before they have to get back to Texas.﻿﻿

We continued on snowshoes for a while longer and eventually made it to a small rocky outcropping at 12,300' where we stopped to have an early lunch. We were in no rush to the top so we took our time and after about 30 mins kept heading up.

The snow was pretty stiff and windblown so we strapped the snowshoes back to our packs and kept climbing in the microspikes. This served us well to the summit, the remainder of the climb alternated from stiff windblown snow to bare rock and we actually followed the summer trail which was still visible in sections to within about 1,000' of the summit. At this point the well defined trail we were following from other climbers had branched out into many different approaches so we generally just kept heading "up" with minor course corrections looking at the waypoints on my Foretrex.

We actually spotted several groups of ptarmigans by nearly stepping on them, their camouflage is pretty impressive and their coos were an interesting way to break up the monotony of the climb up for a while.

The last few hundred feet of elevation consisted of a thick snow cap and several false summits, by now the altitude had really started to catch up to me and it seemed like I needed to take a break every few steps. As we were nearing the summit two other groups passed us on their way down but they were taking a slightly different track so we didn't talk much more than a few waves. Finally we were in view of the summit and took the last few steps to the highest peak in Colorado. We summited at 1:45 which gave us about 6 hours of climb time to the top. The views were spectacular and the feeling of completing this highpoint was incredible. We stayed at the top long enough to snap a few pictures but clouds were starting to build so we didn't want to stay too long.

﻿The descent was quick with nothing really to report except that the temperatures were starting to warm and thus the snow starting to melt. At about 12,300 feet we stopped at the same spot we had lunch at on the way up and donned our snowshoes and needed them for the rest of the climb down. As we got into treeline the snow really got soft and I was once again thankful for the snowshoes, the steeper sections were very slick and we took a few slips and falls but overall no major problems for the descent. We made it back to the car just after 4:00 pm just in time to see the clouds really billowing over the summits. The total trip took us 8 hours and 15 minutes with a distance of 11.4 miles and 5,409' of elevation gain.

Below is a link to my full trip report with pictures on my blog. There you can ask any questions you have.