Mt Elma is a mostly forested mountain overlooking Croteau and Lady Lakes to the east and Lake Helen McKenzie to the north and is found in the eastern - ”Forbidden Plateau” - sector of Strathcona Provincial Park, Vancouver Island.

Elma is one of the closest of the Plateau mountains to BC Parks’ Paradise Meadows trailhead and is a familiar sight to the thousands of skiers who visit Mt Washington Alpine Resort every year. Ask them about it, however, and they probably couldn’t even tell you its name.

Unheralded and mostly overlooked Elma receives few visitors and those that do come usually visit in winter on skis or snowshoes when the bush and deadfall is covered and the going less obstructed. There’s nothing in the way of a trail and even less in terms of route details. In summer this is strictly an unmarked bushwhack.

The summit of Elma is a flat open plateau about 500 metres x 200 metres that just about pokes its nose into the high alpine zone. Views – at least in summer – are limited and there is no well defined high point or cairn that I could find. Honestly said, a visit to Elma is really just about ticking it off.

Mt Elma is named for the wife of Theed Pearse, alderman and then mayor of Courtenay for many years in the 1920’s and 1930’s. Following retirement in 1941, Pearse devoted himself to an extensive ornithological study of the area and became its foremost expert. Elma died in 1969 and Theed in 1971 just 5 months short of his 100th birthday. 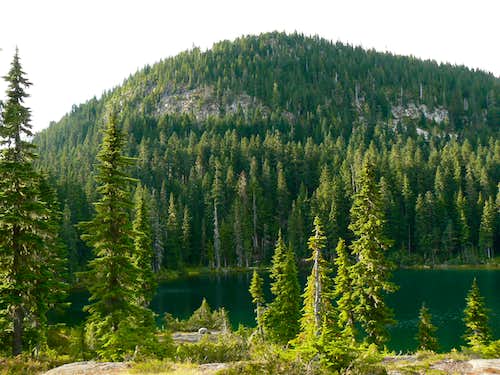 Parks have established a new trailhead and information booth right beside the lodge. If you get back from your trip before 5.30 pm, the Raven Lodge has a lovely view over to the mountains and is a great place for an end of hike libation.

Head out from the Paradise Meadows trailhead across the groomed trail and boardwalk onto Paradise Meadows. Reference to this map illustrates the route to Lake Helen Mackenzie. Easy trail takes you to the north shore of the lake in about 45 minutes. Go right at the trail junction and proceed on rather less well maintained trail around the west side of the lake and up the pass between Mt Brooks to the west and Elma to the east.
Just before reaching the high point of the pass, at N49 42.530 W125 19.956 look for an open draw angling off on the left. Leave the main trail here and walk SE up the draw for about 150 metres. If you can find it, there is an old blaze on a tree at this point. Turn left here and head east up through the trees keeping to open spots wherever you find them. It’s about 500 metres of map distance to the summit area above – about 30 minutes. The going is reasonably open at first, deteriorates into a good B3 huckleberry bush bash higher up and finally breaks out onto heather slopes just below the summit plateau.

Alternatively, if you’re travelling from the direction of Hairtrigger Lake, turn right (east) at N49 42.466 W125 20.005 just below the south side of the pass and walk 150 metres across a knoll to join the route above at the top of the open draw.

As mentioned above, views are limited. Walk to the north end of the plateau to see the ski runs on Mt Washington. However, you have to descend a fair way down to the north and south to see Lakes Helen McKenzie and Croteau respectively.
I’m told there is a route from the summit that finds a way down through the cliffs to Croteau Lake. I was not able to find it, however, and this will have to await another visit.

As always a MapSource/Garmin tracklog is available for the asking for the approach and summit routes. Just send me an email or PM.

If, for some reason, you decide to camp on this trip there is a $5/person/day fee for any of the sites in the so-called core-areas of Strathcona Park. There is a self-registration box and payment slot at every core designated trailhead. Payment can be by cash or cheque. Fill in the payment form before you leave and take the receipt slip with you.

With Mt Washington just 3 kms away, there is cellular coverage just about anywhere on Mt Elma from which you can see the ski runs.

In core-areas of Strathcona you must camp in designated areas only and the nearest approved campsite for Mt Elma is at the east end of the north shore of Lake Helen McKenzie or, perhaps, at Kwai Lake.

Note that fires are strictly prohibited, so you must pack a stove. Bear and cougar frequent the mountains and forests of Vancouver Island, so proper back country methods – isolating food bags, cleaning up all cooking scraps, good toilet practice etc – are essential. All of Parks’ designated core area campsites are now equipped with metal box food caches. Giardia is well documented throughout Strathcona Park, so boil or treat all water.