A Hike to Ms. Islip from the Crystal Lake Trailhead

On January 2, 2016, I kicked off the new year by hiking to the summit of Mt. Islip in the San Gabriel Mountains.  This area is normally covered with snow this time of year, but despite all of the snow falling in the Sierra this late fall and early winter, Southern California has only see a few light storms, and the view from my office downtown indicated that the trip was likely to be snow free.  And so it proved -- mostly.  There was a little snow on the North-facing slopes, but no more than a couple of inches, and not enough to prevent safe normal hiking without snow gear such as an ice ax or crampons.  I hiked to the top via the Crystal Lake trailhead, and descended (following the advice of a kind man I encountered on the way up) via the Islip Ridge trail and Big Cienaga trails.  The entire route is about 7.5 miles with about 2,200 feet of elevation gain.  It took me about 4.5 hours, though I expect most of you SP'ers could do it in 2-3.
The hike was beautiful, with gorgeous views for nearly the entire trip.  At the summit there are great views of nearly the entire San Gabriel Range except for the Mt. Baldy area and Cucamonga wilderness.  There was a peak of Mt. Baldy at the very top showing some snow cover on the North Slopes, but otherwise that portion of the San Gabriels could not be seen.  But the views of the rest of the range more than made up for it.  This hike was a great one to start off the new year, and will hopefully get my started on some longer more difficult summit hikes the rest of the year.

Early Portions of the Hike to Windy Gap

The hike begins at the Crystal Lake Campground, just off of State Highway 39, about 25 miles from Azusa, California, at about 5,800 feet.  The area is remarkably well-signed for a Southern California trail -- many of which lake any signs at all.  The entire way to the top is signed, with even some mileage post markers along the way. 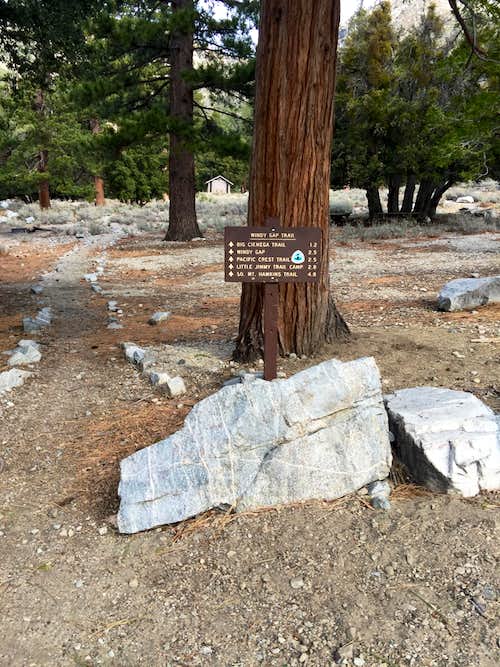 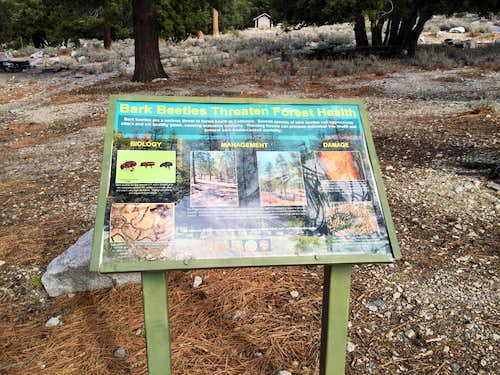 While the majority of the trail has great views, the beginning portion did not.  It climbed moderately through a forest of manzanita and occasional Jeffrey Pines and oak trees -- typical terrain for about 6,000 feet in Southern California.  Amusingly for me, the area was also peppered with occasional yucca trees and other desert plants.  Southern California is unique and itneresting for having verdant forests juxtaposed to chaparral and desert vegation, all scrambled together like a cook who can't quite decide what ingredients to use.  I enjoy hikes through areas such as this, but it did mean the views had not yet opened up. 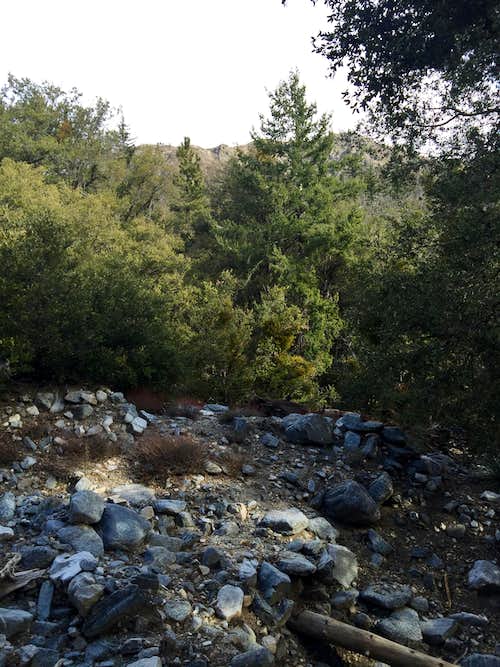 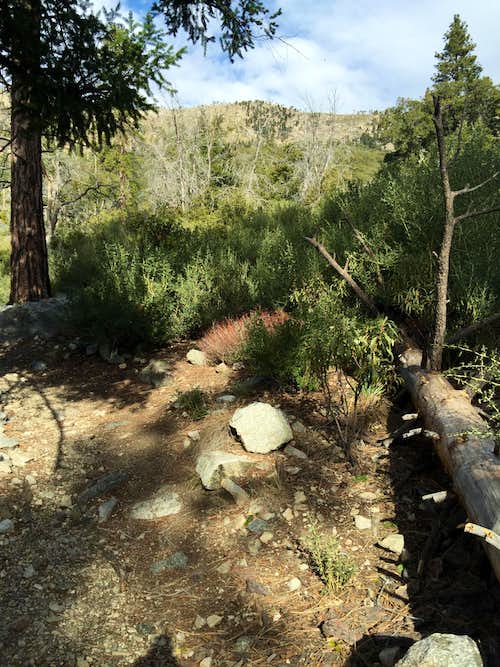 Per John W. Robinson's Trails of the Angeles (Wilderness Press, 9th Ed. 2013), the area was ravaged by the Curve Fire in 2002.  The early portion of the hike did not show signs of the fire, but after a mile or so the hike does enter the area victimized by the fire.  But it wasn't so bad.  True, there were lots of tall burnt trees, but the vegetation underneath looked perfectly healthy, and there were plenty of young Jeffrey Pines and even cedear trees growing from the former devestation.  There was also plenty of manzanita and other shrubs that had shed their leaves for the winter.  It also meant that views opened up in nearly all directions.  To the South, I could see Monrovia Peak, which looms over the San Gabriel Valley from Arcadia-Azusa like a much taller mountain.  To the far left I could see the telescopes of Mt. Wilson and the antenna of Mt. Wilson and Mt. Harvard.  Ahead of me loomed a high ridge, but it was not Mt. Islip or even Mt. Hawkins.  I believe most of this ridge lacks a name as it extends east from Windy Gap. 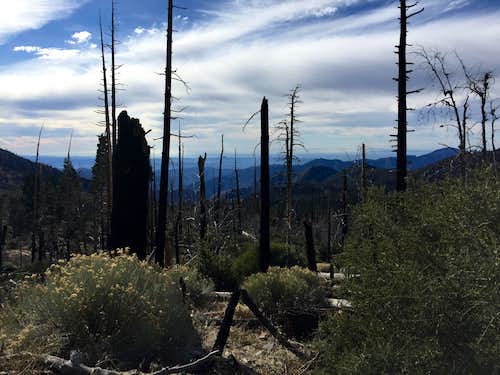 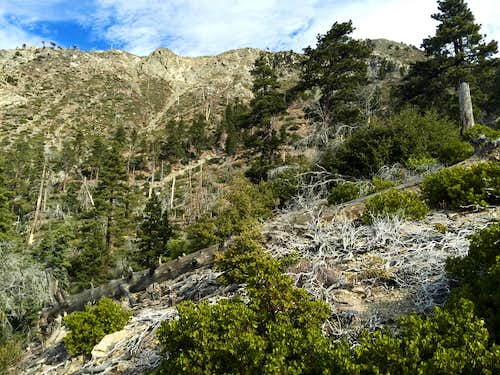 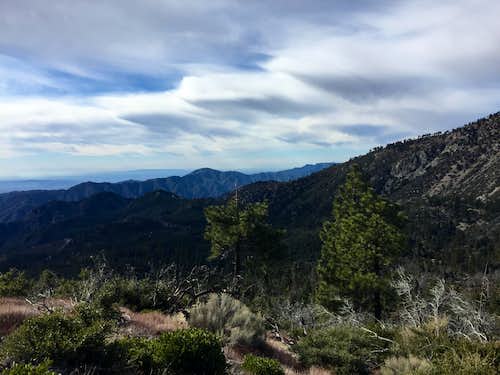 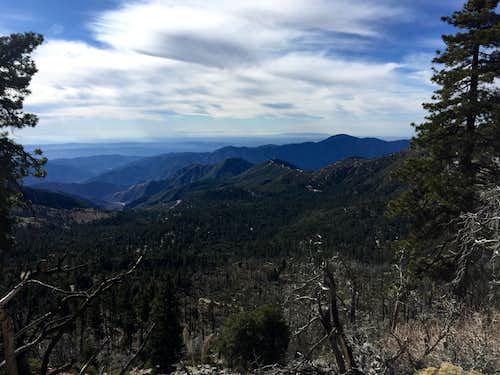 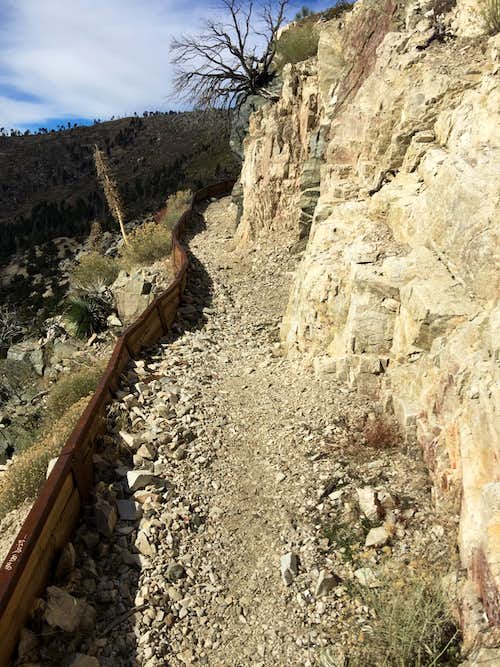 Along the way, I encountered a gentleman I'm guessing was around 55 who asked me if I was headed to Mt. Islip.  When I responded in the affirmative, he told me that there was some snow and ice on the other side of Windy Gap, though nothing unmanageable.  "It's doable" he told me.  he suggested I "continue on" through the Mt. Islip ridge trail rather than returning back down to Windy Gap.  he also told me I had chosen to come up the "right direction' from Cystal Lake rathern than Islip Saddle from the Angeles Crest highway.  (The truth is I chose this route because I had hiked San Gabriel summits many times from the Angeles Crest Highway, but never from CA 39 or the Crystal Lake Campground.)  After hearing this, I wondered if the other side of the ridge would turn from the dry, virtually snow-free area through which I had been climbing to a winter wonderland.


The trail continued to climb moderately, but never too steeply, and even a relatively out-of-shape guy like me was able to manage it without too much huffing and puffing.  I couldn't see any summits I could confirm was Mt. Islip. After what the signs claimed was 2.5 miles, I reached Windy Gap -- about 1,700 feet from the start.

I did see a little snow, but nothing remotely resembling a snowy landscape.  Even on the more moist and snow-retaining North Slopes, there was at best only a couple of inches of snow. 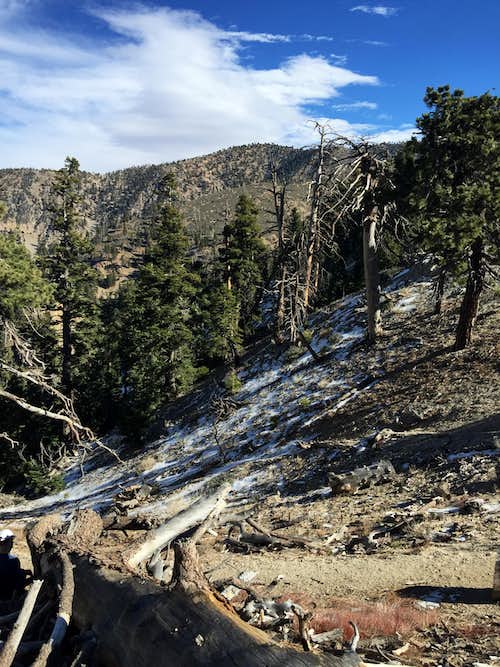 After taking a short break, I resumed the climb to Mt. Islip, eschewing the side trip to Little Jimmy Campground, which I had seen before.  The trail wandered back and forth between the North and South side of the East Ridge to Mt. Islip.  The North sides did have some snowy sections, but nothing that gave me pause.  The South Sides remained virtually snow free, with only occasional patches of snow under resting in the shade under fallen trees.  There was a fair amount of deadfall, and a couple of log crossings were more difficult to manage than the snow. 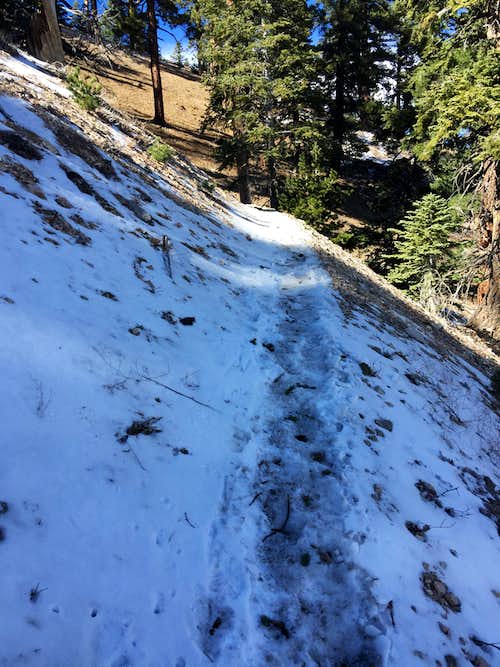 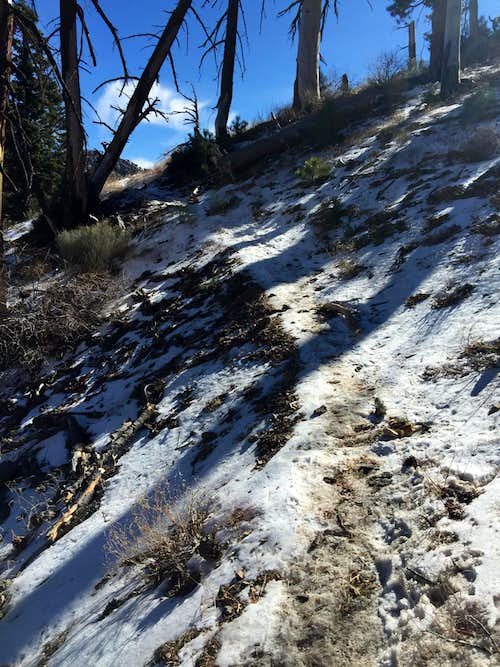 After some moderately steep climbing, the trail to the summit splits off to the right, while the main trail, now termed the "Islip Ridge" trail continued ahead and eventually back down to the Crystal Lake Campground.  I took the trail to the summit, pausing to gawk at the old cabin just below the summit.  John Robinson reports that the mountain's namesake, George Islip, used to live in this little stone hut.  I then rounded the bend and walked up the last 10 feet or so feet to the summit. 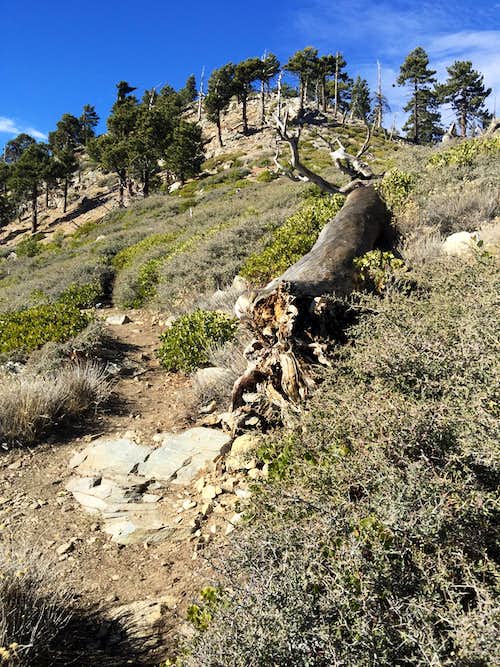 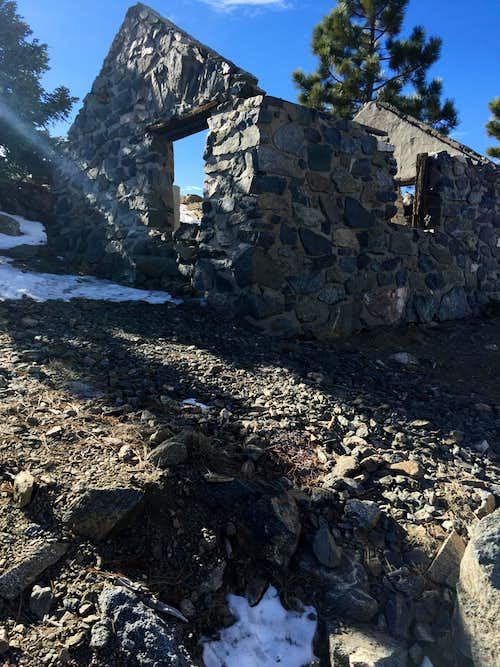 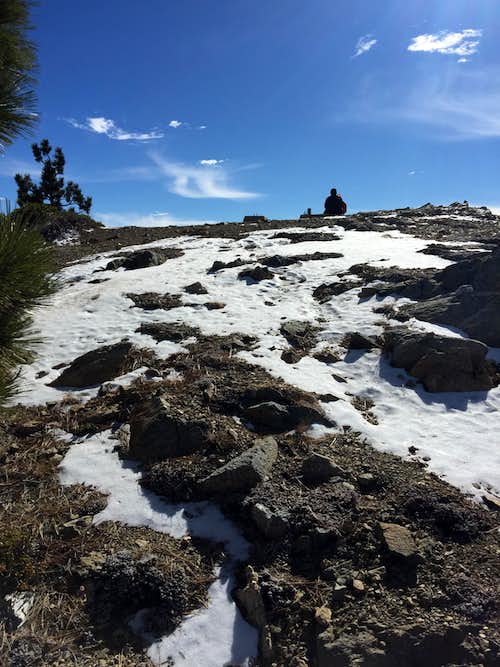 The summit sported a summit register in an ammo box placed by REI with several notebooks in it.  I duly filled out my name (James Golden) on the newest notebook. 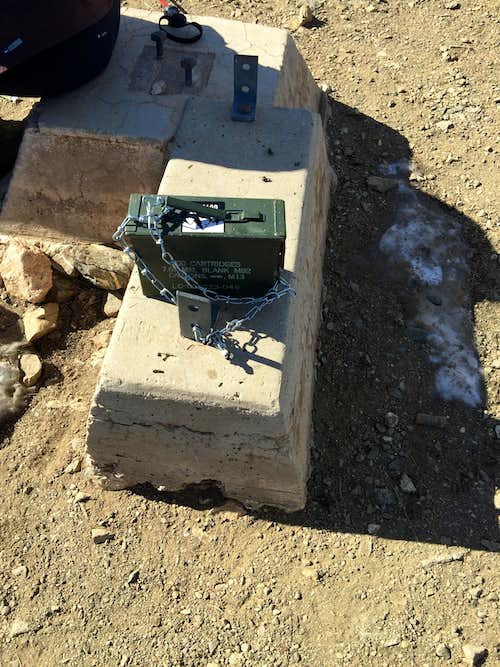 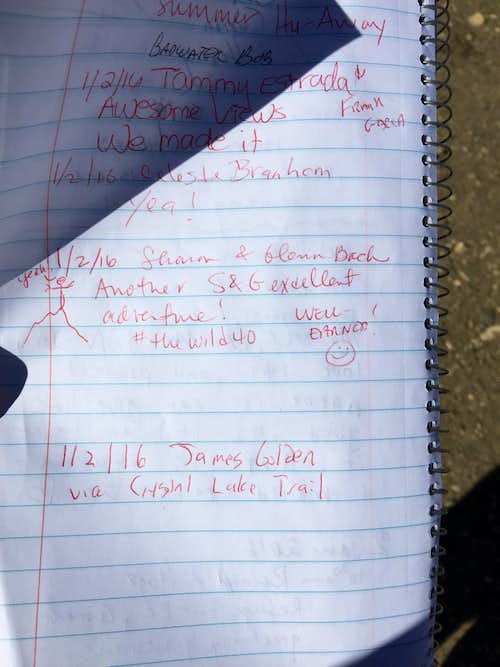 Views From The Summit

Views from the top were sublime. 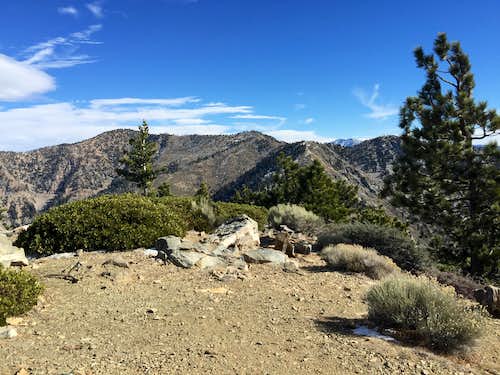 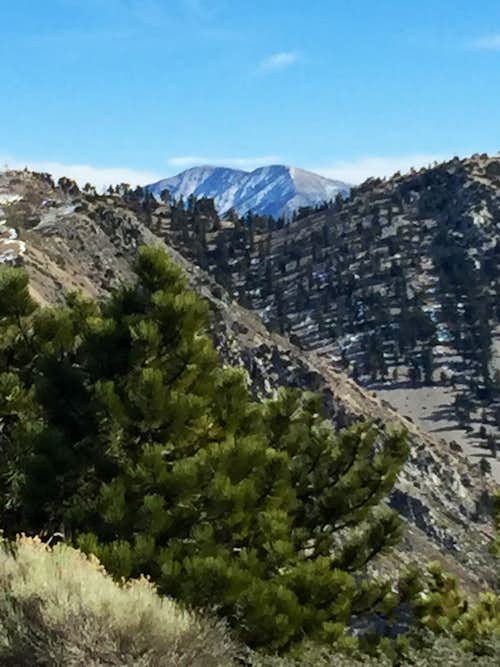 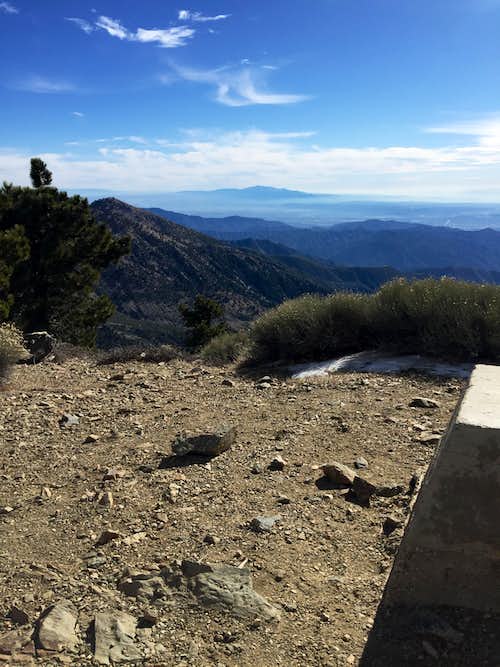 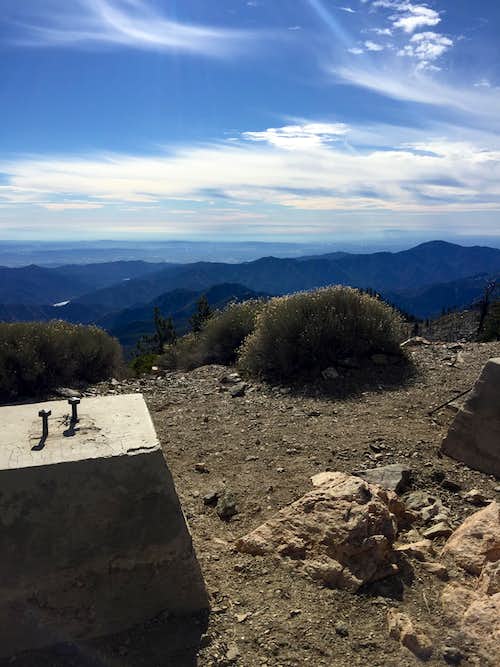 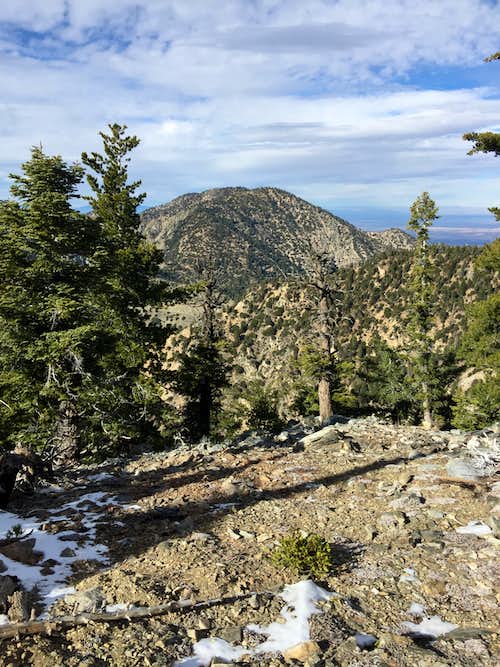 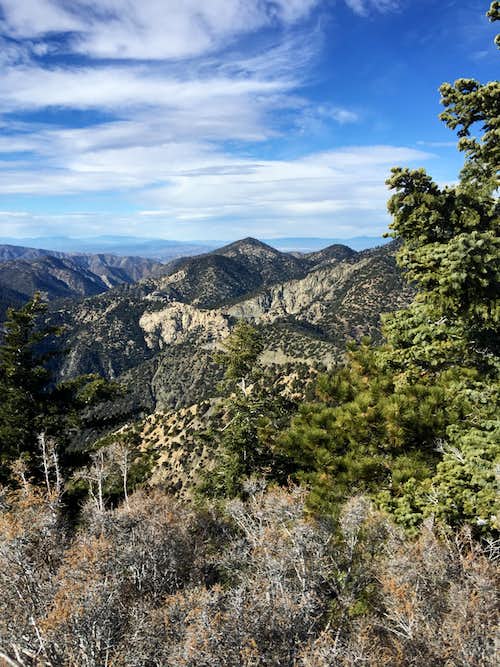 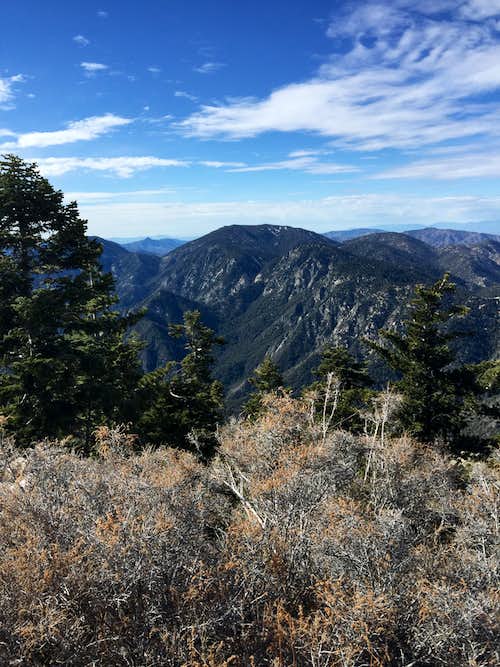 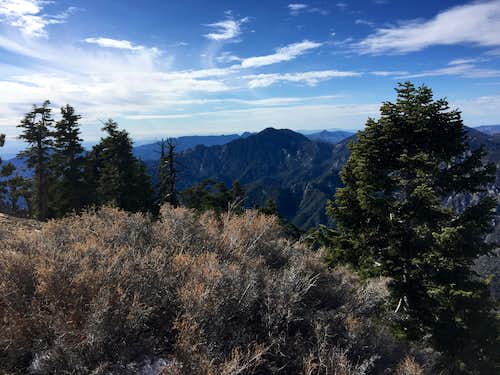 After soaking in the views, I needed to return home.  I hiked down the trail back to the Islip Ridge trail.  I then followed the Islip Ridge trail down to the Big Cienaga trail, which I took back to the trailhead.  The trip down wanders through strands of Jeffrey Pines and Manzanaita, alternating with sections of burned forest.  New trees were growing in the burned areas, hwoever, and I expect in another 15-20 years the area may look as good as "new."  After about an hour to an hour-and-a-half of walking, I made it back to the trailhead. 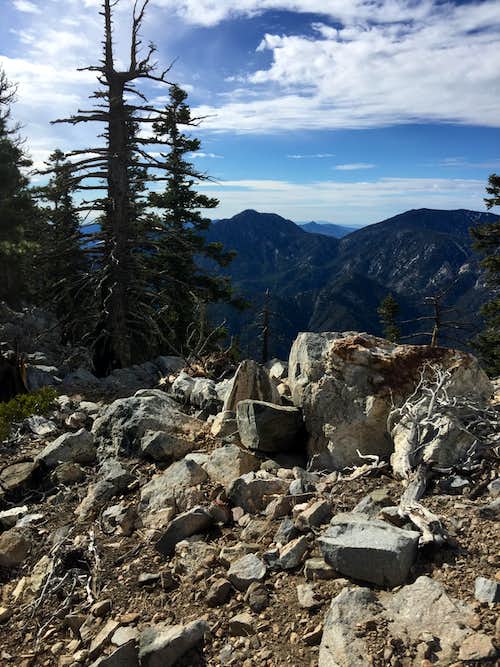 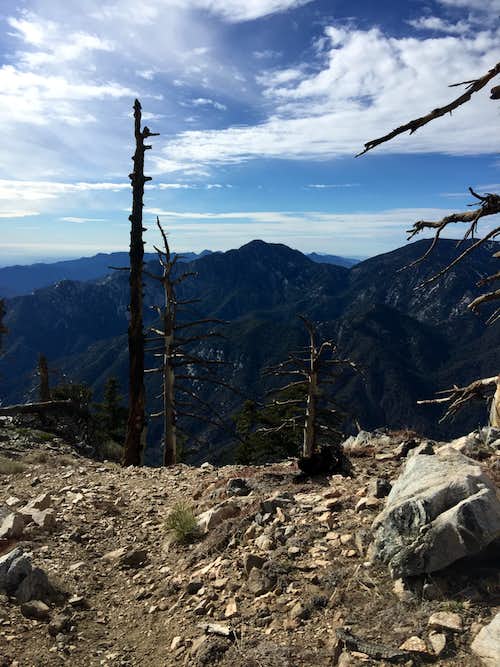 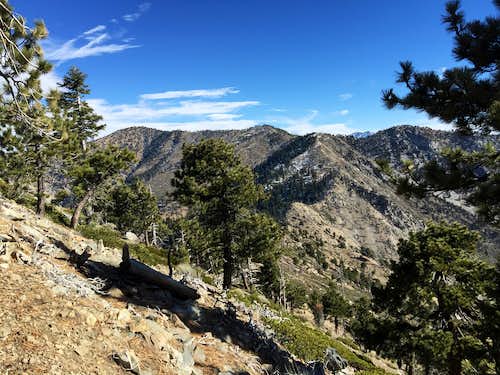