Because our time was limited and acclimatization was a factor, we decided to head up to Horseshoe Meadows on Monday. Our plan was to spend the first night at Cottonwood Lakes Campground, the second night at Long Lake and then summit Mt. Langley. After our adventure on Split Mtn. last year, we were happy to hike on developed trails. After pulling into Lone Pine, we headed up the Horseshoe Meadows road, which is an adventure all by itself. 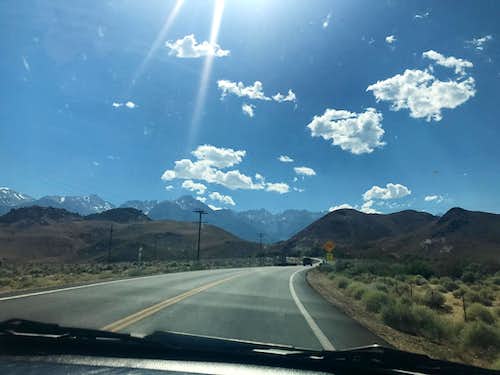 Driving up the Portal Road 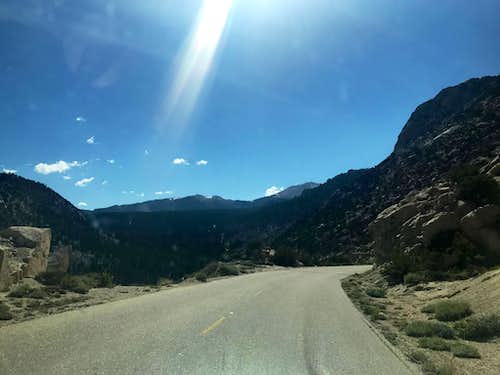 
After driving up the Horseshoe Meadows Road, we rolled into the Cottonwood Lakes Campground, and met up with our friends (Will, Miles, and Julian). There was only about 3 other people camping up there, which surprised me, knowing the popularity of the area. We set up camp, and then Jacob, Miles, and I hiked down to Cottonwood Pass Campground and Horseshoe Meadows. The Meadows were enormous, and filled with little streams. It was a beautiful area. 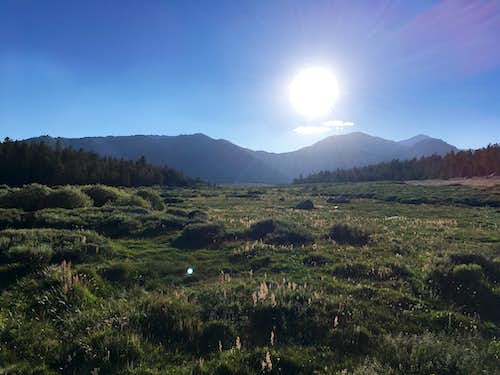 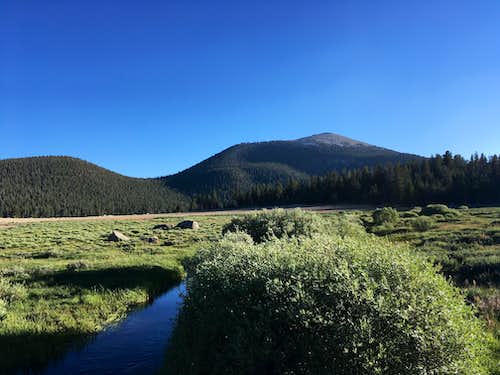 Looking up at Cottonwood Pass


We woke up somewhat early (6 a.m.) and packed up. We headed out north towards the Cottonwood Lakes Basin mid morning. This trail was flat and beautiful, and not very crowded. I expected this area to be very crowded but we didn't meet upwards of 10 people the whole day. 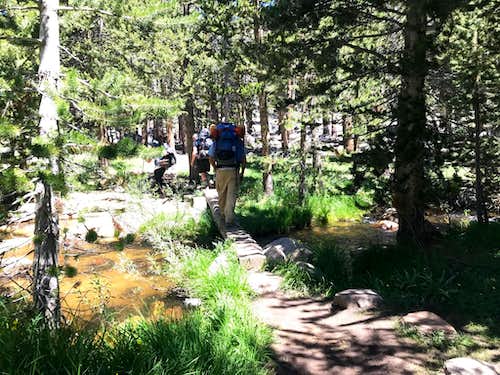 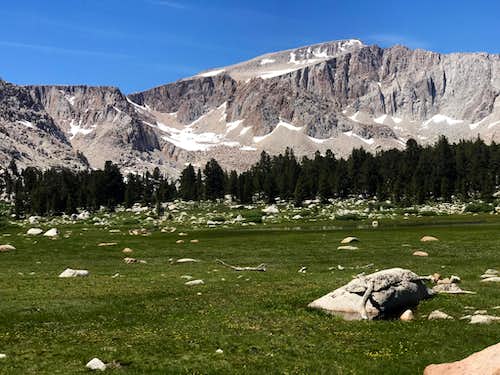 I just have to say, the Cottonwood Lakes are in the top 3 areas I have ever been to in the Sierras. The meadows are awesome, and the views are extraordinary.


After hiking through boulder fields that exist between the Cottonwood Lakes and Long Lake, we pulled into High Camp. There was snow up high, and so decided not to continue on to the next lake. This campsite was beautiful as well, and the views were worth it. We heard large booms throughout the day, most likely rockfall on Cirque Peak. We also could hear and see the F-22 aircraft flying overhead. 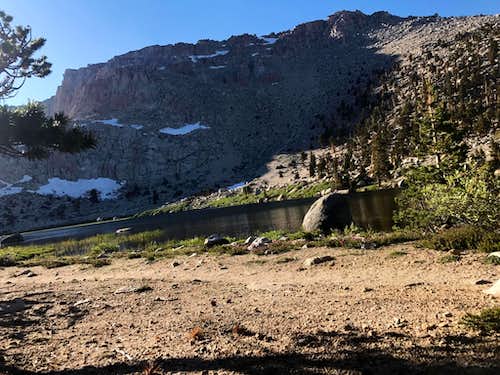 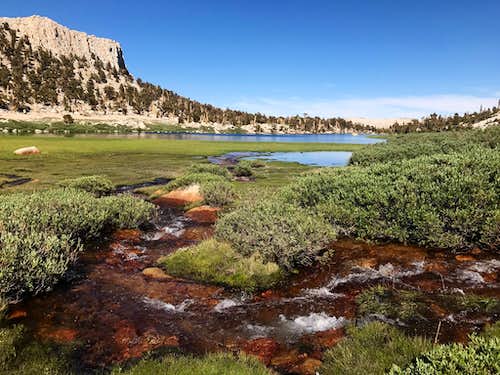 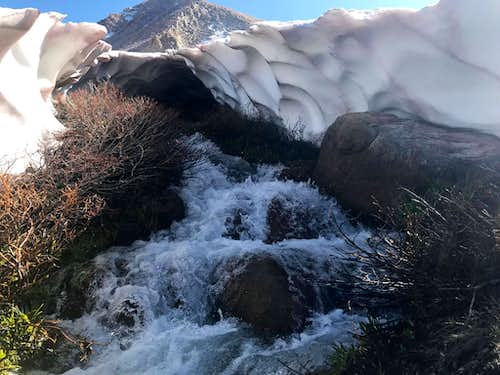 Stream under snow near the entrance to Long Lake 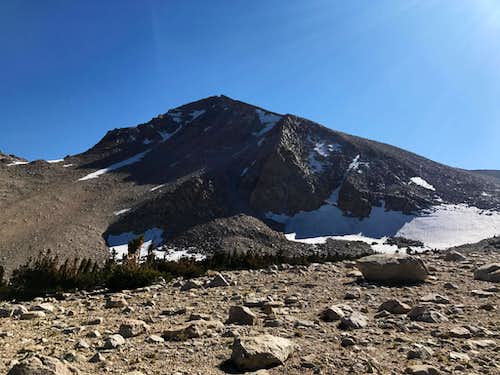 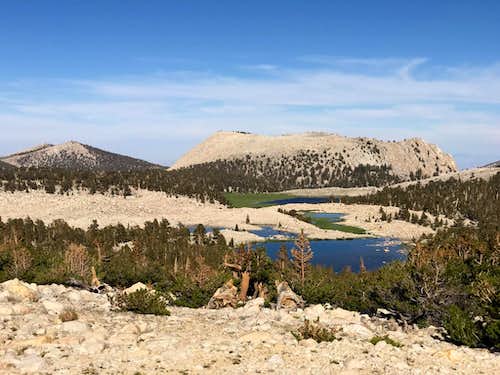 Looking down on the South Fork Lakes


We woke up early, around 3:30 a.m., and headed up the trail. The trail was fairly straightforward and easy, except for a couple of traverses on patches of snow. We were thankful to bring our ice axes. The trail up to New Army Pass was very nice, except the very end, where we had to climb up some 4th class terrain to bypass a steep section of snow covering the last 45 feet of the trail to the top. After gaining the pass, we were very dissapointed by the loss in elevation dropping down to Old Army Pass. The next mile or snow was straightforward on a trail, until you come to the steep last 0.5 miles. This looks very intimidating, but we followed the cairns up to the left, and the trail was very doable, just steep with loose sand. Miles and I, having 14er experience, reached the top at about 9 a.m., with Julian and Jacob following after. The top was awesome, with little to no wind, a phenomenon I have enjoyed every time I have been on the summit of a 14er.
On the way down, my three companions lagged behind. I began to suspect altitude sickness when they complained of headaches and feeling sluggish. Miles especially was feeling cruddy, and I had to be quite sharp with them to encourage them to get down the mountain. Although we were relatively at the low elevation of 13,000 ft., I was worried. I can totally understand why climbers at higher elevations are in severe danger when they are adversely affected by altitude. Thankfully, after some puke and headaches, we staggered back into High Camp. I had never felt better on a 14er, but I learned the important lesson that your group is only as a strong as the weakest member. 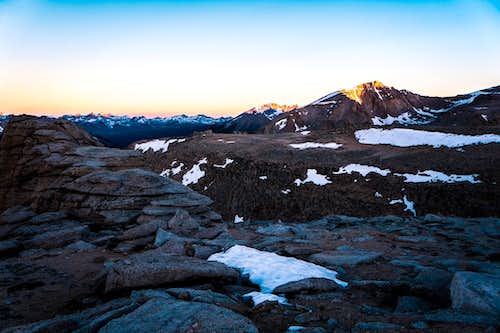 Looking towards the peaks of the Miter Basin at Sunrise 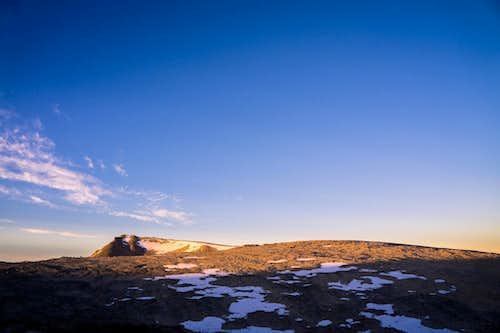 Looking back at Cirque Peak at Sunrise 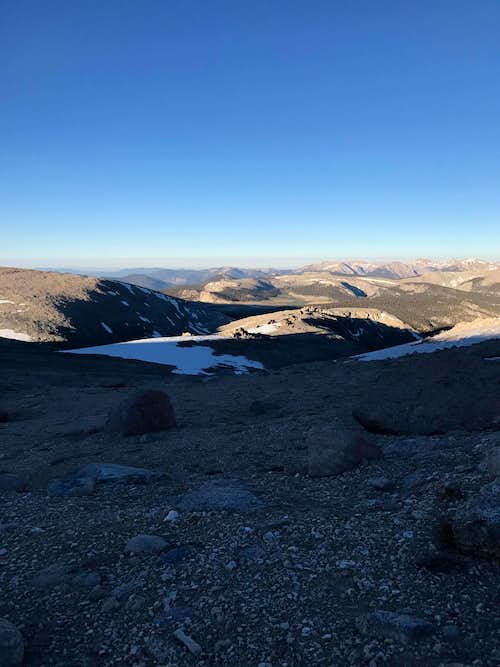 This hike was a lot of fun. I think it is doable in one day, but only for the extremely brave. The hike from Horseshoe Meadows to New Army Pass is longer than you think, and we definitely underestimated those 6 miles. Dealing with altitude sickness firsthand was a bit scary, but helpful for the future. Looking forward to getting up the rest of the California 14ers.

Check out this video my buddy Julian made of our hike.  https://www.youtube.com/watch?v=p3GiRn94Cow&feature=youtu.be

I want to thank Jacob Knopf and Miles Babad for many of the beautiful photos displayed on this TR.