The mountain is found just to the west of the largest settlement on West Falkland, Port Howard and is conveniently climbed from there via the southeast, east or northeast ridges around which a circular walk makes for a nice day out. The “ridges” are actually more like spines set in the face of the mountain, so don’t expect a ridge-walk in the conventional sense. The routes do, however, feature some spectacular examples of erosion as well as providing the walker with shelter from the ever present wind on the way up.

Summit views encompass the wonderful natural harbour of Port Howard below, the whole of West Falkland and across Falkland Sound to East Falkland where Mt Usborne, the Islands’ highest peak, is often visible more that 50 km away.

Onward travel to Port Howard is by air on the Falkland Islands Government Air Service or, since 2008, on the East/West Falkland ferry direct from New Haven on East Falkland. Car hire is readily available in Stanley. From there drive towards the Mt Pleasant airport. Follow signs from the airport to Goose Green and from there to New Haven and the East Falkland ferry terminal. The ferry docks right in Port Howard. Roads are almost all dirt and gravel but are kept in excellent shape for 2WD travel.

From Port Howard it’s about a 6 km walk to the top of Mt Maria via the most direct east side route.

Walk out of the settlement up the hill to “the road that goes nowhere”. This excellent new road was built to the south of Port Howard towards the originally planned site of the new ferry terminal. Work on it stopped when the terminal site was relocated to the original jetty within the settlement. Turn left on the new road and walk along it for about 1 km to just past the cattle grid.

Turn right off the road and head west towards the obvious ridge crest above. Reach the ridge and continue west on either the left or right of the spine depending upon which direction the wind is coming from. Once the ridge peters out head up open shale and quartzite slopes to the summit plateau. In the vicinity of a large cairn at S51 33.028 W60 06.797, swing round slightly south of west and across more or less flat ground to the summit about 700 metres away. About 2-2.5 hours from the settlement.

The summit is marked by another large cairn, a generator shed and the partially burnt out remains of what was the TV relay station for pretty well the whole of Camp. The remains are pretty ugly but the generator station sure makes a welcome shelter when that Falklands wind is doing its best to blow you off your feet.

Alternatively, continue down the “road to nowhere” for another 2.5 km beyond where you left it and head northwest up to the ridge on this side of the mountain. Walk around the ridge to the north and up to the summit. Less of the summit plateau need be walked from the side and the distance from the road is slightly shorter at about 5 km. The quartzite ridge on this side of Mt Maria displays some particularly fine examples of wind and/or glacial erosion.

As a third choice, walk out of Port Howard on the main road that goes west across the island. The road curves back to the north side of Mt Maria. At any convenient point head across to the northeast ridge-like feature which swings round and south to the top.

If you don’t mind a little road walking, you can traverse the whole mountain via the second two choices or drop off the east “ridge” from either and directly back to the settlement.

All land in the Falklands is privately owned. Any activities you undertake must be with the permission of the local landowner. Check with whoever you’re staying with in Port Howard regarding access permission. 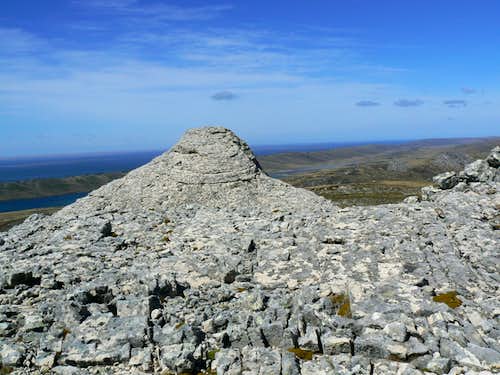 I would imagine that camping would be allowed by any cooperating landowner in Port Howard but you should check ahead first.