If I’m being honest, I was not expecting much from Mt McLoughlin. From the trip reports we read going into the climb, and the small amount of knowledge we were able to gather from looking at topos, I was really thinking that this climb was going to be nothing more than a small slog through some patchy snow that led to an epic view of the surrounding mountains.


I was wrong.  The first five or so miles were a encapsulated by the forest surrounding the mountain.  I spent a good two hours looking anxiously around the corner for a glimpse of the summit, only to be very un-disappointed by each new view, most of which consisted of tall trees glittering in snow, and long stretches of empty land covered in powder (which I had the misfortune of discovering was hip-deep).  I enviously eyed Andy on his skis and moaned internally at the difficulty I was having walking up the slope in snow shoes. But! I was definitely glad I had them once we started gaining elevation…


McLoughlin also has a lovely ridge line to follow- something that was also exciting for me since most of our other summits have been gradual pushes up to flat mountain tops- this mountain had a pretty epic drop on each side, which was RAD! Overall, besides being exhausted and ready for bed about 2 miles out from the car, this trip was both surprising and educational for me.  I’m eager to revisit this peak again in the future… hopefully with skis…


We chose to follow the East Ridge route from the PCT, starting at
Summit Snow Park. We pitched our tent in the parking lot, and fell
asleep as quickly as we could.  The moon, of course, was at its fullest
when we fell asleep and we felt a bit like someone was shining a
spotlight into our tent all night. Corie was amused; Andy was not.

Overall, McLoughlin was a good winter mountain to do.  It was a bit
longer than we expected but still made for an excellent climb-
especially given the conditions.  The trail was extremely well marked
and having relatively fresh ski tracks to follow up and down the trail
made this mountain seem very friendly to both climbers and skiers.  We
encountered a number of individuals during the final stretch to the
summit, all of whom were either packing a set of skis or a board;
McLoughlin is apparently well-known for its ski mountaineering access.

In the summer, it is likely that this mountain would be comparable to
the South Sister, given its ease of access, location, and the fact that
it’s basically a walk up a scree hill. 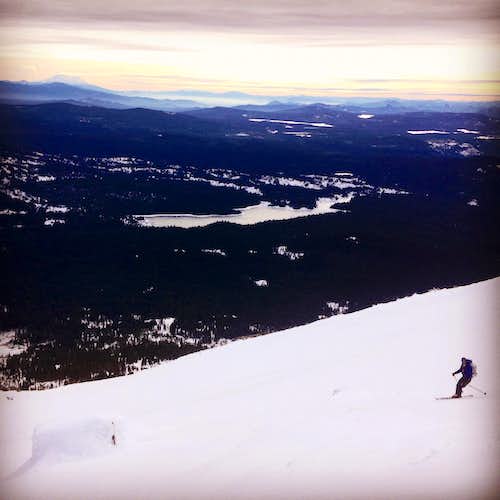 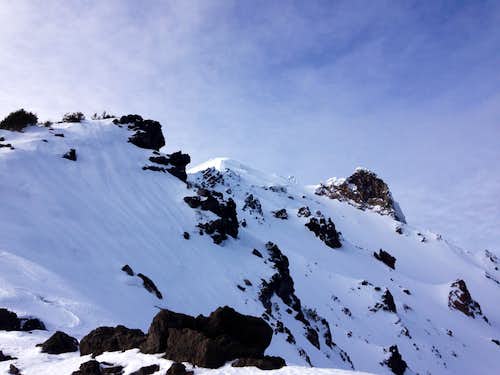 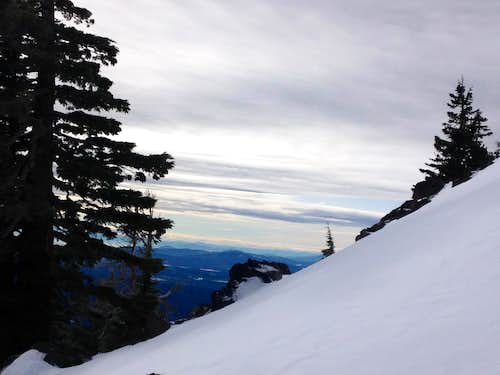 Snow out of the Trees 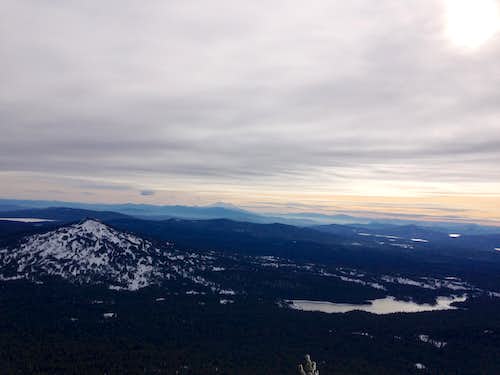 View from Up Top