Geographically Mt Richards occupies the middle ground between Rookery Mountain and Mt Harston in the chain of mountains running down the north coast of Saunders Island, one of the largest of the off-shore islands to the north of West Falkland Island which is itself the second largest island out of more than 750 in the south Atlantic archipelago of the British protectorate of the Falkland Islands.

Richards is just a few metres lower than its neighbours and is also flanked by two slightly lower high points to its west before the land slopes down to sea level at the “Neck” - a sand isthmus which is a breeding ground for three varieties of penguin – before climbing again to the summit of Mt Harston.

From either possible start point - at the Neck to the west or the Rookery cabin to the east - Richards is the most distant objective in the area and, is therefore, usually climbed as part of a day-long hike between these two points. If the weather cooperates and the wind isn’t too bad, you can stay on the height of land pretty well throughout the day and enjoy continuous and stunning views over Richards, Rookery and Harston, east to Keppel and Pebble Islands, south to that part of Saunders and beyond to West Falkland Island and north to nothing but the black South Atlantic.

All told it’s about 6 km to the summit of Richards from the Neck and 7 km from the Rookery cabin. A point to point walk without simply reversing the outward track might be possible by arranging transport for a fee with the owners of the island.

The initial slopes leading up from the sand at the Neck to the first of Richards’ west satellites are grass. Thereafter the usual barren heath land takes over and leads to the inevitable quartzite fins along the summit ridge. 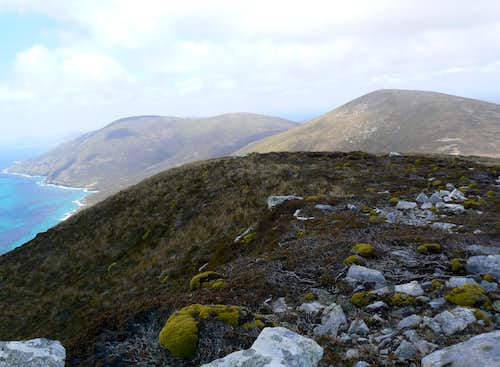 Mt Richards from the west

Onward travel to Saunders Island is by air on the Falkland Islands Government Air Service to the gravel airstrip near the settlement.

The owners of Saunders Island will ferry you for a fee from the settlement to either the Neck or the Rookery cabin. The best thing to do is get an all-inclusive price, including transfers, when making your arrangements to visit the island.

It’s a 15 km round trip from the settlement to the Rookery and probably twice that to the Neck over very rough tracks. You have the option to walk of course.

From the Rookery cabin walk southwest along a bench above the ocean until you have clear sight of a low point in the ridge of Rookery Mountain above. Walk up grass and then diddle-dee covered slopes towards the saddle. There’s no path, although the occasional sheep track can be used to avoid side-hill walking on occasion. Two streams run down from the saddle and walking beside either gives reasonable going. Once in the low point on the ridge continue southwest across boggy ground before switching to the south, crossing an open gravel field and up to the summit tor of Rookery Mountain.

Walk south off the summit of Rookery down towards a bump on the ridge below. Don’t go too far south and up to the high point. Instead turn southwest as soon as feasible and drop 250 metres down rather tedious balsam bog slopes directly to the grassy saddle below Mt Richards. Since Richards is almost the same height as Rookery you then gain all that back again as you climb west up mostly white grass slopes to the grassy summit.

From sea level at the Neck climb grass and then balsam bog/diddle-dee covered slopes southeast and directly up to the 410 metres top of the first of the western satellites of Mt Richards. Continue southeast along the high ground (boggy in places), down a slight slope and up to the second satellite – 395 metres. This is one is topped by some impressive quartzite fins. Traverse along the ridge to its end and then drop 200+ metres down to a very wide gravelly saddle in the centre of which is a large cairn at S51 19.385 W60 11.582. Continue southeast and up 250 vertical metres to the true summit of Mt Richards.

Resist any temptation to avoid going over the summits of the two western satellites on this route by traversing the side slopes to the wide saddle below the true summit. There is a band of large steep stone runs below the second (east) satellite that makes for unpleasant going. Stay on the high ground at all times. 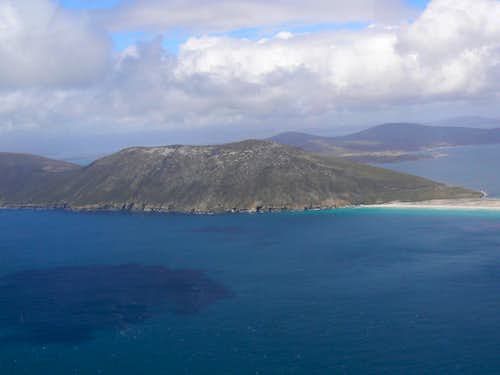 Mt Richards from the air to the north

All land in the Falklands is privately owned. Any activities you undertake on Saunders must be with the permission of the owners of the island, the Pole-Evans family. Just mention where you want to go and what you want to do and make sure they’re OK with everything.

The settlement on Saunders Island offers self catering accommodation in two properties, one for 10 and one for 6 people. It’s probably not practical to stay here and day-trip Mt Richards unless you arrange transport with your hosts.

The converted portakabin at the Neck is basic but offers surprising comfort for such a remote spot. It has two bunkrooms, each sleeping four, a communal kitchen and a bathroom with a real bath. In recent years it’s been equipped with a generator for 24 hour AC power. During my first visit in 2005 only 12V DC was available.

The settlement has a small store so you don’t have to lug supplies in on FIGAS.

I don’t know if camping would be allowed on Saunders. Phone ahead and ask first.

Current weather forecast in Stanley. Shouldn’t be too different for Saunders Island.