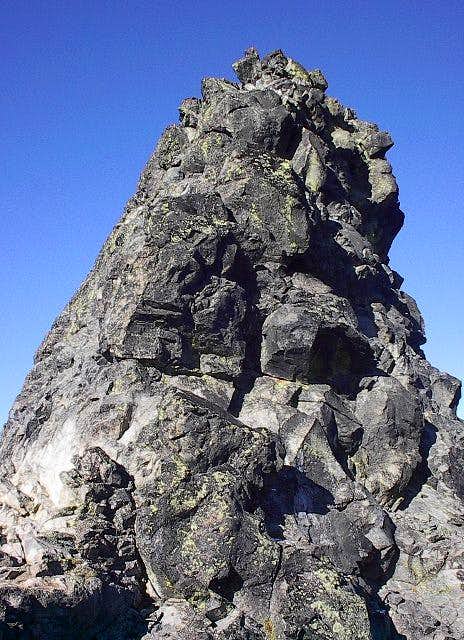 After climbing Mt. McLoughlin on the 4th, Bob Bolton and I went back into Klamath Falls and celebrated the 4th with his wife and some of her friends. Some great food and all the neighbors setting off fireworks made a pretty good show. About 9 pm, we both took off in our own vehicles and drove up to a rest area near Beaver Marsh on highway 97 and slept in our vehicles, Bob in his luxurious 4Runner and myself in the backseat of my Honda Accord (yeah, you can sleep anywhere if you're tired enough). Before the sun was fully up, we commandeered one of the picnic benches in the rest area and fixed breakfast on my backpacker stove and soon were on the way to Mount Thielsen, which towered above the rest area to the east. We stopped enroute several times to take pictures of it in the early morning light as we headed up OR 138 towards Crater Lake and Diamond Lake. The trailhead is just off the highway and is a Northwest Forest Pass fee area (it has a nice potty of course, Northwest Forest Pass dollars at work). 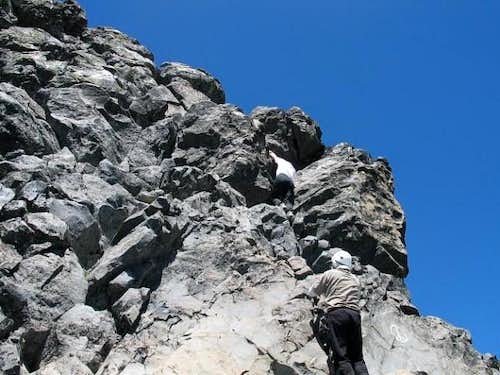 The sign says 4 miles to the PCT and we covered those relatively monotonous but well graded miles in about 90 minutes. Once you connect with the PCT, you begin following the ridge up the mountain. A trail of sorts takes you up to 8000 feet and then it gets a little sketchy at times, mainly class 2 with occasional class 3 scramble spots, none of it difficult. Finally we came to the base of a couloir on the western side and followed it up to a big ledge from where you could get to the final 80 feet of Mount Thielsen. 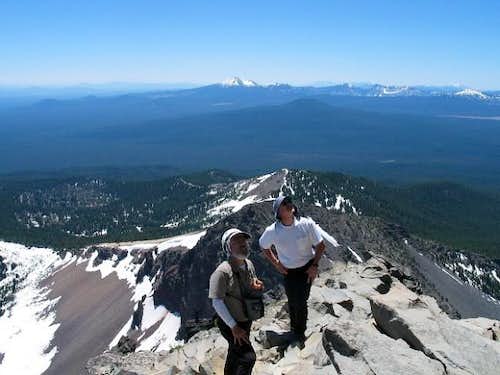 Bob and climber study the route up

Without much hesitation, Bob figured out a route up the class 4? rock and scrambled nicely to the top. I, on the other hand, was a little more reluctant and didn't want to follow Bob's route up. I actually wasn't worried about the getting up, I was more worried about the getting down. Then along came Jeff and his dad. Jeff took a different route up and that was the route I went up, with Jeff acting as a guide on his second climb back to the summit (just for me, thanks Jeff), pointing a few hand and footholds out to me both on the way up and the way down. 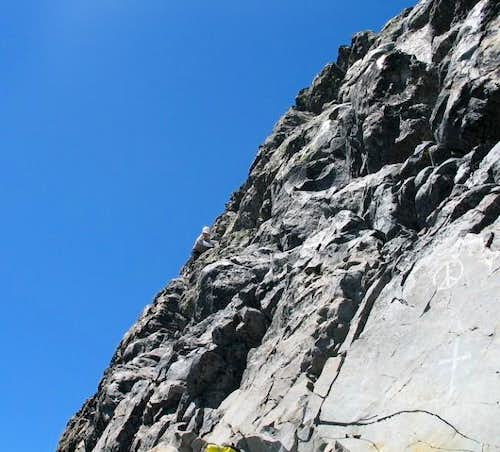 Bob heads up to the left of normal route

The summit area itself is relatively comfortable and as mentioned in a previous report, there are two pipe-like containers on the summit. One is locked and the other was open on one end with lots of scraps of paper and a red pen which I used to put my name on one of those paper scraps. Not a real long term solution but always fun to sign a register. I covered the summit (very easy to do) from side to side and after I was satisfied that both Douglas and Klamath county lines were covered, I shook hands with Jeff (neat young guy from Ohio) and with him pointing out a couple of key foot holds near the bottom of the route that we down-climbed, I was soon getting high fives from my fearless friend, Bob Bolton. 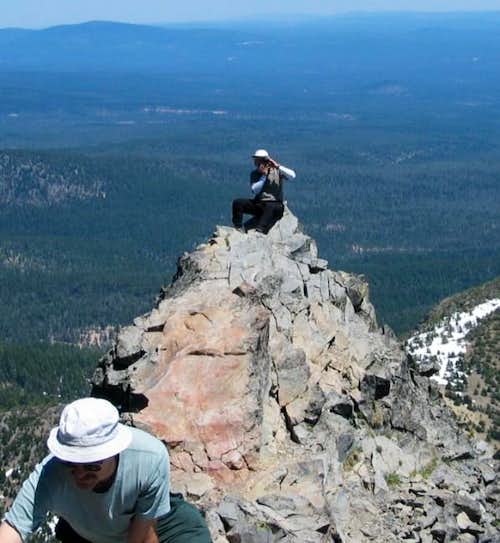 Bob shooting some of the action

Every county I've had the pleasure to do with Bob has been nothing but fun; he loves this stuff as much as I do. One sad note is I didn't take my camera or GPS to the summit, both sat snugly in my daypack, lost in the excitement of the moment. That little 80 feet was probably the most exposure I've had to this point in the mountains recently. In retrospect, I don't think I'd have any problem doing it again and actually wouldn't mind just to get the pics I missed. 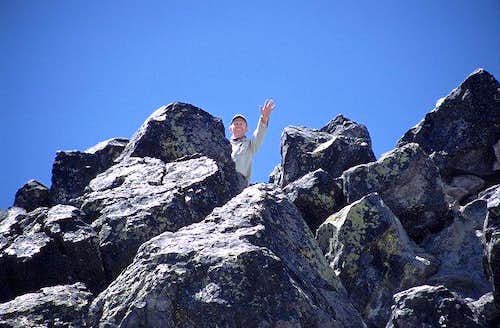 Me on the summit (telephoto shot by Bob)

Bob and I spent over an hour on our lofty perch and Bob scooted over to the extension of the ridge on the east side and I took a few pictures of him sitting out on its airy heights. Great views in all directions, Shasta to the south and the Sisters to the north. We could see the caldera of Crater Lake although I couldn't see the water. "Unbelievable" high point adventure. Then we made our way carefully down the top 1000 feet until we were pretty much back on a trail of sorts (lots of scree). 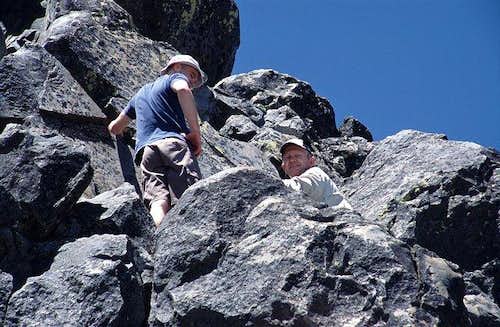 Me almost back to the start

Tons of Kodak moments on this mountain

Four hours up and three hours back to the car. Take mosquito repellent for the lower trail area and plenty of water and sunscreen on a sunny day (when you get em in Oregon).