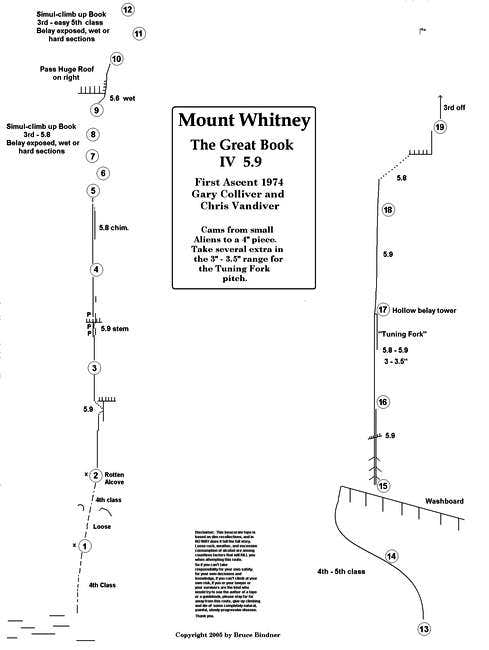 I wouldn't exactly say we 3rd classed this area. We simul-climbed, placing protection, and stopped to belay (without bringing the second up to the stopping point) whenever we encountered any short, cruxy sections. Switched leads whenever we ran out of protection. Some of the climbing was definitely third class in sections, particularly where the angle eases off (visible in the upper third of the route below the washboard in the photos) but even those sections we simulclimbed, placing pro. And yes, there were definitely harder sections well into 5th class.

Pitches 6 - 15 is only an estimate, since we were climbing with those new-fangled 50m ropes (60m were unheard-of and 45m were standard).

As far as 5.9+, I don't recall encountering anything as hard as the 3rd and 4th pitches until after we reached the washboard: Nevertheless, senility take its toll here at the Old Climbers' Home as well, and I would be very interested in fleshing out those rather vague "simul-climb" areas with any specific details that you could dredge up, ratings, belays, ledges, anything.

Thanks for the feedback!