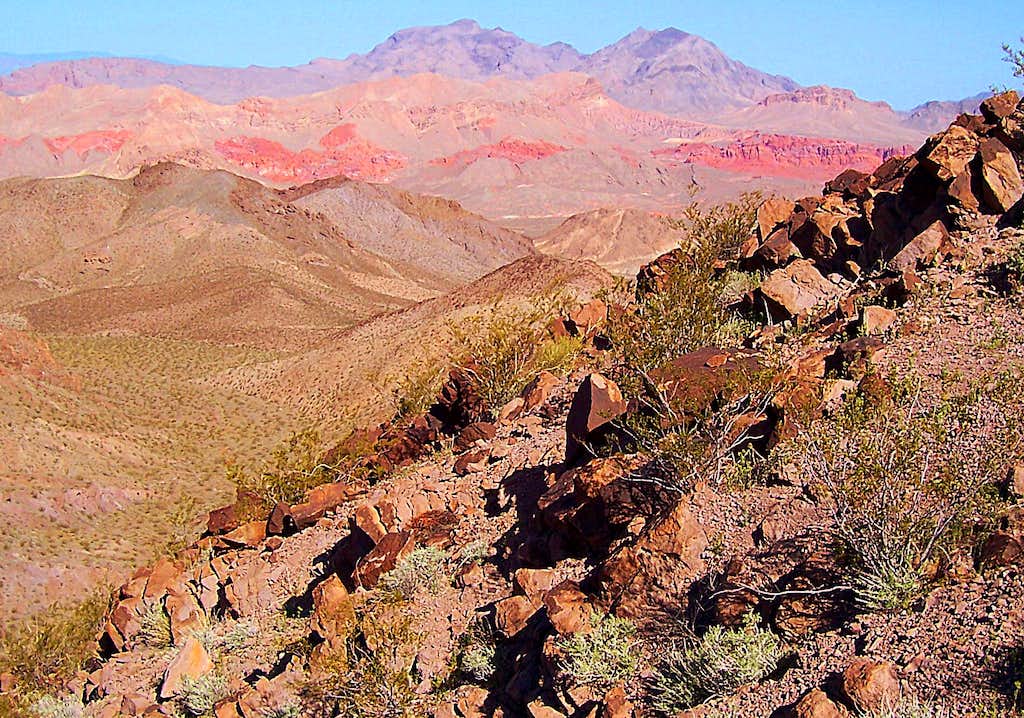 The Muddy Mountains consist of rugged limestone cliffs and canyons. A thrust fault has overlain limestone over sandstone. Sandstone is exposed through a FENSTER, or erosion-caused "window," through the limestone at Bowl of Fire and Hidden Valley. Conglomerate rock forms light brown cliffs at the Gale Hills. Gypsum-bearing soils of brown and red hues are present in some of the lowest elevations, including Anniversary Narrows at 1,900 feet. Elevations throughout the Muddy Mountains Wilderness range from about 1,700 (at Lovell Wash) to 5,400 feet (at Muddy Mountains High Point.) The dominant desert plant of this area is Creosote brush.The only trees present are desert catalpa and a few cottonwoods. Rare plants, including Las Vegas buckwheat and bearpoppy, occur in the gypsum-rich soils at the lowest elevations. Animals include desert tortoise, a few burros and wild horses, and desert Bighorn Sheep. As evidenced by the deep red, yellow, magenta and orange hues, colourful sandstone outcrops are found in Bowl of Fire and Hidden Valley. Anniversary Narrows is a small slot canyon in limestone. Approximately 7 miles of trail are designated in the Wilderness at Hidden Valley, the Gale Hills and Anniversary Narrows. You won't find trails leading to the two highest points in the Wilderness: Muddy Mountains High Point (on the left), and Muddy Peak (on the right.) You can see a portion of the Northshore Road in this picture. The darker rocks scattered upon the slopes in the foreground are volcanics from the Hamblin Mountain paleo-volcano. March 21, 2008
« PREV NEXT »