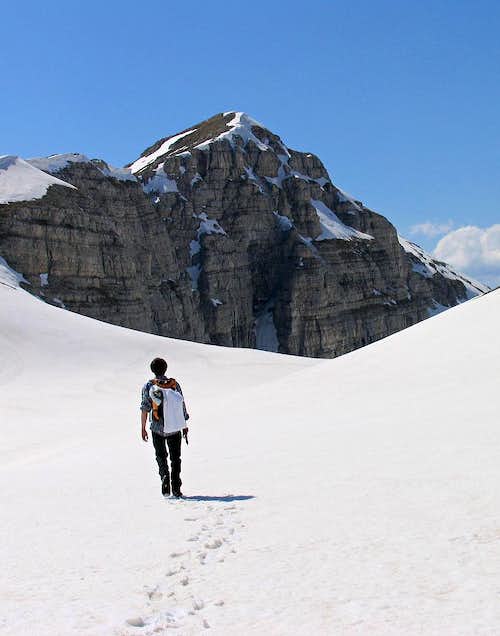 Murolungo is a beautiful mountain, placed at the border between Lazio and Abruzzo regions. It’s the higest summit of the Monti della Duchessa subgroup, and from its lonely top there’s a wonderful 360° view. Murolungo in italian means “Long wall”: in fact, Murolungo offers two relatively big rock faces, in particular the south face is one of the wider of the Apennines, although it’s not so attractive. Because of its nature, this mountain is mainly interesting for hikers, but it can offer some challenges for mountaineers and ski-tourers too. Murolungo rises between two interesting valleys: the long and spectacular Valle di Teve at south, the steep and short Valle del Cieco at north. This two valleys are covered by wonderful beech forests, rich of wildlife. Murolungo is formed by a long ridge running from east to west, and it has two beautiful rocky face: the south face dominates Valle di Teve and is 3km long and 500/600m high; the north face is smaller but, in my opinion, more beautiful, and rises up over the Duchessa lake. A large terrace, called Jaccio dei Montoni ("Rams' pasture"), is placed between the summit and the top of the south face. The access to the east ridge is the saddle at the top of Valle Fredda, a short valley rising from Duchessa lake; the access to the west ridge is from the shepards'huts in Valle del Cieco. The east ridge, panoramic and aereal, links Murolungo to the rest of Velino range, while the longer west ridge ends over the small town of Càrtore.

The best access to Murolungo is the small village of Càrtore (RI). You can reach it by car taking A24 highway, until the station "Valle del Salto" (75Km from Rome, 83Km from Teramo). From there, follow the route SS578 to Avezzano for about 1Km, then turn on the left and follow a dirty road, passing under the highway, that in about 4Km reaches the town. 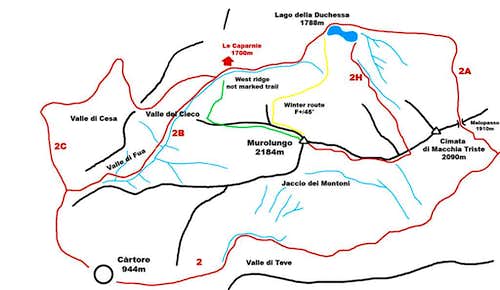 Climbing on the north side

The "Normal" route to Murolungo starts from Duchessa lake (1788m) and runs over the east ridge: skirt the lake on the right (coming from Valle del Cieco), then bear on your right (south) following the trail nr. 2H, rising up the Valle Fredda; in about 45min you'll reach the east ridge: follow the ridge, very scenic, until you reach the summit (2184m, 1h 30min from the lake) An alternative route could be the west ridge: from the first shepherd's hut, leave the marked path and head for the west ridge where the wood ends (you can take as reference point a pole, visible from the hut), exploiting a not marked trail crossing the trees. When you are on the ridge, follow it to the summit (1h 30min from the hut) Climbing routes Murolungo offers two rock faces: the south face, very big for the apenninic standard (more than 600m high and 3km long), over Valle di Teve, and the north face, smaller (200m high) over Duchessa lake. The bad rock, the grass and the gravels keep the climber away, but there are some climbing routes. Sure, Murolungo was climbed by the strong alpinist and Alpine guide Gigi PANEI, great Mont Blanc guide, born and grow up in Borgorose, the town at the feet of Murolungo. Unfortunately, he didn't leave any trace of his activities on the home-mountain. PANEI was a great friend and climbing-mate of Walter BONATTI, and some legends say that the outstanding mountaineer climbed Murolungo... A list of the routes (source Ascent (website of Giancarlo Guzzardi) and L'Appennino, magazine of Cai Roma) South face (These routes are climbed usually in summer) 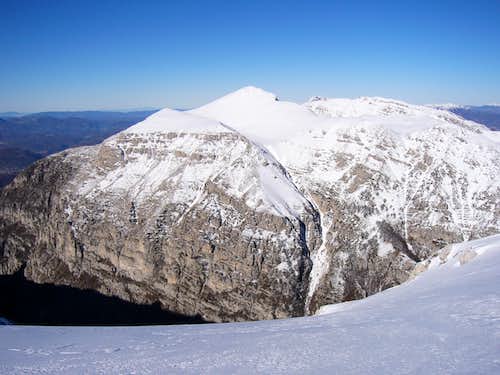 North face (These routes were opened and climbed in winter)

The north side of Murolungo offers many opportunities of easy climbs on snow, with axe and crampons: I climbed this easy and nice line the 26th of April 2006: 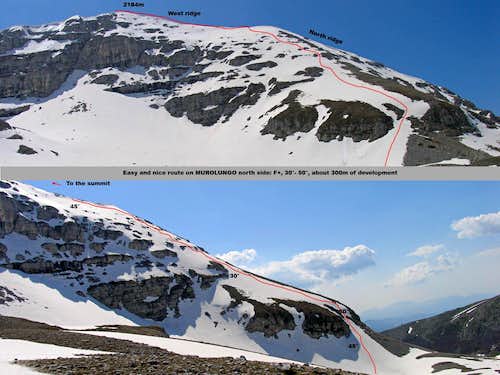 F+, 40° with a stretch at 50° The route starts at the left of the north face, climbs a quite steep slope and, following the north ridge, reaches the west ridge few dozens of meters from the summit. I draw it in yellow in the map published in this page.

Murolungo is placed at the border between Monti della Duchessa Reserve and Velino-Sirente Natural Park. In the protected area no fees are dued, no access permits are required, but free camping is not allowed (you need a special permit) and you have to respect the rules for environment protection in force in the Park. In particular, all users of the Park are asked to stay on marked trails to protect against erosion. Passing through Valle di Teve is forbidden from 30 may to 31 october to not disturb the golden eagles' reproduction. Rangers controls are frequent...

The small town of Càrtore offers very nice and typical apartments for rent, at a good price. 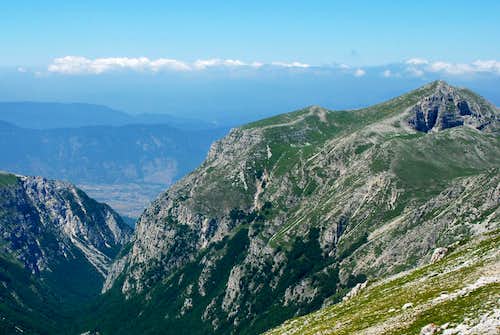 Panorama from the summit 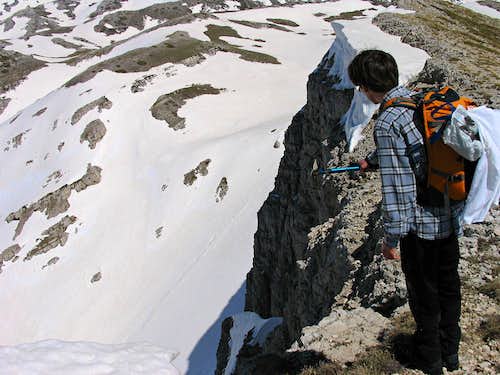