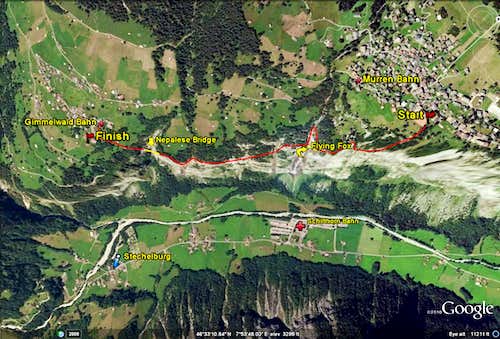 The Lauterbrunnen wall: the Murren-Gimmelwald Via Ferrata runs along the top from right to left.

This is a recent addition to the Swiss family of Via Ferrata (a.k.a. Klettersteig) – having opened in 2008. It isn’t difficult – K3 – but is very spectacular. A head for heights is an absolute must! Unusually, it involves descent of 300m. There is practically no ascent – so (aside from any excess energy expended hanging on, on the exposed bits) it is not a very strenuous outing. But it is definitely enjoyable and worthwhile for any visit to the Lauterbrunnen Valley.

The route is accessed via the first stages of the Schilthorn cable-way, starting in the picturesque high alpine town of Murren at 1640m. From there the route covers 2.2km along the top of the vast Lauterbrunnen Wall as well as descending 300m in altitude – all the way down to Gimmelwald. Guide time is 3 hours, but it can easily be done faster. Naturally it is best done on a sunny day if the extraordinary views are to be appreciated. However, with reasonable ability and experience, it is possible to do on a damp day, say when the high summits are out of condition. The exception here being a thunderstorm – unless you want to find yourself attached to the greatest lightning conductor in the area!

Overall the route consists of mostly scrambling and steep walking in the trees at the top of the great Lauterbrunnen Wall. In one place the route dips onto the wall itself and for a section about 20-30m long it is incredibly exposed, stepping on steel brackets, cemented into to rock, with a 600m drop into the cable car car park immediately below. I’d recommend not carrying your wallet in your back pocket here. But it is (apart from during a thunderstorm) very safe, in that with appropriate Via Ferrata kit, it is possible to be clipped on, all the way along. The Grande Finale of the traverse is the crossing of an incredibly airy ‘Nepalese Bridge’ over 80m long and strung up above a nearly 300m drop.

There is another airy traverse part way along the route, crossing a deep, wide gulley. This is a ‘Flying Fox’ – a 60m or so long, single wire crossing. Specialised equipment is needed – and access is only permitted under the supervision of a qualified local guide. The alternative to this vertiginous crossing is a path which deviates a few hundred metres into the back of the gulley, away from the cliff edge, before crossing a small Nepalese Bridge over a stream, and returning to the cliff edge again. 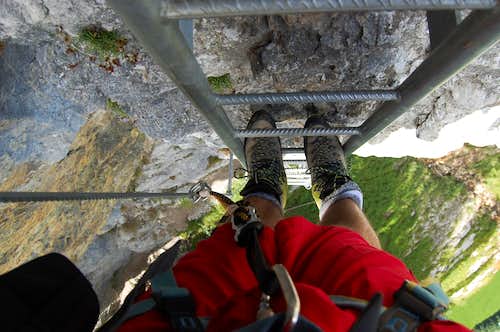 An exposed ladder on Murren-Gimmelwald via Ferrata. 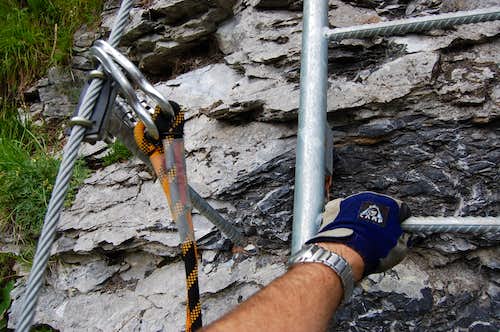 Using via Ferrata Kit on a ladder

The Via Ferrata is some distance down the sensational Lauterbrunnen Valley, in the Bernese Oberland of Switzerland. There are easy road and rail connections with Interlaken. Pass through Lauterbrunnen and then a few kilometres beyond is passed a big campsite on the right, and a little further on Stechelberg and the Schilthorn Bahn (cable-car station). There is another campsite close by.

First catch the Schilthorn Bahn cable car up from Stechelberg. This in itself is an exciting ascent up the immense Lauterbrunnen Wall – alongside the deep gorge, which is spanned near the top by the ‘Grande Finale’ Nepalese bridge. It is worth being positioned near the windows at the front of the cable car – and if you are lucky you may catch a few scared (or exhilarated) adventurers in the process of crossing the abyss. Note that it was near to this place, that in the 1960’s film ‘On Her Majesties Secret Service’, James Bond judo-flipped one of the bad guys over the edge – to (one presumes) splatter messily in the centre of Stechelberg, quite putting the locals off their Gluewein.

Up at Gimmelwald (~1350m) catch the next cable car, going on up to Murren, at 1640m. Alight here and walk up the high street for a few hundred metres uphill, until you reach the Sportchalet. See link 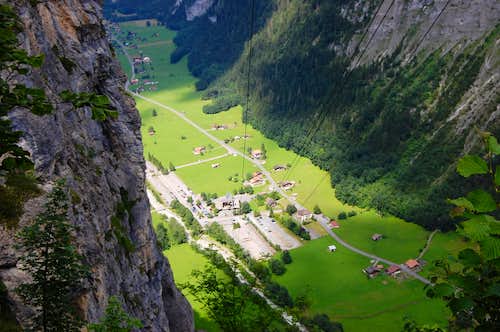 First stage of the Schilthorn Bahn cable way from Stechelburg to Gimmelwald. 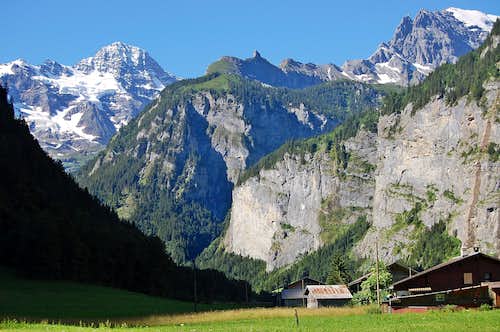 Lauterbrunnen Valley. The Murren-Gimmelwald via Ferrata runs along top of cliff. 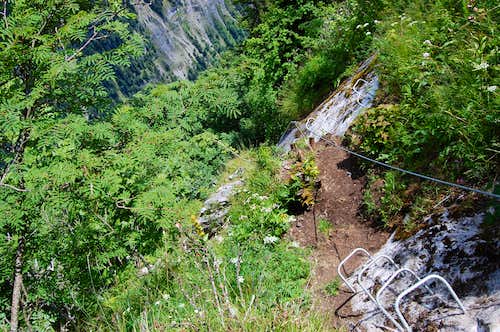 At first the route is straight forward, heading down through the trees. 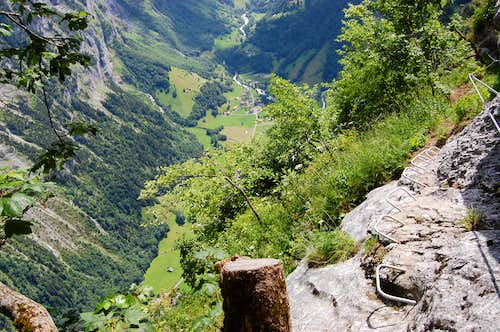 With further progress there is a gradual growing awareness that ahead looms the abyss.

At the back of the Sportchalet in Murren are some tennis courts. Walk round these past a sign for the Via Ferrata, through a sort of tunnel – and you emerge at the start of the route, in the trees that line the (as yet unseen) edge of the huge precipice below. Here is an appropriate place to kit up.

The route now heads steeply downhill. There is a cable to clip into, but the going is nonetheless straight forward and it isn’t especially necessary. With further progress there is a gradual growing awareness that ahead looms the abyss. And presently the valley bottom can be seen through the trees an impossible distance below. The path can soon be seen to be merging with the cliff edge – and although still straight forward, most would probably gratefully clip onto the cable at this point!

Now there is no doubt about the drop. It is breathtaking, straight down 600m, into the car park of the Schilthorn Bahn. And the route is going right into it – no longer a path now, but steel brackets, thoughtfully cemented into the rock down on the cliff.

The steel brackets now wander diagonally down and across the cliff top. It is a cinch to step down one to another, but somehow that 600m of empty space underneath takes the breath away – and I would suggest all would now be ensuring they were clipped to that reassuring cable, making sure one lanyard is unclipped at a time to cross the stanchions supporting it. This would be a bad place to lose ones wallet out of a back pocket. 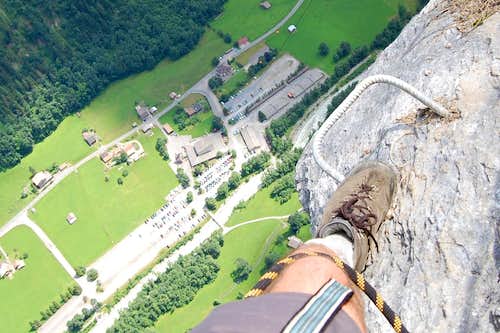 This would be a bad place to lose a wallet out of a back pocket. 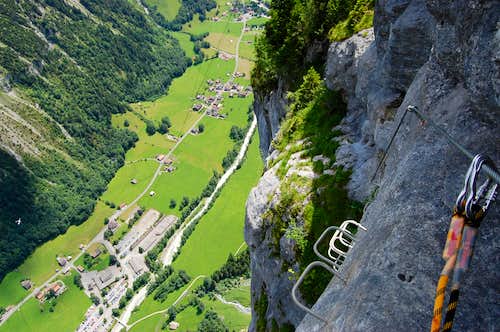 The steel brackets now wander diagonally down and across the cliff top.

Interestingly though, following the theme of the wallet, when I came along here for the first time, I encountered a key – playfully balanced on a little protuberance alongside the route. Clearly it had fallen from someone’s pocket. Very carefully so as not to dislodge it – I leaned down and picked it up – mindful of the likelihood that if I knocked it off, it could in all seriousness end up making a hole in a car roof – or someone’s head. A little later I encountered a party of Germans. It was their key – to the door of their Chalet – and they hadn’t yet noticed it was missing.

Back to the precipice: the brackets descend round a corner – and then horizontally for another 20m or so, to the reassuring sight of a ledge – with beyond it, the rather dizzying spectre of cable car lines plunging sickeningly into a building alongside same said car park lost in the abyss below.

Joining the ledge, there may be a sense of relief. The great empty space is now behind. Ahead, the route is path again – heading gently downhill through trees. There is cable to clip in to still – but once again, it is barely necessary.

After a few hundred metres there is a slight clearing at the cliff edge – and a precipitous gulley bars further progress. A thin wire stretches 60m across the gap. This is the ‘Flying Fox’. Note that it is not permitted to use this unless under the supervision of a local guide. The alternative is to follow the path, keeping to the gulley edge for a couple of hundred meters or so. At the deepest extent of the gulley is a stream. A cute little Nepalese wire bridge spans this little crossing. The path then follows rocky outcrops – climbing on more metal brackets – on the far wall of the gulley before going round the corner and along the cliff edge.

The route continues to be straight forward, but with one section of modest exposure – where it is necessary to down climb 3 ladders, one of which just slightly passes the vertical. This is the only place which is mildly strenuous – where for a few moves weight is being supported by the arms. 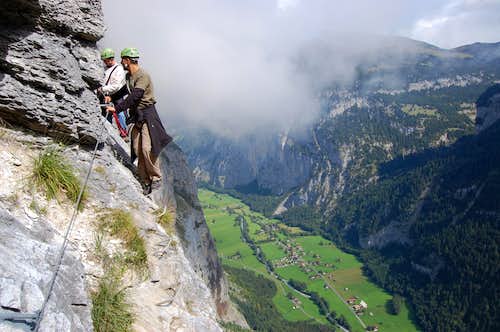 Looking back along the exposed section. 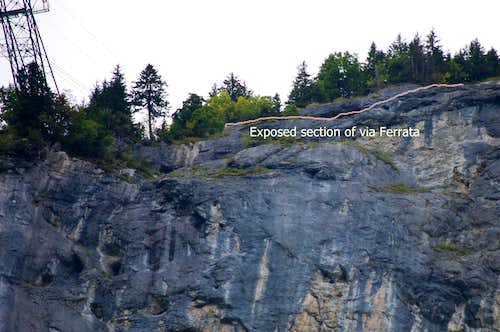 Telephoto shot looking up at the exposed section. 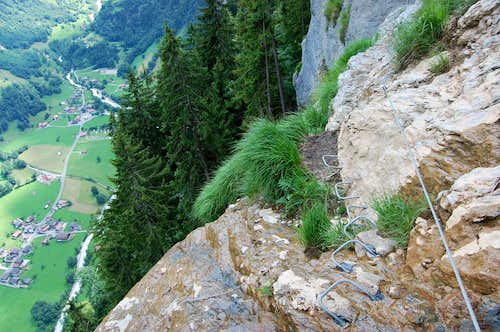 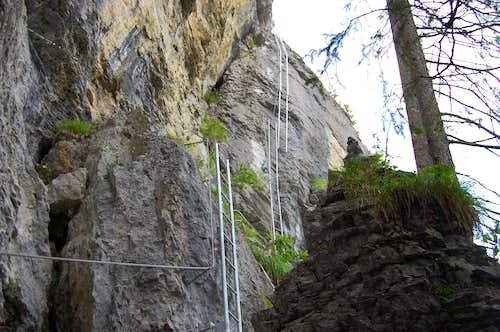 The last moderately exposed section before the Nepalese bridge is a series of 3 ladders, one slightly overhanging.

Back into the trees again, for more forest walk – but then abruptly the Grande Finale is in view: the amazing ‘Nepalese Bridge’ – consisting of a very narrow walk-way, with 2 wires acting as hand-rails. And there is the reassuring presence of a cable to clip in to. Once again, this would be a bad place to have any valuables in a back pocket. It would be a very bad place to be in a lightning storm – and at least un-nerving in very strong winds. 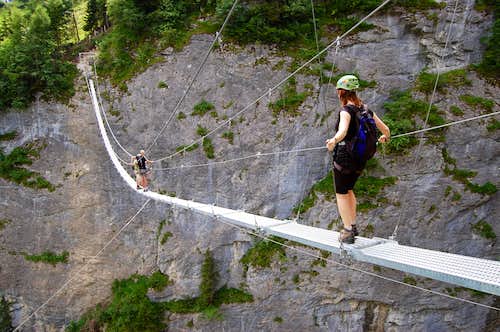 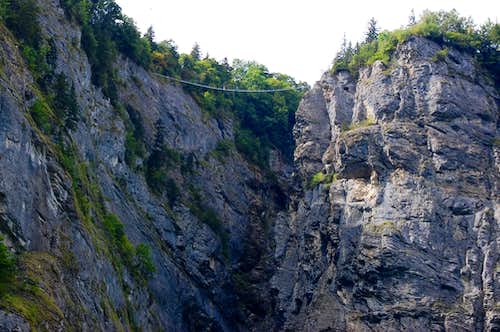 The Nepalese Bridge from below. 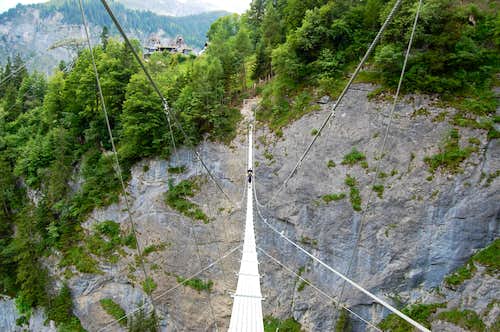 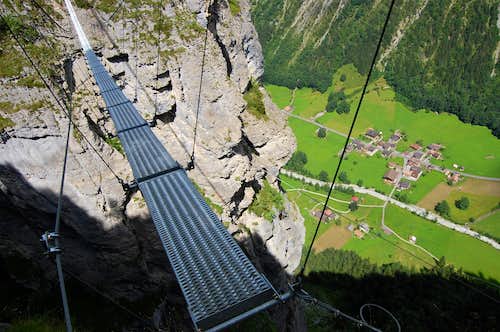 On the bridge, looking back.

A full body harness, Helmet and via Ferrata kit is required, in addition to normal attire for a day out in the mountains at modest altitude.

There is no charge to use the Via Ferrata, nor permit to be obtained. However, ‘The Association for the Murren-Gimmelwald Via Ferrata’ is grateful for donations – and collection boxes are placed along the route accordingly. After all someone should pay the poor geezer who cemented all those metal brackets into the cliff top!

There are common sense rules about safety – see notice at the start.

As already mentioned, the ‘Flying Fox’ section is off limits to the general public unless accompanied by a guide. Those unconfident in Via Ferrata technique and inexperienced in mountain excursions should also consider taking a guide. 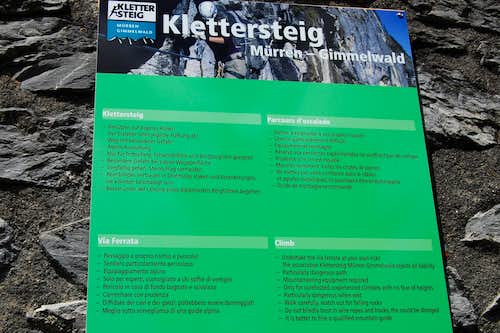