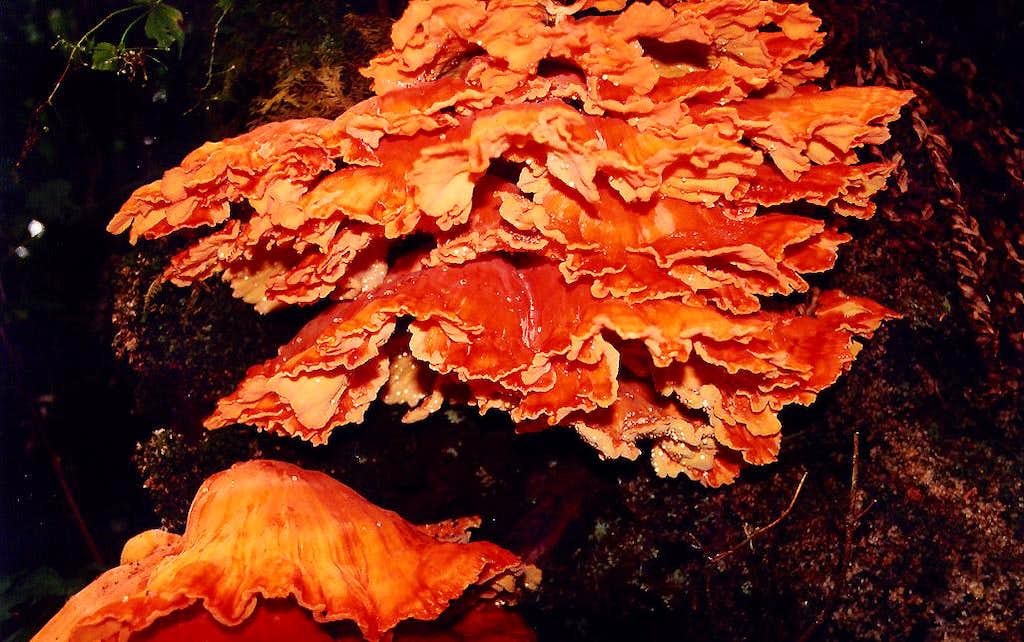 Will try to provide a name shortly.
« PREV NEXT »

laetiporus sulphureus? (Did you maybe dial up the red just a little?)

Will refer to Sharon our household mushroom expert.

The red was not intentionally goosed. I try to match the original print on color values when posting. I can't recall the film at this time, but the date is such that there is a chance that the manufacturer goosed it for me. Also did not check to see if the print was goosed.
However, I do recall the fungus seemed especially brilliant. I

Where are my manners? Thanks for noticing and commenting.

I ask because the background (bark? leaf litter?) looks reddish to me. L. sulphureus is more commonly mostly-yellow (hence the name); it can attain a bright orange-red in spots but usually it's not so overwhelming. I'd suspect an infection of lobster-mold(Hypomyces) but to my knowledge, the bright red species of hypomyces only colonizes Russula and Lactarius, which this ain't.

Nartred, thank you for the identification! Don, if your are satisfied with the information received, please detach your picture from the Unidentified flora and fauna album within the next week so that the album remain 'fresh'. Thanks.

Had time to dig out the original print this morning. The print itself is +2 for what I believe is the red values. Compared to the print, the background has a little bit more of a reddish cast than the print, though it is is not very much so. There are whites and greens that seemed to be unaffected. The over all value of the colors may be a little denser in the scanned image.I am looking at a different, larger lcd monitor as opposed to the smaller crt that recently went bye-bye. The old monitor had brightness jacked up to the max the last couple of years and still was inadequate for darker areas. (See lower left portion of my Strawberry Lake pic.)

Subjectively, this was the most intensely colored version of this or any similar mushroom we have ever seen. We both remembered it has the most intensely red-orange fungus of this type we had ever seen.
So... If I head to bet one way or another, I would say this is slightly redder than the original specimen, but not by much. Thank you for your comments. Now...

My recollection is that the bright white hot spots were not liquid but relatively hard globules that had come from the mushroom. We saw some similar exudations (?) on a brownish conk on the east side of Three Finger Jack once. Sharon may have noticed them other times, she is our mushroom person, although currently unable to locate Mushrooms Demystified, her bible for such things. Any thoughts on that?

I agree. Detached. Likewise the fritillary from the Coast Range image.

You two are more confident in my fungus ID than I am. L. sulphureus is the only one I can think of that it might be, but it's not a great match. Aside from the unusual color, we'd have to assume that this is an old specimen that has gone a bit droopy.

As for the white nodules, I have no idea. I wonder if it's some other fungus growing on/in this one...