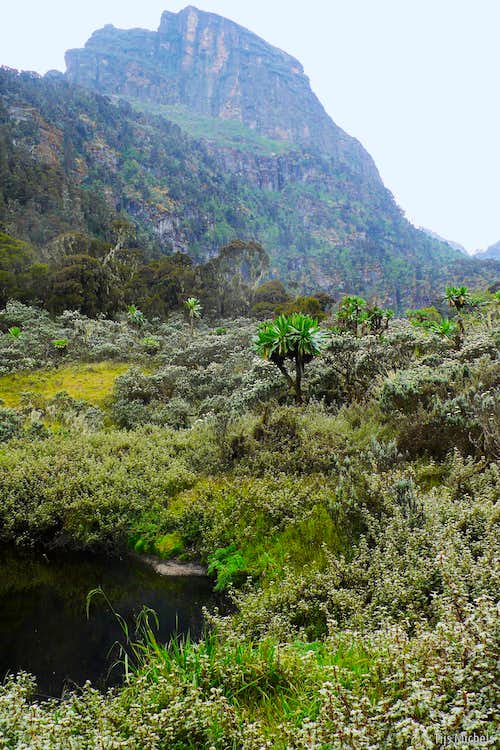 The Mutinda Lookout (3975m) from the point where the first Giant Groundsels (Dendrosenecio) start to appear.
At nearly 4000m, the Mutinda Lookout offers stunning views in all directions and otherworldly Afromontane vegetation, as well as the advantageous possibility to "climb high and sleep low" en route to Mt. Stanley / Margherita (5109m). 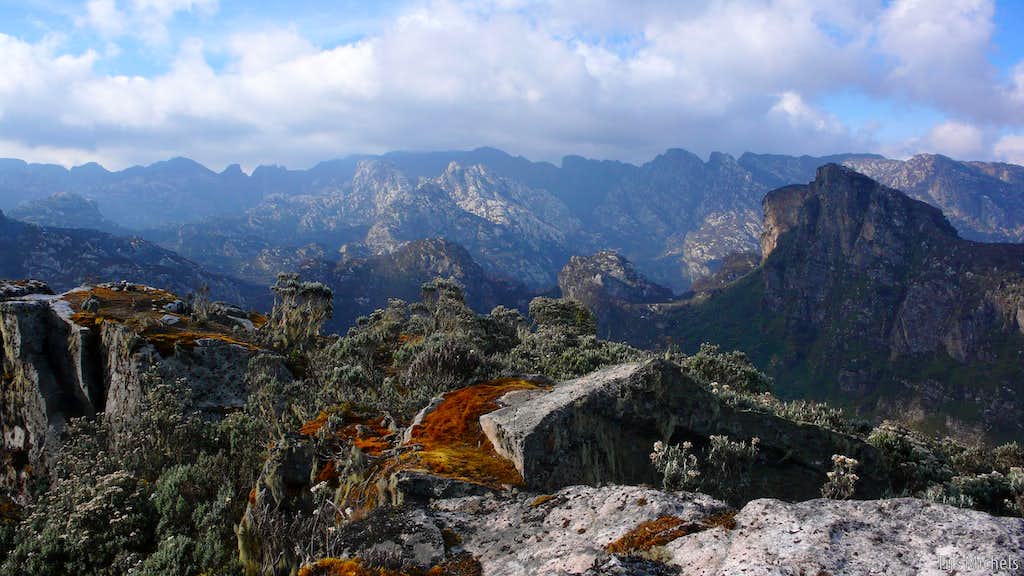 Looking north from the Mutinda Lookout: splendid colors of the Rwenzori. 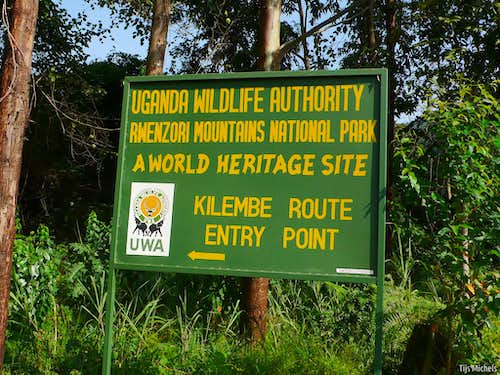 Trailhead of the Kilembe Trail near the Mulyambuli Rangers Post (1727m).
The Mutinda Lookout (3975m / 13041ft) belongs to the little-known Rwatamagufa Group, whose highest summits are Rwatamagufa (4260m) and Okuleba (4328m). It is not to be confused with the nearby Mutinda Towers (4084m). The latter are among the most difficult peaks of the entire Rwenzori (UIAA 3), and were only first climbed in 2005, by C. Burns, B. Bach, C. French, Babugkale and Bosco. 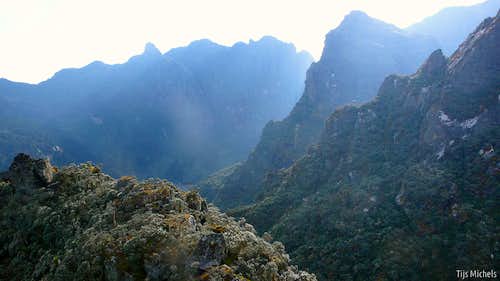 Looking south from the Mutinda Lookout: towering cliffs of the Rwenzori. The high peak in the back to the far right could be Rwatamagufa (4260m).
The Mutinda Lookout only became doable when on September 27, 2008, the Kilembe Trail was opened, offering at last an alternative to the classic Central Circuit. If the scenery of the Rwenzori is already downright otherworldly, the part of it crossed by the Kilembe Trail is said to be the best of the entire range. "Ruwenzori-Kenner bezeichnen diesen Teil des Gebirges als landschaftlich am schönsten." (Kiendler, p. 206.)

Here is a very good map of the Kilembe Trail. 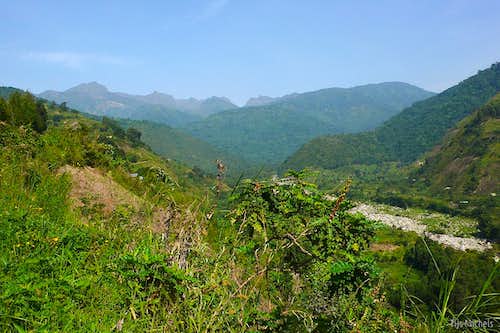 Nyamwamba Valley, near the Trekkers Hostel.
From Uganda's international airport in Entebbe (EBB), it is 30 minutes by bus to the capital Kampala. From there, the big bus companies drive to Kasese by either the south route, via Mbarara, which is approximately 430km and takes about 7 hours, or the north route, via Fort Portal, which is a little shorter with 400km. From Kasese, hire a taxi to the Trekkers Hostel in Kilembe. It's a short stretch, that should take you no more than 15 minutes.

If your plane lands late in the evening, as did mine, you would spend your first night in Kampala. Getting from Kampala to Kilembe in a day should be no problem at all, though I can't speak from experience, as I went to the Virunga Volcanoes first.

Apparently, Kasese Airport is currently being upgraded to an international airport. So in the future, things might get easier. Personally, I thought the bus ride was charming. Bumpy, but charming.

The Trekkers Hostel is where you meet your obligatory guides and porters, and where the trekking starts. Sitting at an altitude of 1450m, it is pleasantly cool. They serve delicious beer and you can spot beautiful chameleons, but the mosquito net in my room had a hole. That was slightly worrying, though they say that the region is malaria-free. (Once in the mountains, by virtue of the altitude, you definitely have nothing to fear.)

Map of the first days of the Kilembe Trail (© RTS). 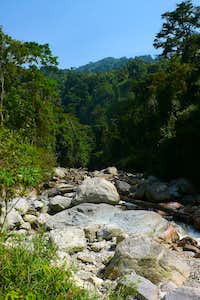 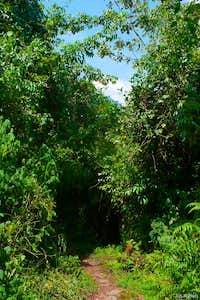 The Mulyambuli River and the deceptively harmless first hour on the Kilembe Trail.
The only practical route to the Mutinda Camp (3688m) is the Kilembe Trail. That takes you all the way to Margherita in six days, with the Mutinda Camp your place for the night at the end of day two. Till there it boasts two steep sections, and crosses all but one of the vegetation zones that the national park has to offer. This is just a hike, be it, once in the bog, a very wet and tricky one. In sharp contrast, the last 300 vertical meters, from the camp to the summit (3975m), really require your hands all the time.

The first hour of day one, going up the Nyamwamba Valley from the hostel (1450m / 09:15) to the Mulyambuli Rangers Post (1727m / 10:15), you are still in cultivated land. But directly after you paid the small fee for the national park and got the half hour long instruction from the ranger, you are in a pristine equatorial rainforest. Now hikers typically go to the Rwenzori for the bog and the glaciers, for the Giant Groundsels and the Giant Lobelias, for the Afromontane scenery and the challenge of bagging Africa's highest fold mountains. They do not go there for the equatorial rainforest. Yet the rainforest is actually very beautiful and impressive in its own right. An hour and a quarter after the rangers post there is a half hour lunch break at an idyllic spot on the Mulyambuli River (12:00). 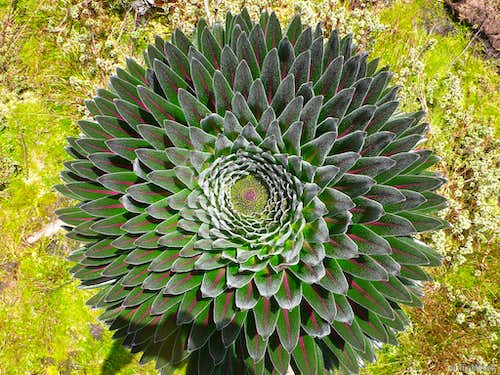 A Giant Lobelia (Lobelia bequaertii) rosette in the heather zone.
Some hour and three quarters after lunch (14:15) you cross the Mulyambuli River at a point where it tumbles down in a series of waterfalls. Up to this point, the track was easy, but now things get serious. The map mentions a steep section, and it isn't kidding. By the time you've reached the Sine Hut (2580m), you know that you've gained a good 1100 vertical meters. The hut is still in the rainforest, and you should have no trouble spotting blue monkeys. This is the only night not spent in a tent.

Day two leads you into the realm of the mammoth plants. First you walk through vaulted cathedrals of Afromontane bamboo. Then you reach the one turf for which the Rwenzori is most noted, or notorious: the bog. It awaits you with giant heather trees covered in moss and old man's beard (Usnea), giant groundsels, giant lobelias, everlasting flowers, and forest ferns of colossal proportions. This gigantism —a product of prodigious rainfall and a warm climate— is unique to Africa’s tropical mountains.

Yet while your eyes are constantly drawn to these alien plants, you still need to really take care where you put your feet, or you will sink knee-deep into the moor.


Around three o'clock the Mutinda Camp is reached. The spot is a little depressing: under a rock, in the shadow of the Mutinda Lookout. But that hardly matters, as you're not going to spend much daytime there anyway. Rather, you just drop off your pack in the tent, drink some tea, and then head off the summit. 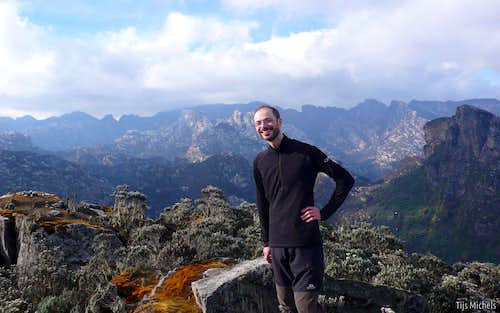 On the summit (3975m), feasting my eyes on the panorama.
The Mutinda Camp is more or less directly below the Mutinda Lookout, meaning that, from there on, the only way is straight up. It is about an hour and a half of pulling yourself from one trunk to the next for the last 300 vertical meters from the camp to the top. In two vertical places near the summit, makeshift ladders help out. Once at the summit, it is immediately obvious, why they call it the Mutinda Lookout, as the views are sweeping and spectacular.

Down again to the Mutinda Camp takes about one hour.

In theory, you could also approach the mountain from the south, walking from Kyarumba, through the Nyamugasani Valley, across the Kirembe Pass (ca. 4000m), along the shores of Lake Kanganyika, round Keki (4114m) and finally turning south-east when stumbling on the Kamusoni River. Kiendler (pp. 218–219) warns for four days of seriously difficult terrain! Experienced guides and porters of either RMS or RTS are not only —as the entire route is within the boundaries of the national park— obligatory, but also essential, as without them, you will most likely miss the few spots near the 'track' where bottles can be filled up. A long and therefore expensive approach.

You are not allowed to go anywhere in the national park without a guide. For the Kilembe Trail, that means, you need to go with Rwenzori Trekking Services (RTS). I was quite impressed with them.

The visum for Uganda can be bought at the airport. Sets you back USD 100.
Officially, they also require a yellow fever vaccination, but in practice, this is not checked. Still, it makes sense to have it.

Let me first stress, that I've only met friendly and easy-going Ugandans. So much so even, that they were able to make an already absolutely wonderful experience even better. Yet, having said so, two points should not go unmentioned.

Bloody tribal clashes returned to the Rwenzori sub-region in July 2014. Sadly, the Kasese District, which contains the trailheads for both the Central Circuit and the Kilembe Trail, also had its fair share of violence. As these trails are proper week-long expeditions, taking you deep into a very remote and inaccessible mountain range, you have nothing to fear once past the trailhead. But you have to get there first, so it can't hurt to check the political situation before buying your ticket.

As most East-African nations, and with near-unanimous support in the population, Uganda has a long tradition of harsh anti-LGBT laws. Imprisonment for seven years is common, for life possible. And even more draconian oppression is being contemplated. In short, LGBTs are strongly advised never to mention, let alone show their orientation. And even heterosexuals should avoid discussions on the topic, as they do not go down well with the local population. 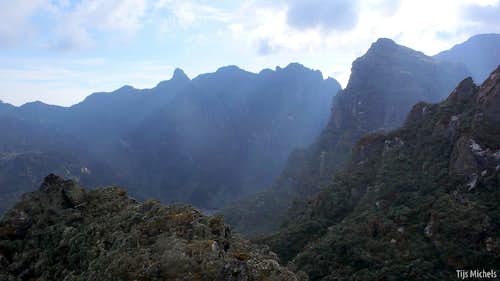 Looking south from the Mutinda Lookout to Rwatamagufa (4260m).
The best months of the year are January (short dry period) and July and August (long dry period). With some luck, June and September are fine as well. Even in the dry period, rain is frequent, often lasting for hours in a row! Blue skies are extremely seldom all year round, though it must be said, that in general the Mutinda Lookout has less atrocious weather than Mt. Stanley.

The current weather forecast can be found here. 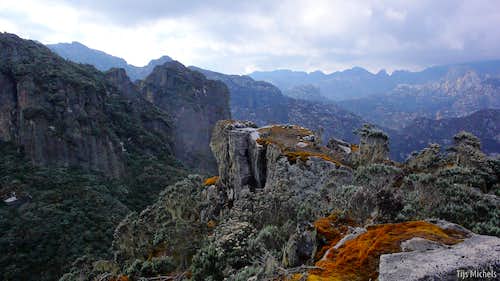 Looking north from the Mutinda Lookout. The high peak in the background to the left is probably Rugendwara (4300m).
Most wear rubber boots, yet outside of the rainy season, gaiters over Gore-Tex boots are an option as well. We were exceptionally lucky with the weather, but normally, rain gear is essential as well.

Once in the bog, things get very unstable, so you will want to use trekking poles. Leave them in the Mutinda Camp, as you need to have your hands free on the final 300 vertical meters, so as to be able to pull yourself from trunk to trunk.

The Kilembe Trail has plenty of reliable sources of drinking water, so you never have to carry more than one liter.

Do not bring a down sleeping bag! Most likely, you will experience rain every day, and if not, it is still extremely humid. In such circumstances, it will not take a down sleeping bag long to lose a good deal of its insulating power. Almost everyone climbing the Mutinda Lookout, will go on to also climb Margherita, in which case a synthetic sleeping bag going to a few degrees below freezing should be fine.

RTS has spacious permanent tents along the entire route, equipped with either bunk beds or just mattresses. So for sleeping, you only need to bring a good sleeping bag. They also provide porters and cooks, making the camping really comfortable.

The best book on Africa's mountains I know of is: Hermann Kiendler, Afrika: die höchsten Berge des Schwarzen Kontinents, Panico Alpinverlag, Köngen 2011, 408pp. The Rwenzori is on pages 146 to 219, with the Kilembe Trail on pages 206 to 208. Unfortunately only in German. Highly recommended.

Rwenzori Trekking Services.
Rwenzori Mountains National Park.
An excellent guide to Africa's mountains. The Rwenzori chapter describes 51 peaks higher than 4000m.
An excellent blog, describing the Kilembe Trail, as well as the Virunga Volcanoes, and Mount Elgon. In short, everything you want to climb in Uganda. Unfortunately in German.