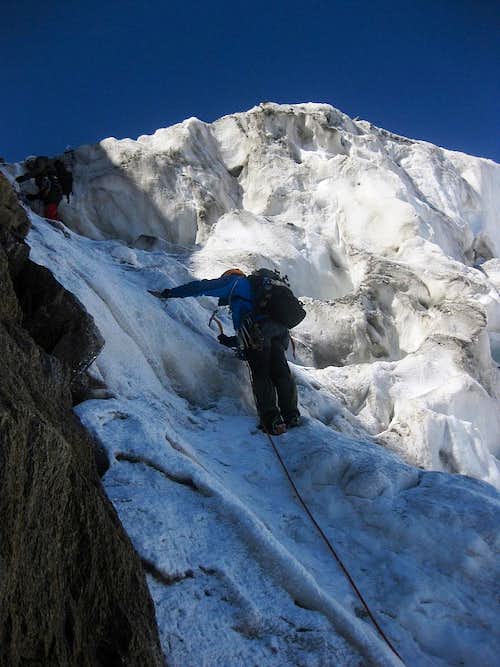 Jeroen climbing the icefall
As we came to the end of a two week mountaineering course early in the summer of 2012, the main event proved to be climbing the Mutmalspitze North face. We had been practicing and climbing, and were ready for this: an alpine route, with 350m of steep ice to the summit ( 3528m). The first 100 or so were through an icefall, above that the ice was pretty smooth, solid but not too hard, and with a thin layer of snow on top.  It turned out to be one of the best days of our two week course!

For various reasons, this route is not climbed often, but if you are up to the challenge and get the chance to climb it in the near future, by all means, take it! We were lucky to find the route in excellent condition. The glacier was cold and hard without much recent snow, and the rockfall hazard around 3200m or so, which can make the climb

It will still be a while before it's gone, but the Mutmalferner, the small glacier high on the north side of the mountain is getting smaller, and when it disappears, so does this route, following the fate of so many other north faces before. Sure, in winter there will still be snow, but that's very different.