The ascent of the North face buttress lasted 17 days.

"It was as difficult as never before".

Twelve days of bad weather and six sunny days. Steep (60-65 degrees) snow-ice slope, then ridge sharp as a knife, from the height of 6500 m – the tower itself: steep ice-covered, snow-covered rocks vertical and overhanging sections, with loose snow on vertical rocks.

The summit is a wind-packed snowdrift without any traces of visits by humans.

The descent route lay across ice cascades, parallel to the ridge. It turned out to be the optimal route. Descent from the summit to the bottom of the mountain lasted 24 hours.

Ascent of the buttress of North-East face required 17 days. Of these, only a week of good weather.
Buttress ascent lasted 17 days, and 1 day of descent - 18 days in total.

А few words about the ascent

What did you leave on the summit?
Nothing, except our trails, our health. We had a short rest and «took to heels» - we had the descent before us. Coldness, bad weather. The photos from the summit are not very fascinating.
But before that was the ascent route. Very strenuous physically, psychologically, meteorologically. 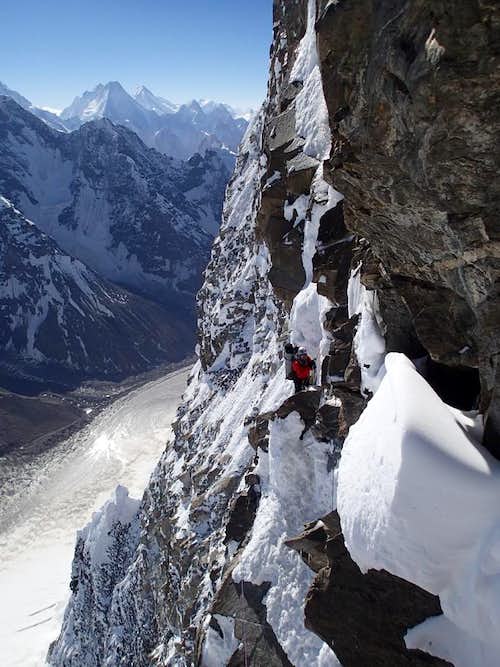 On the eighth of August – time to start the ascent – the weather was bad. On the ninth in the morning the weather improved – we started. In a few hours the weather spoiled again. The clouds dispersed when we approached the rampart. Good weather lasted only one week.

Half of the route is a snow-ice slope, about 60 degrees steep, leading to a steep «saw» which turns into vertical wall at the height 6500.
From time to time avalanches fell upon us. You hang, wait when it covers you, but the avalanche falling from the upper snow slopes on the vertical wall is dispersing in the air, spattering you with snow dust and fear.
When we climbed the ridge and reached the summit, it was unbelievable that the ascent is over, now down, back to home.
The descent was difficult – it snowed heavily, the snow flew down by the ice cascades, got under the hood, under the collar – got inside. In 24 hours we descended from 7000 to 5500m. 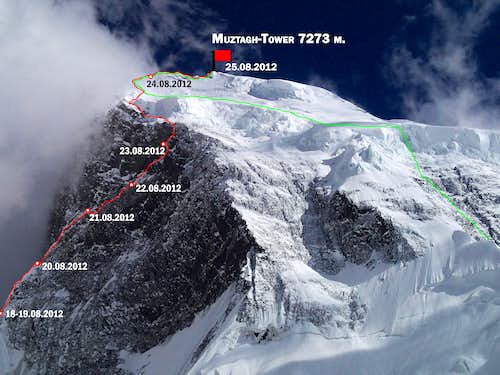 Your group consisted of three, not four climbers; did you feel that a fourth member would be preferable?
On the one side, it would be preferable – in this case we might work by turns, but I cannot even imagine, how we could manage to place two tents…

All the bivouacs were in the tent?
Thank Heaven, all bivouacs were in the tent, all bivouacs in lying position. We had such desire to arrange a good site for bivouac and to sleep horizontally, that we chopped, chiseled…
Did you prepare the route [fix ropes with subsequent descent to bivouac site]?
Only two ropes, not more.
How many ropes you had?
The route consisted of… - I cannot say, how many ropes [pitches]. And we took four ropes – two static and two dynamic ropes. At the end, only three ropes remained – one was badly damaged, we brought it down and gave to the porters. We left nothing on the mountain – brought everything back. Yet, ice-fifis and an ice axe were gone – that is unavoidable.

Gas and foodstuff came to an end when the summit was still ahead; how you managed without food and water?
We looked up – the Sun appears, hence, the ridge is somewhere near: on the Northern side the Sun is always behind the mountain. Foodstuffs and gas came to an end – nothing doing, – the summit must be close. From the very beginning we were somehow sure that we will get down quickly. что спустимся быстро. During descent we sucked snow – it helped, we felt real thirst when came down and it became hot.

Sergey Kotachkov. Coach of the team.
The entire South face is hit by stones. Still in Moscow we planned climbing the North-East face. We arranged the base camp, went out for reconnaissance. We found other marvelous place for BC, but it was impossible to get there with the entire load – experienced porters were necessary. The Slovenes had arranged their АBC in 2008 exactly at this place – our guys found it on the way back from the summit. 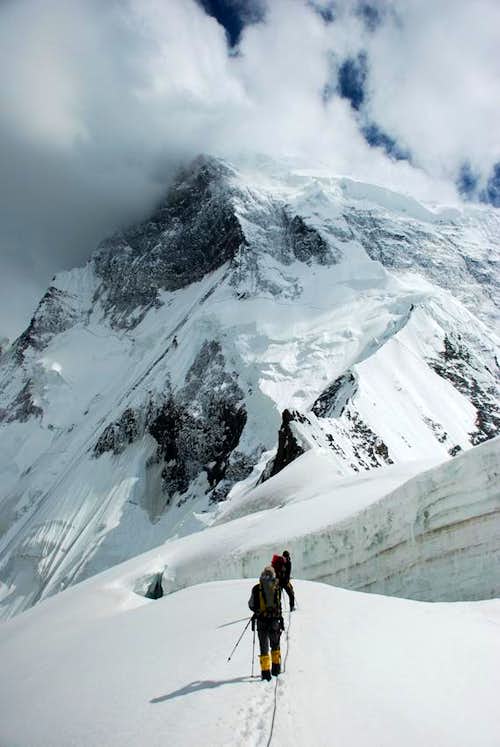 On 09.08.12 the climbers started ascent. They go slowly, carrying a haul bag weighing thirty kilos – no choice. Bad weather – two days spent in the tent. Down at BC it is either snowing or raining. I approached the bottom of the wall on the 16th – the last day of bad weather. Usually the wind is south-western – it passes over the summit, the ridge and blows along the wall. When you come to the glacier, you see how snowy whirlwinds move on the wall two kilometers high, the entire wall is covered with drifty pillars.

On the 17th, good weather was «switched-on». Just in time. It would be worse if the bad weather would catch the lads on the rock rampart. All the time I was in fear: «God save from injury» - it is unclear, what to do in this case. Nobody from the ascent team had experience above 7000m… It was their first high-altitude climb.

The North face is impressing: height difference of two kilometers – the guys started from 5300. When you look up standing near the mountain, the scale is distorted. It seems that the distance from the “saw” to the summit is quite short. When the climbers reached the “saw”, I asked by radio: what is the height? – 6500. Higher the rock wall becomes vertical, the rocks under the ridge are neither ice nor firn snow - just loose northern snow. I tried to advise something – a ledge seemed to be close to them, a traverse leading to the ridge. I wanted them to get to the ridge as soon as possible. It seemed to me that the ridge is quite near. 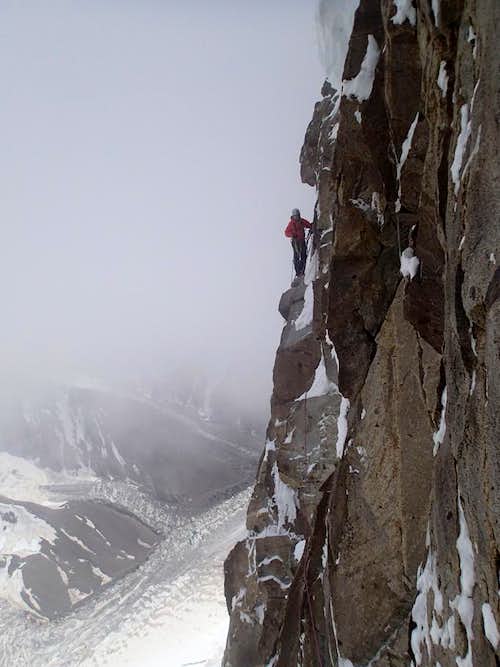 The climbers get stuck in vertical snow and tell about five ropes of distance which they see. I try to count these five ropes – it is impossible due to distorted scaling.

Radio communication: “We consider the option of going to the left, to the French – Eastern ridge”. Everything above the climbers looks steep, while it looks like a small ridge and a depression to the left from them, but it is only an illusion. The character of the terrain is the same. I object categorically: “Absolutely clear, that the way to the left leads to overhanging snows – forget about the existence of the French ridge!” One day before reaching the summit they ran out of foodstuff, the next day they ran out of gas.

On the 23rd the climbers reach the ridge. This means that on the 24th they should reach the summit. The summit is seen from BC – they are still not there. I plan to go to the glacier tomorrow, to ask by radio about the situation…

Supper at 19.30, a call from the mountain: “We are under the summit, at the bivouac!” – “Thanks Heaven…” In the morning they reached the summit and started descent by ice cascades parallel to the northern ridge. They got down in 24 hours.

Congratulations! It would be good to see more photos, especially some from the summit, looking north to K2?

on your SUMMIT.
Greetings from Pakistan.

good job, you guys have done...

Good to see this has been nominated for the Piolet d'Or. Congratulations!