My First Backpack through the Maze District

For spring break in March of 2009, I joined up with a group of 4 college friends to head out to the Maze District of Canyonlands. This was my first backpack for me in southern Utah. We were lucky enough for the winter to be very dry as there was not any snow on the ground and the weather was great. We left Denver and got to Goblin Valley to camp the night. The next day we spent the whole morning getting to the Maze Overlook via the Flint Trail. This was very fun as the roads challenged the Yukon we were in to the maximum. We even had rear lockers and still had some trouble getting back up afterwards on the damp clay roads. Upon arriving at the Maze Overlook I was blown away. I had never seen such a view before and it was at that point I had fallen in love with the deserts of Utah.

We gathered everything together and started the descent down the Maze Overlook route. 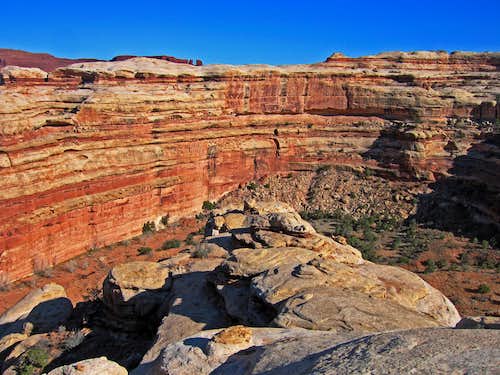 Descending from the Maze Overlook

After making out way into the canyon bottom, we weaved through the canyons below the Chocolate Drops and down past the Harvest Scene petroglyph panel. Since the drive on the dirt roads took so long, we found a place to set up camp. The sun went down quick in these canyons. 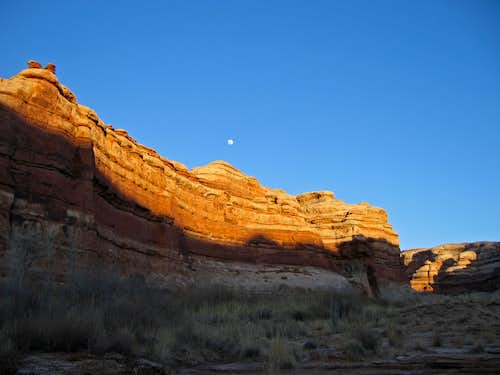 Moonrise from inside the Maze

The next morning we made our way up the Plug Route to Chimney Rock. Upon reaching the ridge we were greeted with an incredible panoramic view, just as beautiful as the Maze Overlook.

Once we arrived at Chimney Rock we took a nice break and enjoyed the views. 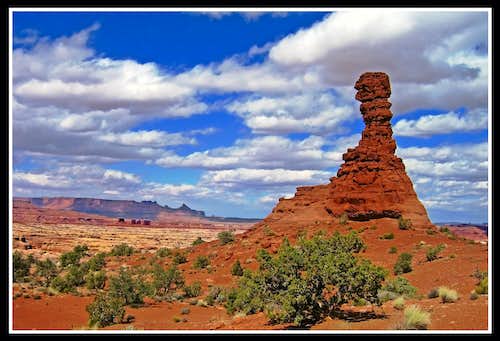 Chimney Rock on a beautiful day 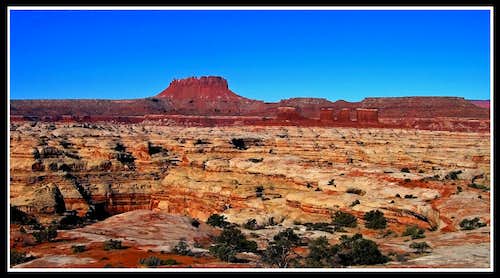 From here we hiked the road to the Dolls House. This was a sandy 3.5 mile hike and we noticed the clouds were building a little but it made for great photos as we approached the Dolls House. 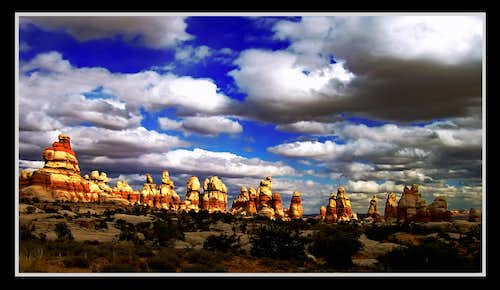 A sun-break over the Dolls House from the sandy road

The Needles District and the Abajo's

Since we were out of water by this point, we had to make the 1200 foot descent down to the Colorado River at Spanish Bottoms. We noticed there was remnants of a very recent fire down there as the entire Spanish Bottoms was covered in ash and no plants were seen anywhere. 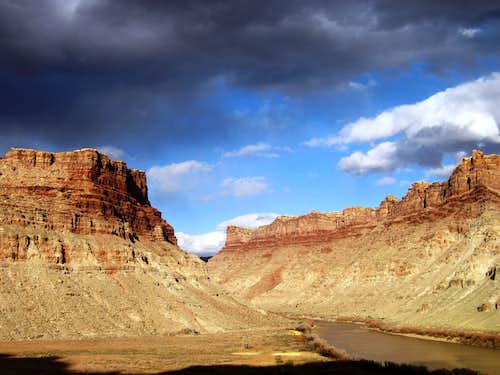 We decided to camp there as it was getting dark however the wind was picking up and this was blowing ash like crazy. The ash was also finding its way through our tents so we had to engineer a way to keep it out which was an interesting task. It rained a little on us that night and the drops froze as it got colder. We didn't know it at the time but high on the orange cliffs this was snow. This would prove difficult for us on our way out. We filled our bottles from the Colorado River and started back up the long trail to the Dolls House. We retraced our steps on the sandy road back to Chimney Rock and was planning on hiking along the Pete's Mesa route. However we took the wrong turn and ended up descending sooner than we anticipated. We ended up going all the way down into Shot canyon before we realized we went the wrong way. We had to backtrack and by the time we returned to Chimney Rock it was nearly dark. We figured we'd hike by the full moon light a ways down Pete's Mesa and set up camp on the ridge since the skies were so clear and the moon so bright. 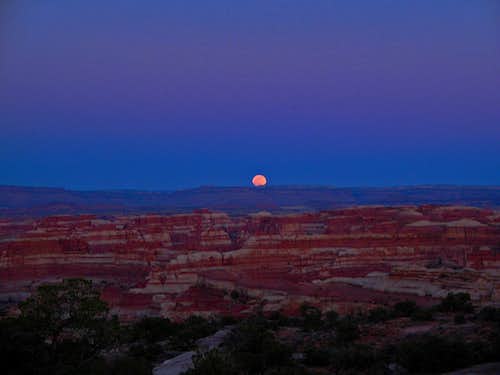 Moon rise over the Maze from Pete's Mesa 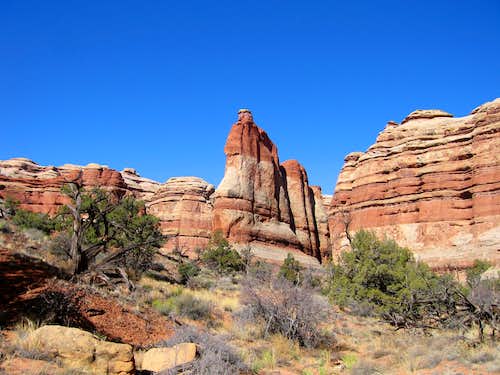 The final home stretch of our hike was the climb back out of the Maze. Since this was my first Utah backpack, I didn't plan this one. I was a follower. Since then, I have planned my trips through Utah unlike anyone else would and enjoy every minute I spend there. See my other Maze trip report about my return to the Maze in May of 2010. This one I planned and we covered much more ground and I was able to get more and better quality photos.