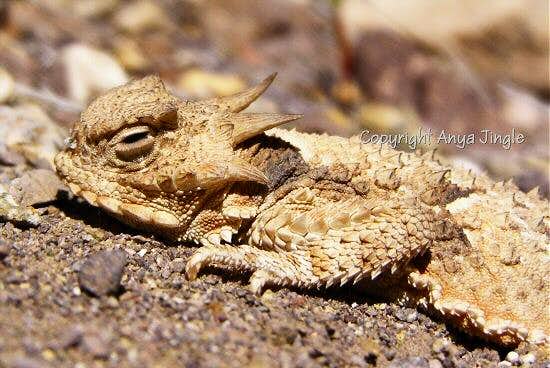 The Southern Desert Horned Lizard (Phrynosoma platyrhinos calidiarum) basking in the sun, encountered en route to Horn Toad Peak (named after him a short while later) and Little Pyramid Peak. Redstone area of Lake Mead NRA, Nevada. Late March 2008. These lizards are often called horn toads. Their diet consists mostly of ants and they often sit by ant hills waiting for their prey to walk by. Besides the Desert Horned Lizard, there are no other species of horned lizards living in southern Nevada.
« PREV NEXT »

Nice shot! You got extra close to this guy, he didn't freak out at all??? He looks pretty relaxed.

Thank you. No, he was pretty slow. Not sure why. Maybe the night was cold and he was just beginning to warm up in the morning sun. Cheers!

This is one of my favorite wildlife shots on SummitPost. Great job!!!

Aww, thank you. This little fellow didn't feel like moving much, so it was easy to get my camera very close. Maybe he just wasn't a morning person, ha,ha.