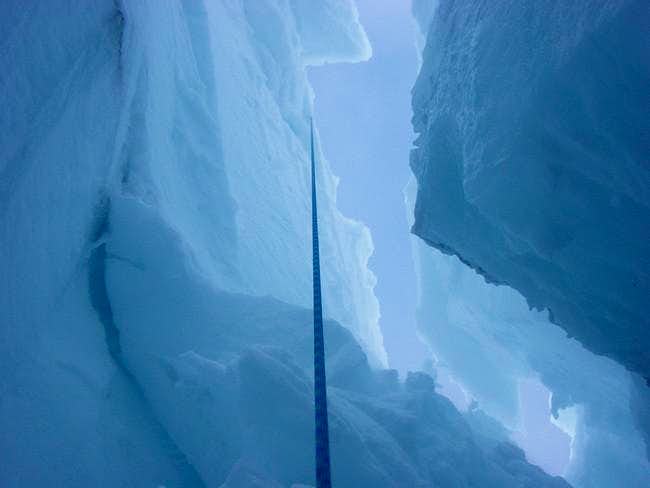 My view after failling 30 feet into a crevasse in the Ingraham Icefall on June 6, 2005. My teammates hauled as I climbed and we made the summit by 11:30am.
« PREV NEXT »

Thanks for the message! Shock will lead you to do some real weird things and fortunately I got a good photo from it. Best of luck on your climb!

I hear you on that one. Hopefully I won't need shock to get some great shots. I've been waiting a long time for this opportunity. 2 days until I fly out. Thanks for the good wishes!

Great Picture. Thanks for sharing with us. I hope I never have to see something like this in person.

How did you not see that monster!?

We had just navigated up and around several seracs and the crevasse ran perpendicular to the slope I was crossing. It was a jumbled mess and I let my guard down for a moment after seeing a nice flat rest stop for our team about 150 yards ahead. The snow broke on an small angle that had footprints from an earlier party. The entire crevasse was covered except for the downhill section that I couldn't see because of the angle to the left. Fortunately, the second member of the team saw me drop and sank his axe immediately, but was still dragged quite a distance toward the crevasse. He rules!