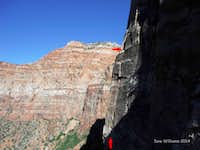 2nd-3rd Pitches
The Watchman is an alluring objective from town (Springdale) but in reality gets climbed less than just about any peak in the park. Its best-quality route is only three pitches long (Chastity Crack, 5.11) and it is a hump (1hr+) via sheep trail on loose sand and through brush to get to the base of it. To the right of Chastity is a taller older route named Mythical Kings and Iguanas. Brian Smoot and Bill Robbins established this line in 1985 (22 years prior to Chastity) but it has seen a handful of ascents at best. The name comes from an equally obscure song released in 1971 by Dory Previn. 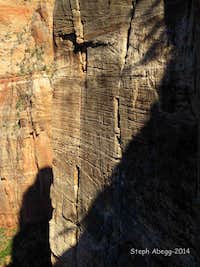 2nd Pitch as viewed from the N. Ridge
I actually got off route on this climb which is hard to do, but I was not paying attention. I noticed the more prominent off-width chimney feature to the right on approach and did not get my notes back out to evaluate once I reached the wall. I started up just one meter too far to the right (sort of a twin crack system) and ended up engaged on the second pitch in a huge chimney/off-width feature. After trying to tunnel my way through for 20 minutes, it became obvious we were off route. We were not the only ones to leave tat behind on this side of the proper start. We rapped and started over. The left side of this twin crack system is much cleaner. The first pitch runs up a hand crack to a small bush and into the base of the short off-width section at the start of the second pitch. Both of these pitches are rated 5.10 in the guide but are quite soft for the grade by Zion standards. Climb the short off-width which quickly turns into the best pitch of the day via a hand splitter in decent rock. If I climbed this route again, I would do it with a 70m single and combine the second and third pitches to a comfortable bolted belay. The fourth pitch is the second best pitch of the day with varied and thoughtful climbing up the left facing corner. The 5th and 6th pitches can be combined with some rope drag. The start of the 5th pitch offers some stout 5.8 off-width that continues up the same corner and can be protected with a C4#6. 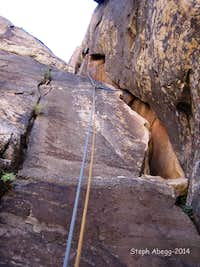 4th Pitch
Approach involves approximately a 1000'+/- in gain. Park at the visitor center and walk across the street to a large parking lot full of the trams used during tourist season to haul folks down canyon. When you come to a pedestrian bridge that leads to a maintenance building, drop down into the wash on the right below the bridge. Head southwest towards the backside corner of the Watchman. Stay in the wash until you come to a significant gully on your right. Bushwhack up this gully on very loose ground. Make your way out of the gully and to the soft slopes on the left whenever the brush relents enough to do so. Walking up the left side of the gully through sporadic bush is more pleasant than up the gully or anywhere on the right side of the gully based on our first-hand experience. As you approach the north face of the Watchman you will see an obvious crack running up the middle of the north face just 100’ or so to the left of the north ridge. Take the left side of this system. Avoid the big chimney up and right. You are pretty much following the same crack system up three pitches of splitter type terrain and then it continues up two more pitches making up a left facing corner and one junk pitch at the end to intersect with the north ridge.

Steph Abegg, my partner and photographer for this climb, did an outstanding job on this topo pic displaying the route as well as writing up a detailed trip report on her blog site.

1st Pitch- 160’- 5.10/ These first two 5.10 pitches are relatively soft for the grade by Zion standards. Climb the left side of the obvious twin crack system in the middle of the north face just left of the north ridge. The right side goes as well, but leads to a large chimney/off width problem too far right (trust me I have done it). The left side is mostly hands for the first half and eases off through blocky and loose terrain overcoming a bush to reach the base of the off-width portion of the next pitch (belay takes C4 #3’s and #4’s.

2nd Pitch- 110’- 5.10/ If I did it again, I would combine these 2nd and 3rd pitches with a 70m. The 3rd pitch is relatively easy climbing and leads to a nice bolted belay on a comfortable ledge. The start of the 2nd pitch is the crux of the route, a short section of off-width that would be rated 5.9 compared to many other off-width pitches in Zion. I protected it with one C4#5.  Fairly immediate you enter a nice hand splitter which offers the best rock and climbing en route. You can stop in the pod as referenced in the guidebook or combine this pitch with the next pitch with a 70m rope or a short bit of simul climbing.

3rd Pitch- 100’- 5.8/ The rock deteriorates quite a bit on this pitch even though it is basically a continuation of pitch 3. But it is easier climbing through large features to a decent sized ledge with two rap rings located dead center between two corners above.

4th Pitch- 110’- 5.8/ This pitch is the best and most sustained 5.8 pitch. Climb up the right side corner (left facing) on decent rock (in comparison) with a variety of climbing techniques including stemming. Towards the end (next ledge up) is the thoughtful crux that protects well with a small piece and a C4#.75. Pull onto a similar ledge as below with one fixed bolt and a small C4# .4 pod up and left.

5th/6th Pitches- 200’- 5.8/ The only 5.8 portion is the initial off-width up the right side (left facing corner still). I bumped a C4#6 here but would not hesitate soloing it. A C4#5 won’t fit. Once through it, just scramble up and trend right on loose ground following easy cracks to the right shoulder. A large tree awaits to belay off of. Rope drag was a bitch I admit.

Locate a tree (down one level from where we topped out) right at the edge of an overhang rap line. Rap the tree with a single 70m rope to a large ledge below. Hike down and to the far right and locate a gully you can down climb. If you try and rap with doubles down the notch back to the north ridge, more than likely your knot will not pull. Down the gully and locate a slung (2014) tree. Rap down this tree with a 70m rope to the eastern edge of the north ridge to located a double rope rap off a tree that returns you to the base of the route.  I recommend you take some cord and make this two single rope raps via trees.

Single 70m rope if you follow my suggestion on the descent.  Extra webbing, as of 2014 all existing rap stations are good though. Double rack to C4#4. I used double 3’s and 4’s on the first pitch and setting up my anchor on same. Only time I needed two each. One C4# 6 is much more helpful than a #5. Protects the off-width sections on pitches 2 and 5. The #5 won’t protect the 5th pitch OW. I placed a #0 once. Can’t remember placing double C4#.3 ever. Took and placed no wires. Used a few small off-set cams here and there. Helmet is mandatory. As chossy as any remote route in Zion. True north facing, we were in shade all day on the ascent in August, temps were nice. Poles a must for the approach, loose and sandy ground.