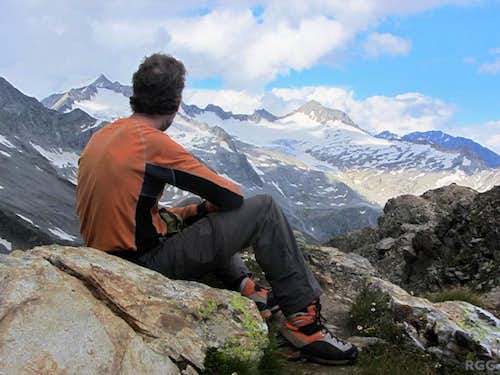 Enjoying the summit views to Großer Möseler (3480m) and Turnerkamp (3420m)
The Eisbruggjoch (2545m) is the scenic home of the old and rustic Edelrauthütte, also known as Eisbruggjochhütte. Complementing the nice location, the staff is real friendly and helpful, and the food good and plentiful, making it a fine base for a few days while exploring the surrounding mountains. The two highest peaks in the Zillertal Alps, Hochfeiler and Großer Möseler, can both be climbed from there in a full day. Hoher Weißzint offers a shorter day, but slightly harder scramble.

However, the one that gets visited most is not one of the main peaks, but Napfspitz / Cima Cadini. The primary reason? Well, if you're in good shape it takes just an hour from the saddle to the summit. Consequently, hikers that arrive early enough at the hut still have time to bag the Napfspitz and get back down in time for dinner. And though it's not quite as high as the aforementioned peaks, it still commands fine summit views.

The Eisbruggjoch is the key saddle, giving the mountain a prominence of 343 m.
All geographical names are given in German, since that's the first language for most people in this part of Italy. The Italian names are given in a separate table to keep the description readable. 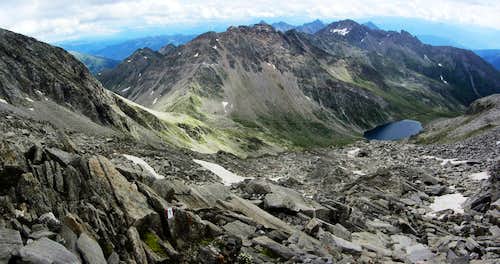 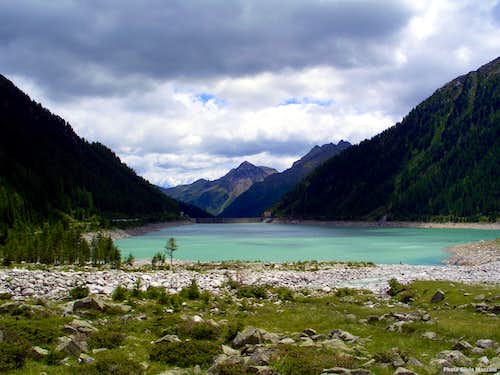 Neves lake
The nearest train station is in Bruneck, a small city in the Pustertal, with a lively and scenic old center. Plenty of buses head north towards the Ahrntal and Mühlwalder Tal.

The nearest trailhead is at the Neves Stausee (1856m) (46.94147°N / 11.78700°E). This lake is located at the end of the Mühlwalder Tal, just above the village of Lappach (1439m), which is as far as you can get by bus. With private transport you can drive up to the lake (the last part is a toll road). Alternatively you can leave your car at the parking area right before the toll booth and walk the last part to the lake, following the hiking trail in the valley floor. From the west side of the lake, a well maintained trail ascends the Pfeifholdertal to the Eisbruggjoch.


A slightly longer hike is the approach from the Pfunderertal. Instead of Bruneck, the nearest train station for this trailhead is Niedervintl (755m), also in the Pustertal, at the entrance to the Pfunderertal. The last bus stop in that valley is just past Pfunders, at about 1225m. By car you can get deeper into the valley. There are a couple of parking areas near the end of the road, at the hamlet of Dun. If there is room, you can park at the highest one (46.91775°N / 11.68810°E) at about 1550 m. Trail 13, initially following the Pfundererbach, leads from there to the Eisbruggjoch.

Special mention deserves the Pfunderer Höhenweg, a long distance hiking trail from the town of Sterzing to Pfalzen, a small village in the Pustertal just west of Bruneck. From Sterzing, it's three to four days to the Eisbruggjoch.

From the Eisbruggjoch, a steep, rough trail ascends the NNW ridge. There are markers, but it's easy to get off trail accidentally; I did just that on the descent. At about 2855 m, not far below the summit, the trail reaches an unremarkable high saddle, which is a sort of crossroads of trails.

To the northeast, the shortest trail doesn't go much further or higher, and ends in less than 50 m on the Pfeifholderspitz (2862m). To the southwest another short one reaches the Napfspitz after about 300 m. It's 1-1.5 hours from the Eisbruggjoch, a good three hours from the Neves Stausee, or closer to four when starting from the booth before the toll road. If you arrive by bus in Lappach, count on another half hour.

A fine alternative route starts at Zösen (±1700m), a few scattered houses and farms just west of Lappach. There is no proper parking lot at the trailhead (46.91867°N / 11.77554°E), but you can park by the side of the road. Or have some refreshments at the Bergmeisteralm, 500 m before the trailhead, and ask if you can leave your car there.

The fairly steep trail (nr 6) starts out to the west, but soon turns northwest. Shortly above 2300 m it gets less steep, and around 2425 m it passes the Seeberg lakes that occupy a high cirque, surrounded by the Eisbruggspitz (2787m) to the west, Seebergl (2705m) to the east and Napfspitz to the northwest.

Past the lakes it gets real steep again as the trail ascends the southeastern flanks of the Napfspitz, to the aforementioned trail junction next to the Pfeifholderspitz, 300 m from the Napfspitz summit. It's about 3.5 hours from the Zösen trailhead.


As a day hike, the two routes can be combined into a circuit. 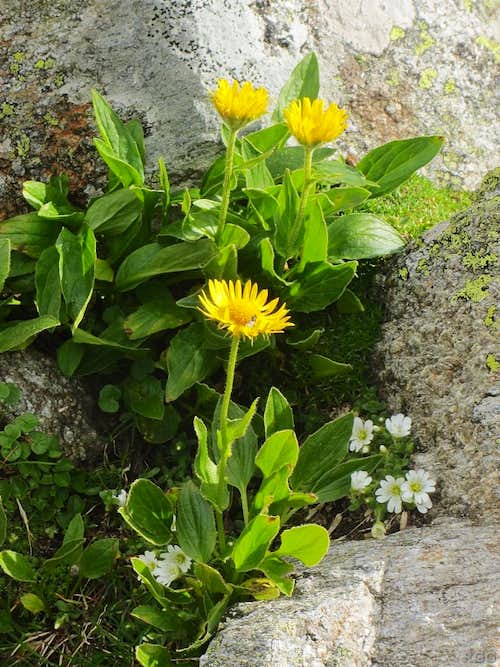 Doronicum growing on the slopes of the Napfspitz 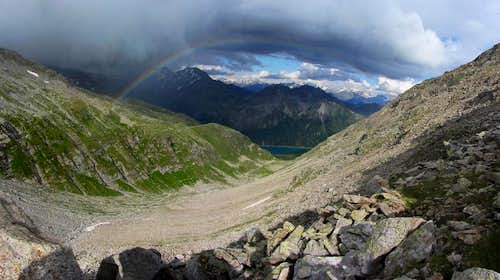 Rainbow over the Pfeifholdertal, seen from the Napfspitz NNW ridge
Best from late spring to well into fall, when there isn't too much snow. 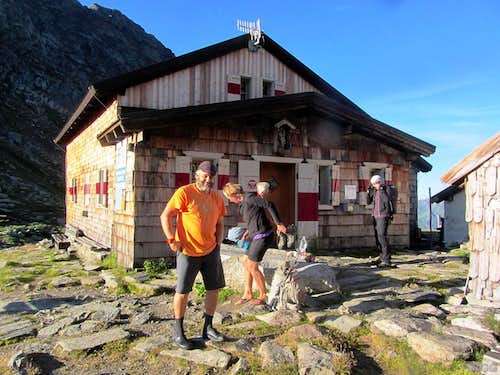