A couple weeks ago I was searching through my peak lists and topos looking for some nice lines near the front range that I hadn't seen skied lately and I came across this photo on Summitpost: 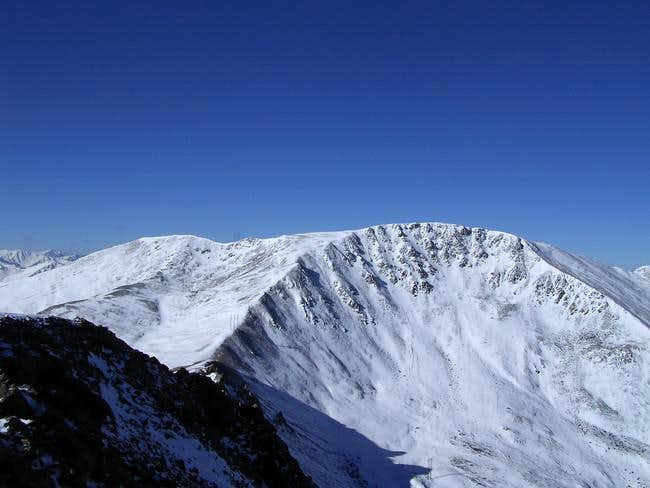 Taken in October, I figured these lines might fill in pretty nice, so on our outing to Squaretop last Friday, I got a nice view of the NE face of Argentine and it was looking prime to be skied with multiple lines of varying dificulties, but definitely skiable. So, we made plans to hit up the NE face soon.

Well, soon turned out to be yesterday, and a beautiful day it was. We camped out below Guanella Pass on the road Friday night, leaving one car at the base of the Leavenworth Road, in case we took the 6 mile road down from the Waldorf Mine. We awoke at 4:45, geared up, ate a bit of grub, and were on our way shortly after 5am. Light was coming in fast, and we didn't need our headlamps anymore soon after we began our skin up the road towards Naylor Lake. The clear night had frozen the snow pack well, but we knew it would be soft and wet early.

Our goal off in the distance

On the way up we saw what I believe was either a rather large coyote or a wolf on the slopes of Wilcox. I'm pretty sure it was not a cat, but it was big for a coyote, but I didn't get a good close view. We did see some tracks which might have been this animal, but the paw prints were about 3" long which seems big for a coyote. I couldn't tell if they were cat or dog family for certain, because the pads weren't 100% discernible (If they were cat it could easily have been mountain lion prints). We did find signs of a scuffle and lots of ripped up hair on the ground at one point - we were guessing an animal (maybe the one we saw) got some critter for food - who knows. I wish the tracks would have been more clear.

A photo of the animal. This was zoomed in from across the valley, maybe a half mile.

The scuffle. There were many prints of what looked like two different animals converging on this spot:

The remains of something (marmot perhaps?):

Climbing up the drainage went quickly and soon we were at the saddle between Wilcox and Argentine with our first close up views of the face and the basin below. We debated which lines to hit and whether we should climb back to the saddle or ski out the basin. The route out of the basin looked flat and possibly a pain in the ass, but we kept our options open. As for the lines, it looked like there might be cornices protecting the lines lookers right of the summit, but one line nearly direct off the summit looked good as well as one more lookers left of the summit. We continued skinning up the ridge and claimed the summit at roughly 9:30, skinning from the car to summit in just over 4 hours.

The lines on the NE face. We skied the one just to looker's right of what appears to be the highest point:

A view down the couloir skier's right of the one we skied:

Approaching the summit, Squaretop in the background:

Some scenics from the summit:

Breck and the south end of the ten mile

A quick break and discussion of lines and escape from the basin, and we opted out of the 50+ degree lines to skier's left with small but imposing cornices likely requiring some air followed by committing turns above rocks and chose to hit the line that was just skiers right of the summit with a 40+ degree entrance and no cornice.

The chute was wide for the first few hundred feet, but choked down to some narrower shots to exit into the apron. The snow was perfect - nice corn top layer with some sloughing, but quite manageable. The steepness abated pretty quickly to mid-30's. The narrow rock chutes were a lot of fun, with gahugafuga and I taking different routes through here.

This is a view up the shoot looker's left of our line, we came in from the right"

I stopped near the middle of the apron and waited for gahugafuga to arrive. I'd noticed that we were just below the elevation of the saddle and suggested we traverse over and ski back into the basin we'd come up. gahugafuga agreed this would be the best option and we began our traverse. I was tempted to ski the rest of the apron with some of the best spring corn I've been on, but I knew we'd hit some more on the way back to the car. At this point it was getting downright hot so we shed layers and made good time back to the car, just over 6 hours roundtrip. An awesome line on a beautiful day.

The traverse back to the saddle:

Some shots from the ski back:

A parting shot of Evans/Bierstadt with the Sawtooth between. I looked at Bierstadt wondering how MSBC and goldenboy had found a good line down earlier in the week - looks pretty thin:

Good one guys! Sorry I missed it.