Neahkahnie Mountain south of Cannon Beach and north of Mazanita in Oregon, is an extremely popular hiking destination on the north Oregon Coast.  According to peakbagger.com Neahkahnie Mountain has two summit Neahkahnie, the northern higher summit and the slightly shorter Neahkahnie South . The north is the taller one but is off trail and requires a thick bushwack to the summit to what is at best spotty views. List of John.com refer to this northern peak as Pt. 1700 and refers to the south peak as the only Neahkahnie Mountain. From the very few descriptions I have seen of that summit unless you are solely a peakbagger you probably will want to pass on this peak. I will probably explore it sometime in the future but from the information I have gathered that peak is not very desirable to summit. This page will be solely dedicated to the south peak since it the most famous and more desirable summit of the two. 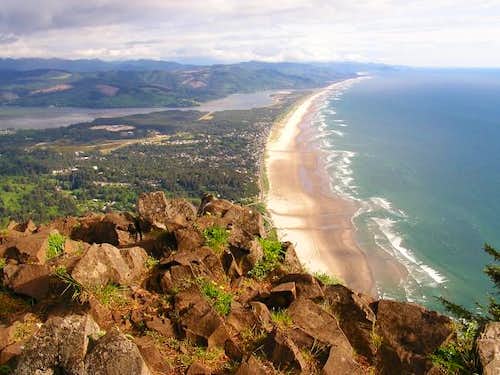 Rocky summit over the beach...
The spectacular and dramatic view from the south peak is what makes this peak so famous. The purpose of do this peak is not because of the prominence because at 350 feet this peak isn't very prominent. Nor do you hike this peak from it's elevation because at under 1700 feet, it is hardly a very tall mountain. The signature view is what sets Neahkahnie Mountain from every other mountain in the region. This quote from BSPclimber, the original person to submit this page "According to Coastal Indian legend, Neah-Kah-Nie Mountain is seen as a sleeping warrior, waiting to be awakened. They thought it was a viewpoint fit for the gods, so they named it Ne (place of) Ekahni (supreme deity)(per Sullivan's guide). I certainly concur about the view from the summit, which on a sunny day is an awesome sight, especially of the Nehalem River valley to the south." You will see this view from almost every known Oregon tourist magazine and none of these magazines can do this peak justice. Don't waste your time and hike this peak in the rain and on a foggy day because honestly you are wasting your time and there are plenty of other places to go that are taller, more prominent and have less views then this magical peak. It is really that special of a view.

It should be noted that the south peak Neahkahnie Mountain is home to three summit area. The eastern summit area by the radio tower is the least visited view point on the peak. The middle summit area is noted on Peakbagger.com as the highest point on the ridge. It does contain the excellent and legendary view to the south from Neahkahnie Mountain. The first issue is that is much more exposed than the west summit and that though it is marked on Peakbagger as the highest, it doesn't feel like the highest and doesn't receive the same amount of traffic as the western summit area. The path from the west is Class 2 but do use caution on it because the drop-off to the west is very intense. The western summit is where most the hikers stop at. The view from this summit is clearly the stand out of the three and when you are on it appears to be the tallest though the according to Peakbagger.com it is not. The western peak is also just Class 2 from the eastern side. It is also is exposed but not as much as the middle peak. Both trailheads are reached by accessing Highway 101. The west trailhead parking is about 11 miles south of Cannon Beach, just south of milepost 40, on the west side of the highway. The trail starts across the highway. There is space for several cars here.
The south trailhead is about a mile and a half south of the west one, between mileposts 41 and 42, not quite 2 miles north of Manzinita. There is a brown hiking sign pointing to the road you need to take, which will be a left turn if you are coming from Cannon Beach. It is about 4 tenths of a mile to the trailhead, which has room for maybe 5-7 cars, although you could park farther down if all the spots were taken.

No red tape or parking passes required at the trailheads.

Since this is a dayhike that shouldn't take you more than a few hours and there are very few bivy spots here. There was at one time a camping spot in Oswald West State Park but this spot has since been taken off the website and they claim on the site that there is no more camping. The towns of Cannon Beach and Seaside also other good camping areas as well along with lodging and resorts as well.

The south peak of Neahkahnie Mountain can be done during all times of the year. The trail is very muddy in winter and early spring and the scrambles can be hazardous in the snow. One thing as I noted in the overview is that if it raining and foggy pass on this peak. If you go up you are really wasting your time on this mountain. There are other summits that are more suited for rainy days.

This peak is so popular it has a Yelp Page