Ampato, Sabancaya and Hualca Hualca
In other parts of the world, at an elevation of about 5260m, Nevado Chucura might be mistaken for a big peak. In the Arequipa district in southern Peru, it's only a minor one, but with great views. Less than 40 km to the west, the high peaks of Ampato (6288m), Sabancaya (5976m) and Hualca Hualca (6025m) attract much more attention. And just 2 km to the northeast lies its bigger neighbor Nevado Huarancante (5426m). 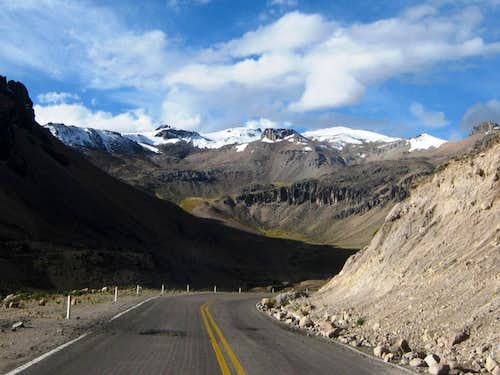 Nevado Chucura from the road in Quebrada Chucura. The summit is the snowy peak just right of center.
Somewhere in the distant past, things must have looked quite different: the gentle ridges that shape the mountain these days, are in fact the remains of an old blown out volcano.

The mountain is close to the main road between Arequipa and Chivay. You can see it up close from where the road crosses Quebrada Chucura, the valley southwest of the summit. There are a few simple huts near the road, a bit further downstream in the valley, and you stand a good chance of seeing alpacas or llamas wandering about.

The prominence of Nevado Chucura is pretty small: to the east, the ridge drops to about 5200m, before rising again to a peak of around 5310m, which marks the start of the south ridge of Huarancante. Still, Nevado Chucura can be seen from the road at Quebrada Chucura, but Point 5310 cannot, which, perhaps, is why Chucura has a name of its own.


Note: Since Nevado Chucura is very close to Nevado Huarancante, a lot of information for the two peaks is the same. I chose to repeat it here, so the Chucura page can be used independently.

Arequipa is the nearest airport, with many daily connections with Lima and a few with other Peruvian airports. In addition, several companies offer long distance bus transport. A lot cheaper, but more time consuming. I flew into Arequipa from Lima, and later I departed on a night bus to Cuzco. 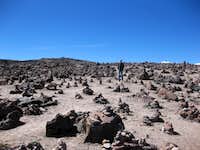 Millions of cairns at the Mirador de los volcanes
Considering the location of the main road, the most obvious and easiest approach starts at the Mirador de los volcanes. To get there from Arequipa takes 2.5 to 3 hours by bus. Plenty of public buses cover the route, and in addition all the tourist buses (and there are lots of those as well) heading for Colca Canyon go there too. I paid 10 soles for my bus ticket plus 1 sol for a surprise tax that I didn't quite understand. Never mind, it's still very cheap.

From Chivay to the Mirador de los volcanes takes the better part of an hour by public bus, depending on the engine - the bus has to climb 1200m or so, up a long and winding road. Going down takes just half an hour.

For the ascent, the easiest route starts at the Mirador de los Volcanes. It's about 350m elevation gain. From the Mirador, Nevado Chucura cannot be seen very well. On a direct line, the summit is about 5km ENE, but to avoid having to descend a bit along the way, start off by hiking up the gentle slope to the northeast, heading 40°. 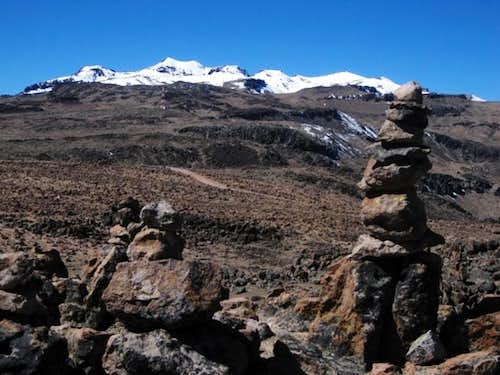 A few minutes from the Mirador you get to see Nevado Chucuru, right of center. On the left, and further away, is Nevado Huarancante. Look closely, and you'll make out the telecom tower. Easier to spot is the winding dirt road just ahead.
After only a few minutes you get the first good views of the mountain. There is a big cairn on top of the hill, but there are lots and lots of other cairns all over the place, so I noticed this bigger one only when I was almost on top of it. 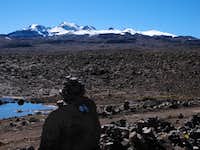 The dirt road at the turnoff NW of the Mirador

The telecom tower
From the cairn, head for the telecom tower visible in the distance. (-15.7446,-71.5649), about 2km NNE of the Mirador. You can either follow the road or go straight for the tower - the road is longer, but easier going.

If you have your own transport, you can actually drive as far as the tower. There are two turnoffs from the main road that can get you there. One is about 2km NW of the Mirador (-15.7564,-71.5752), heading east, the other one is about 1 km SE of the Mirador (-15.7388,-71.5918), heading north. On my first encounter with the area, I camped just northwest of Chucura. I hiked out along this road for a bit and it was in good shape. You might even be able to drive it with a regular car, but a 4x4 would be a safer bet. The tower is already visible at the turnoff. I can't vouch for the condition of the other road. No matter which one of these two you take, soon you'll reach a junction with a smaller road leading to the tower itself. 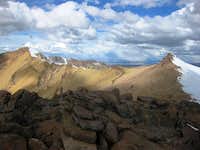 View towards the tower from the summit of Chucura - enlarge for a better view
From the tower, you can see the summit, about 3km away. At this point, I took a big detour, so I don't know the route to the summit firsthand from here, but I could see that the terrain was easy: Go east, heading 80°, and aim for the NW ridge. When you reach the ridge, follow it to the summit. There are a few rocky false summits, which you can easily bypass on the south side, or just scramble over them. On my descent, I scrambled over the last false summit west of the real one.

Slightly over 1km east of Chucura, and connectedby a wide ridge, is an unnamed summit, ca. 5310m. There was one place along this ridge where I used my hands for a short and easy scramble. You can get to Pt 5310 by descending Nevado Huarancante along its south ridge.

The big rocky foresummit from the west
Measured by distance, the shortest route starts at the roadside in Quebrada Chucura (-15.755,-71.551), a few km east of the Mirador. For a while, there is an unmarked trail to follow on the western slopes of the valley. Where the trail gets a bit vague, there are a few cairns. When you get higher, you have to go around the big rocky foresummit, which is easy on the western side. Past it, head straight for the summit, which is marked by a very big cairn. For the descent, this is the easiest route. The total elevation difference is around 550m. 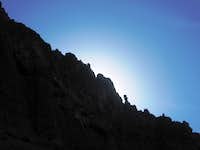 The NW ridge from Huanta Occo
If you're already acclimatized, climbing Chucura won't take more than a few hours. With more time, it can be combined with Nevado Huarancante. With only a day pack, you can climb both in one long day. With two days, you can camp in Quebrada Huanta Occo (a short first day) or somewhere north of Huarancante, and make a grand traverse of Huarancante, Pt 5310 and Chucura on the second day. A really enjoyable trip!

The GPX-file attached to the page displays a multi-day trip, ending with this traverse. See the Routes chapter of Nevado Huarancante for an embedded map. 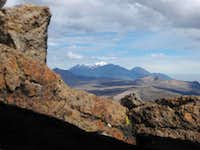 There are lots of hotels in Chivay and Arequipa. Between treks and climbs, I stayed in Casa de Melgar, a nice midrange hotel in the center of Arequipa. 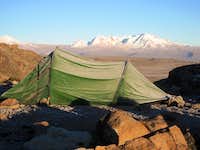 Rime on my tent, NW of Chucura
All around the mountain you can camp wild. A good spot is in Quebrada Huanta Occo, the valley between Chucura and Huarancante. However, well into the dry season, water might be a problem. Best to ask around in Arequipa - see external links.

In Arequipa, the best place I found for buying supplies was the big Plaza Vea supermarket at Avenida La Marina 300. Chivay has a well stocked open market in the town center.

Chucura is low enough to be safe to go all year round. Temperatures usually drop below freezing at night, but as soon as the sun comes out it's not really cold anymore. Peru being close to the equator, it's not much colder in the dry winter months of June thru August. If you have a choice, you might want to avoid the rainy season, from December to March. That said, with snow on it, the mountain is a lot more interesting, so the ideal time would be during a dry period in, or just after the rainy season, or after an unseasonal bit of snowfall later on.


Weather in Chivay
Note: At just over 3600m, Chivay lies much lower than Nevado Chucura. 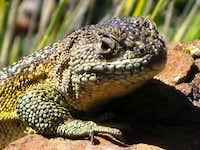 Lizard in Quebrada Achacullo, NE of Chucura
It's an easy hiking peak, and usually no special gear is needed. In the wet season there may be snow and you might need crampons - snow shoes or skies would be fine too. Normally there is no snow anymore in the dry season. I was lucky, because the wet season had seen unusual amounts of precipitation and there still was some left, which, in my opinion, makes all mountains look better. I carried crampons, but the snow was soft enough so I didn't need them.

Frankly, there are no good maps of the area. The best one in existence is the Peruvian IGN sheet 2539 Chivay, 1:100 000.
The small print on the map says that it's based on aerial stereophotography from 1955, but during my time in the area I found that I could trust the geographical features, notably the relative altitudes of the valleys, ridges and peaks, as denoted by the contours, very well. As for human-made features like roads? Well, that's a totally different matter. I learned not to trust the map on that point.

The two agencies where I dropped in from time to time and got useful information about the area: