This is a dynamic page collecting backcountry skiing trip reports in New Mexico, USA. Please attach your own trip reports to this page, and I will try to keep the table below updated (send a PM for faster service). Please also attach your favorite images.

New Mexico has several mountain ranges with backcountry skiing opportunities and potential, with elevations of interest ranging from ~9000' at trailheads to over 13000' at the highest summits. These include the Sangre de Cristo, Jemez Mountains, Tusas Mountains (Brazos & Cumbres Pass area), Sierra Blanca Range, Gila Wilderness mountains, Sandia Mountains, and Mount Taylor. Most of these mountains rise many thousands of feet above high plateaus situated at ~4000' in the south to ~7000' in the north. The high peaks of the Sangre de Cristos offer significant terrain above treeline. The climate is dry, and typically there are periods of sunny weather in between moderate dumps of incredibly dry powder. In a typical year, it is possible to do serious (read: really worth your while) backcountry skiing as early as December and as late as June in the higher, northern ranges. Conditions are much more variable in the lower, southern ranges with a much shorter season, and sometimes none at all.

The two most popular areas are both in the Sangre de Cristo Mountains, in the terrain & peaks around Ski Santa Fe (also click here) and the Williams Lake basin (in the Wheeler Peak Wilderness) near Taos Ski Valley. The popularity of these areas is largely due to their exceptionally easy access combined with the excellence (length, steepness) and variety (chutes, bowls, trees) of the terrain. There are many trip reports in the table below on these two areas. Despite these being the most popular areas, this is (after all) a state with a very low population density, and only on fair weather spring weekends might you run into other parties. The northern Pecos and the Latir Wilderness areas also have some great backcountry skiing terrain, but access is generally much more difficult and time-consuming. 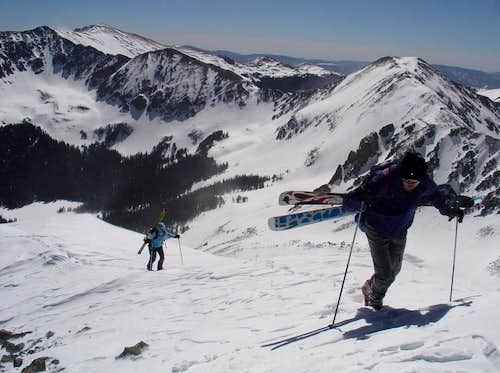 Just steps from the summit of Lake Fork Peak (12881') in the Wheeler Peak Wilderness. 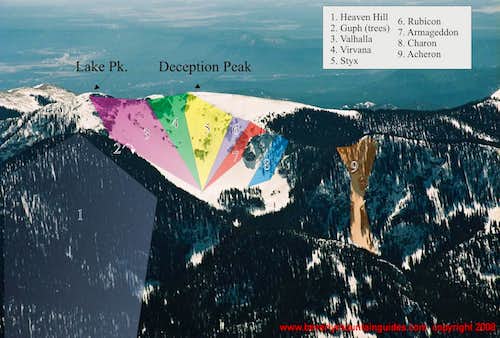 Much of the best backcountry skiing in New Mexico is located amidst avalanche terrain. The continental snowpack means relatively cold, shallow snowpacks with the likelihood of persistent buried weak layers due to depth hoar. Predictably stable conditions are generally found only during the freeze-thaw cycles from mid-to-late spring (pop that beer by noon). Because there is no formal avalanche forecasting service in New Mexico, the Northern New Mexico Avalanche Exchange (NNMAE) is a great resource for northern NM backcountry skiers. It has a forum where people can find partners, and it has a snow reports section where people record their snowpack and stability observations. Please take avalanche hazard seriously, and take a level 1 avalanche course before you venture into the backcountry. The NNMAE website typically lists the avalanche courses being offered locally every season.

Table of trip reports and albums