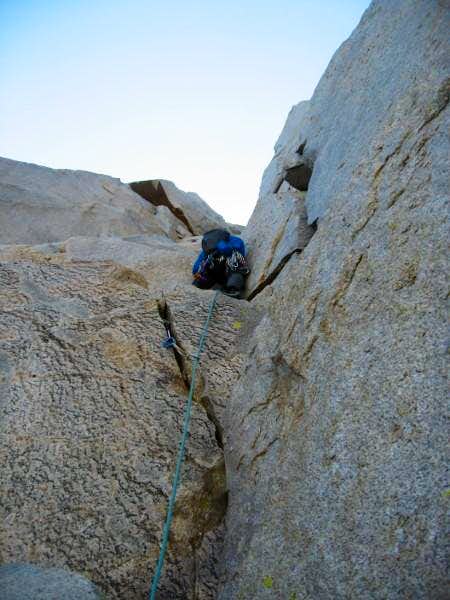 Normal Route-- Leading P2
This route is at almost the far right end of the road-facing aspect of Cardinal Pinnacle. It is shaded in the morning, making it an excellent summer option. Although I do not have a diagram-enhanced photo here, the route is easy to locate; basically, it goes up the huge dihedral formed by the main formation and its prominent subpeak.
As someone noted about this route in the log on the main page, the rock is solid where you climb it and place pro, but there is also a lot of loose rock around. On the first pitch, as careful as I was, I could not help but once send a good-sized rock tumbling down toward my followers, and on the second pitch, three times I had to warn my partners and tiptoe across ledges covered with scree.

From Bishop, drive west on 168, signed for South Lake and Sabrina Basin. Stay on 168 when you reach the junction with the spur to South Lake. In other words, continue toward Aspendell and Sabrina Basin. From the vicinity of the intersection, you can see Cardinal Pinnacle. Drive past Aspendell and then park in one of several parking areas off the road below the crag. You are about 17 miles from Bishop. Now hike up the talus and boulders to the crag.

If you read the Mountain Project page for this route, you might feel a little confused because the basic description and the very detailed comment almost seem to be describing different routes. Some comments on the main SP page may add to the confusion as well.
I don't know if my description and photos will clarify everything, but I hope they will at least be accurate enough for any party to get up and down safely.
Following is my description based on what my party did.
P1-- 5.6, app. 200'. Starting from a sandy slope approximately directly below the dihedral (it does not really form until well up the crag, where it is unmistakable), head up, mostly scrambling but with the occasional real climbing move. The crux was a short dihedral that felt slightly harder than 5.6, but this is the Sierra. At a small ledge just below a much larger one, I used a good crack to build a three-piece anchor. Why didn't I build my anchor on the larger, very comfy ledge where you could probably pitch a tent? I was leading on a 70, but we were a party of three with the second and third connected by a 60. As it turned out, my intuition was correct. Before starting the next pitch, though, we all scrambled up to the big ledge, where we did not make an anchor. I would have preferred having an anchor protecting against an upward pull, but the obvious choices-- large boulders-- were easily movable, and the other apparent option was slinging a cluster of shrubs. Fortunately, placing a good piece quickly on the second pitch was easy. The detailed MP comment talks about a Class 3 ramp and then starting under a left-facing dihedral about 30' below some rappel slings. I think we found all this on the way down, but none of it is so apparent on your first trip up. Anyway, the two pictures below show what I think is the "correct" start and the start we used. Both work, though you may have to spend more time chasing pro on my variation if you want to keep it honest.
P2-- 5.6, app. 150'. Very fun to lead. Again, remember this is the Sierra; two sections near the start would easily be 5.7 in many other places, but everything's there, especially if you have long slings (I slung two boulders on the way up). This pitch ends at the notch between the main crag and its subpeak. The detailed comment on the MP page mentions rappel slings here, but there are bolts there now. Along the way, you will pass a rap station. 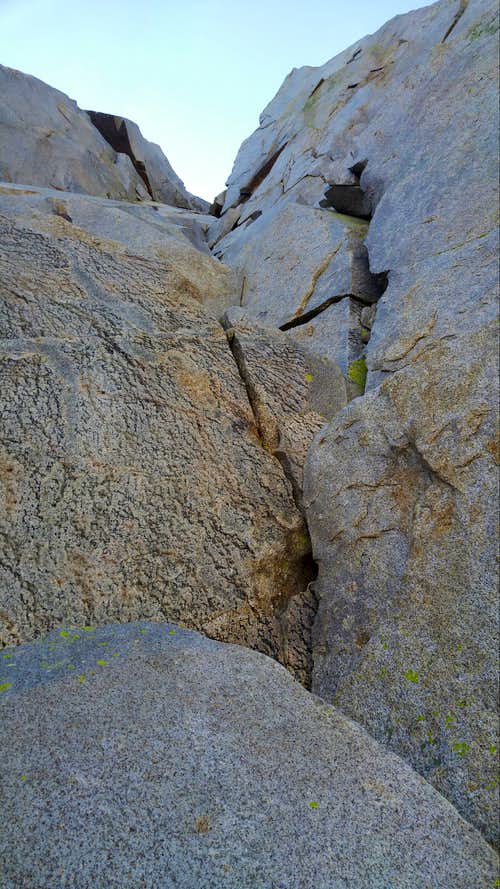 P2
P3-- 5.5, 50-100'. From the P2 bolts, scramble right and then climb the short, beautiful crack. Although the crack is low-angle and I agree with the grade, there is one tricky sequence that can throw you. Above the crack, climb past a huge, overhanging boulder that seems solid but which your common sense says not to touch. Build a gear anchor sometime after that. 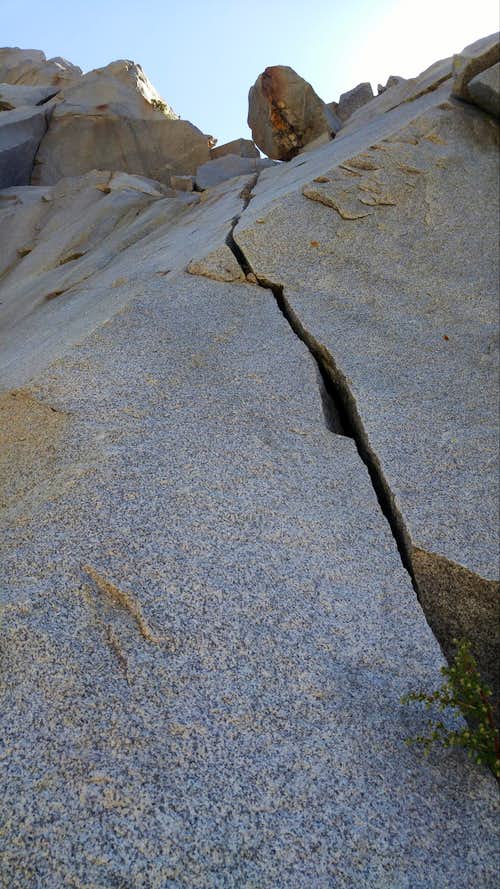 P3
Descent-- The quickest way down is to scramble up to the summit or the summit ridge and then jump. If you want to live, you have at least three options: 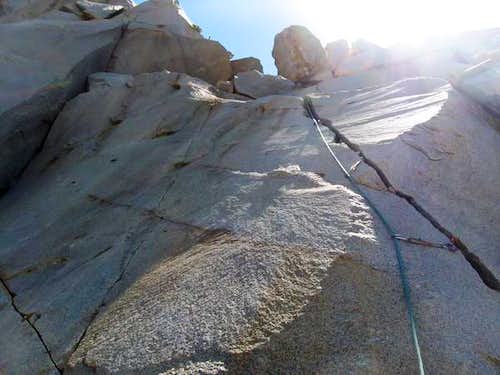