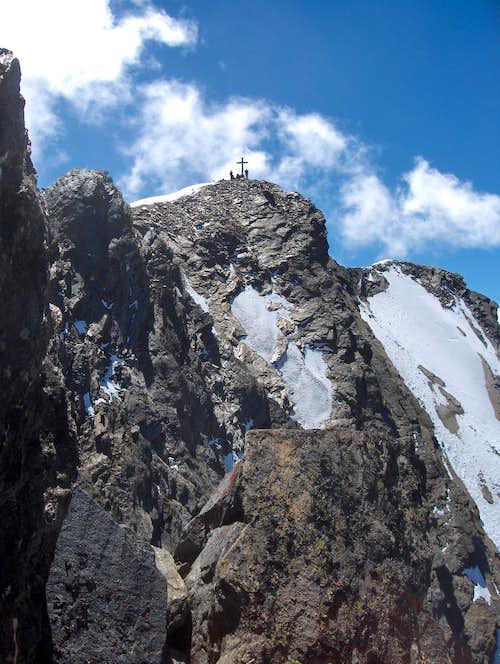 People on the south summit. View from the ridge, not all that far away
Although not the highest in the area, Hochwilde is a very popular mountain. The summit offers fantastic views of the still sizable glaciers in the southeastern part of the Ötztal Alps, and since all the higher peaks in the vicinity are further north, you can see far away into Italy and even into Switzerland to the southwest.

Most people take the easiest way up, from the Stettiner Hütte to the south, on the Italian side, and return the same way. The route is a marked but difficult trail, suitable only for experienced hikers who are not afraid to use their hands. The route has been changed recently after rockfall hazard made the old route unsafe. It avoids the glaciers, but some people use a rope when scrambling up some of the steeper and exposed sections.

However, while only slightly harder, traversing the mountain and visiting both summits adds a whole new level of excitement! At 3482m, the south summit is the highest, but at 3461m the northern one is not all that much lower. The two are connected by a beautiful, almost 400m long, jagged rocky ridge. It is very exposed, but the rock quality is good, the climbing relatively easy (UIAA grade II) and there are some fixed steel cables along the way. Not continuously though, which means it's not a Via Ferrata. Last but not least, to get there from the north, you'll have to cross a glacier, which just adds more variety, more fun and more scenery to enjoy. 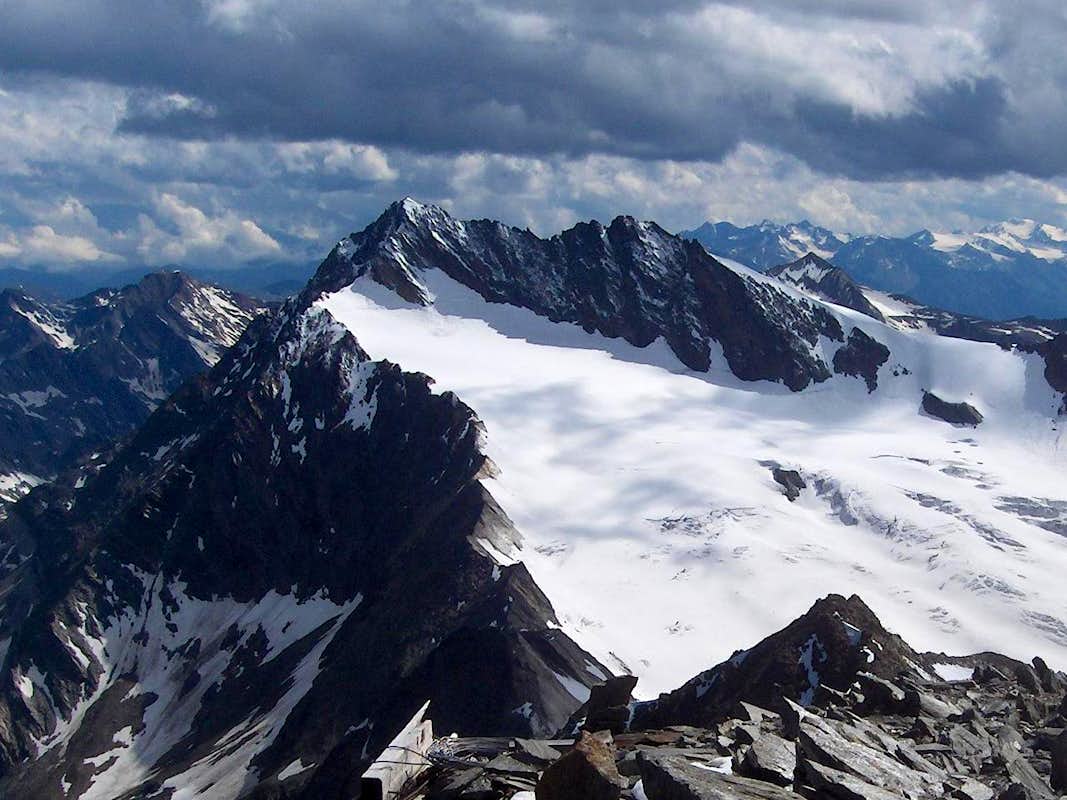 It's an exhilarating ridge between the southern and northern summits of the Hochwilde. Difficulty UIAA II, mostly with steel cables, but very exposed.The south summit (3482m) is on the left, the north one (3461m) on the right. Seen from the Hinterer Seelenkogel (3472m), a good 4 km away to the NNE.

Click here to view a larger mapThe paddle points at Obergurgl.
The best starting point for the route is the Hochwildehaus (2883m). From Obergurgl (1900m), the ski resort at the end of the road in the Gurgler valley, it's a scenic 5 hours hike to the southwest. The higher you get, the better the views of the glaciers will be.

An hour from Obergurgl the route passes the Schönwieshütte (no overnight accommodation), and half way lies the Langtalereck Hütte (2430m).

If 5 hours is too short to your liking, you can add the Hangerer (3021m) to your day. The easiest way up is the marked route from the Schönwieshütte.

Obergurgl can be reached by car, or by public bus from Ötztal Bahnhof, which has a train station. Innsbruck has a small international airport.

To the south, the closest city is Meran. In summer, the scenic Timmelsjoch road is the shortest way from Italy to Obergurgl. In winter the pass is closed, and a long detour is unavoidable. 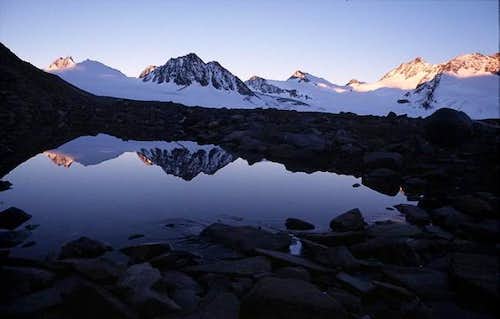 From the refuge, you can already see a good part of the route. Follow the hiking trail heading south, to the eastern branch of the Gurgler Ferner (ferner = glacier). On the other side lies the rocky Mitterkamm. Cross the glacier, aiming for the saddle just southeast of it (3150m)(46.778°N / 11.003°E). Left of this saddle, a bit further southeast lies the Annakogel (3336m).

The glacier is not very wild, but there are a few crevasses, and more so as you get higher. 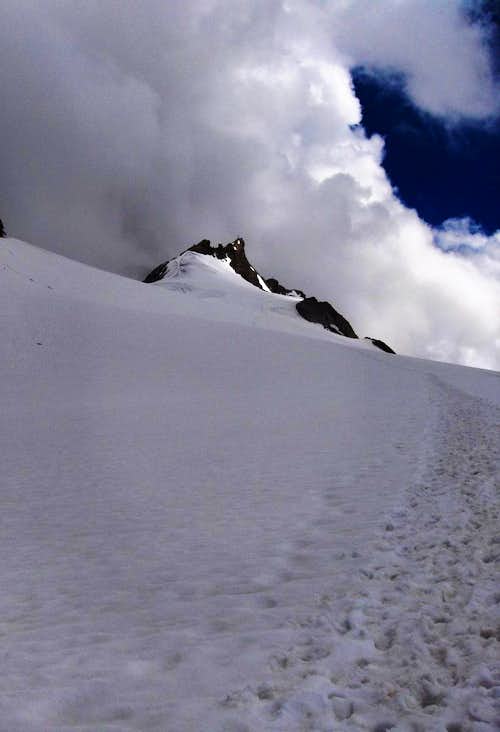 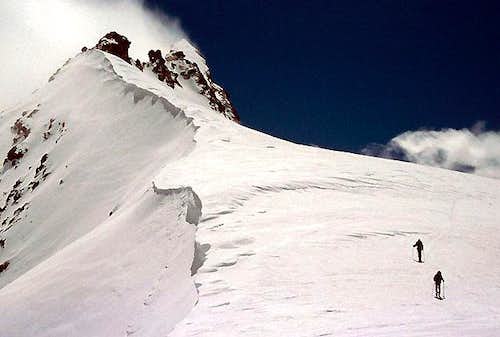 Approaching the Hochwilde north summit on skis. Mid May 2005 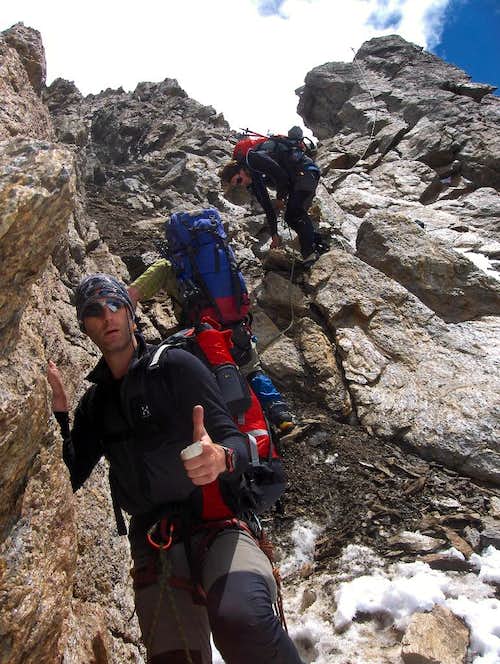 Descending the Nördliche Hochwilde, this is the last scramble down to get on the glacier. High up, the cross on the north summit sticks out against the clouds.
Follow the intermittent steel cables up steeply to the small northern summit, with the big summit cross. From there, stay on the ridge to the big southern summit, where another big summit cross awaits you. And, probably, so will a few admiring and bewildered hikers that came up from the other side, because from the south summit, the exposure makes the ridge look harder than it really is. 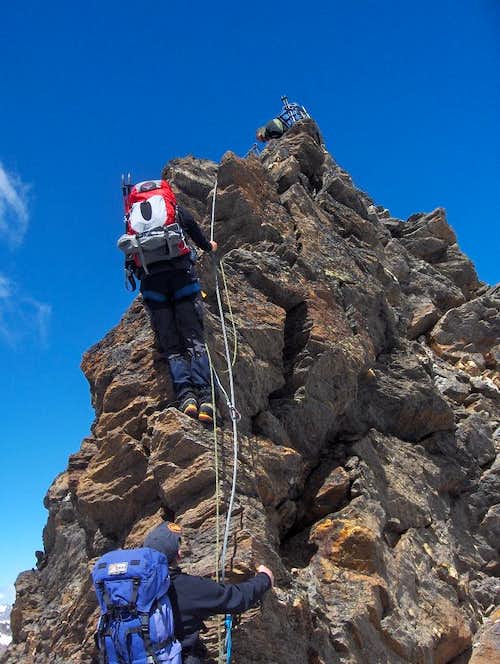 The Hochwilde ridge, partly secured by steel cables
You can complete the traverse by descending the normal route from the south, or go back over the North summit again. I have read about other options, including the possibility to descend from the south summit over the Langtalereck Glacier to the Langtalereck Hütte, but have no personal knowledge about those routes.

A variation on this route is to go directly over the Annakogel (UIAA grade I/II) instead of bypassing it on the right. This route is called the "Gustav-Becker-Weg".

A hole in the rocks at the north summit


The Hochwilde south side, in Italy, is steep and avalanche prone, but the route from Austria is relatively flat. The only steep parts are on the ridge. As a result, the full traverse is usually too dangerous outside the summer season, but if there isn't a prohibitively large amount of snow on the rocks, the Austrian route can be climbed all year.

In winter and spring you can ski back down to Obergurgl, making a fast descent. It's a long way up though.
Fall is probably the poorest choice, when there isn't enough snow yet to ski down very far, the days are short and the refuges closed.

The Alpenvereinskarte Ötztaler Alpen 30/1 Gurgl, scale 1:25 000 is indispensable when coming from the north.

Obergurgl is a small, bustling ski resort. While not completely deserted, it's much more quiet in summer. 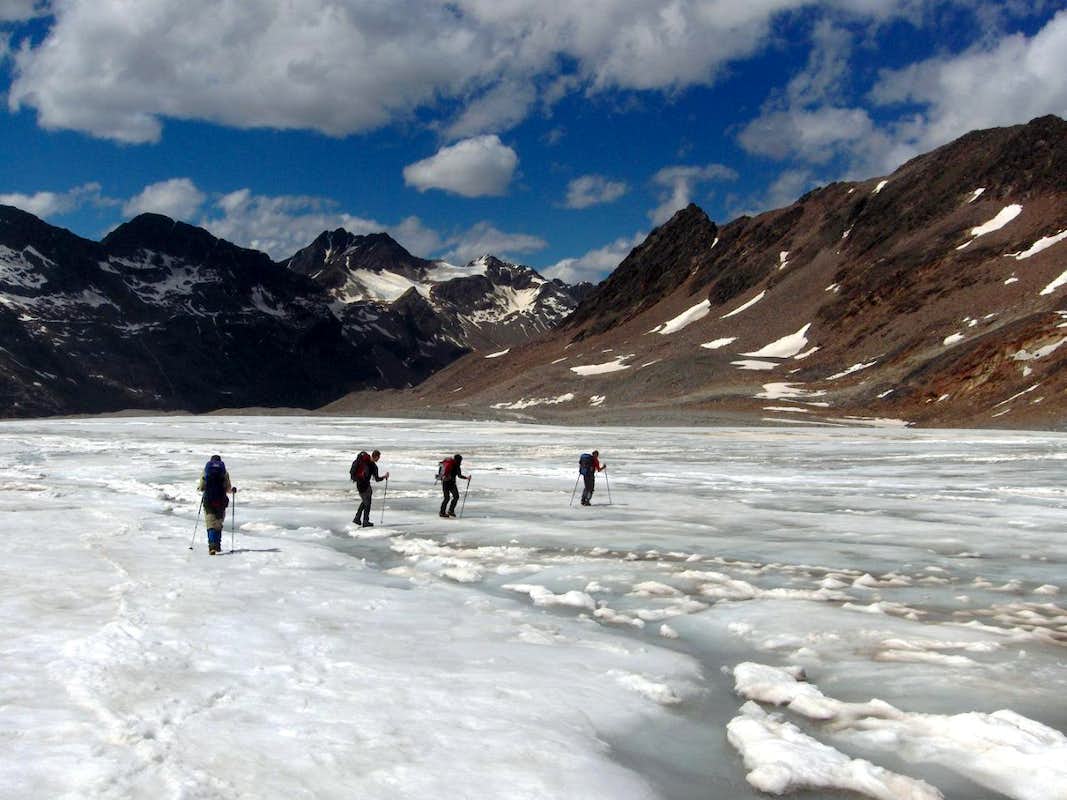 Crossing the wet Gurgler Ferner on the descent. If you look closely, you can see the Hochwildehaus on the nearby brown ridge just left of center. Towering behind it is the Ramolkogel (3550m), with the small south facing Ramolferner.