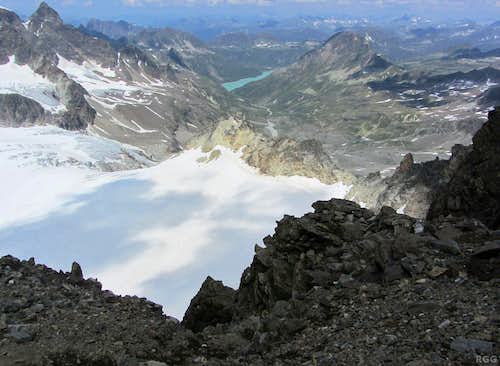 Piz Buin summit view to the north. The white expanse is the Ochsentaler Glacier, and the normal route is well on the left, mostly outside this photo actually. In the distance is the colorful Silvretta Stausee.
Although at 3312m it is only the third highest peak in the Silvretta Group, Piz Buin is the best know one. One might believe that that's because it's the prettiest, or because it's the highest peak of the Austrian Vorarlberg region, but I don't think so. As it happens, the name has been adopted by a brand of sun screen, and the advertising has given the name a lot of exposure.

That said, it actually is a very scenic peak, it has great summit views and there are several easy routes to the top, from Austria as well as from Switzerland. All of these share the final part of the ascent, some 250m up from the Buinlücke (3056m), the saddle between Piz Buin and its smaller sibling Kleiner Piz Buin (3255m). The differences lie in how to get there. 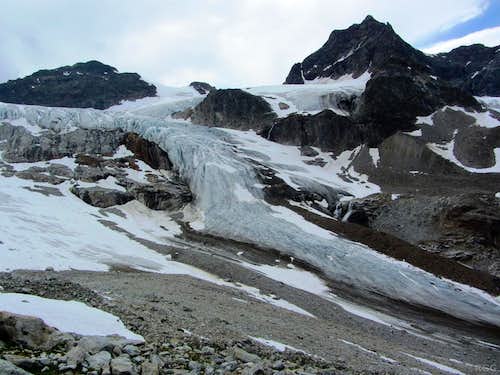 The snout of the Ochsental Glacier
Most people take the normal route from Austria. It's a scenic glacier walk followed by the final hike and easy scramble from the Buinlücke to the summit. Depending on the circumstances, the most tricky part can be to get on the glacier. In 2013 that wasn't really difficult, but that may change over time. As for risks, the glacier has plenty of crevasses, so you'll need to rope up. The gradient is never enough to cause real problems, although when it's icy, a slip on the steepest part, near the bottom, can certainly result in injury: It flattens out soon enough, but you may come to a sudden halt against some boulder, or suffer abrasions or break something while trying to arrest your fall on the hard ice or the embedded rocks.

Of all the high peaks in the Silvretta group, Piz Buin is the most popular mountain, so on a nice summer day don't expect to be alone.

In winter people ski down this route from the Buinlücke. To ski down all the way from the summit didn't appear impossible to me, but would require extremely good skills.

What's in a Name?

Piz Buin is sometimes called Großer Piz Buin, to distinguish it from it's smaller next door neighbor. The Swiss, just south of the border, call the pair Piz Buin Grond and Piz Buin Pitschen, respectively, and their name for Buinlücke is Fuorcla Buin. 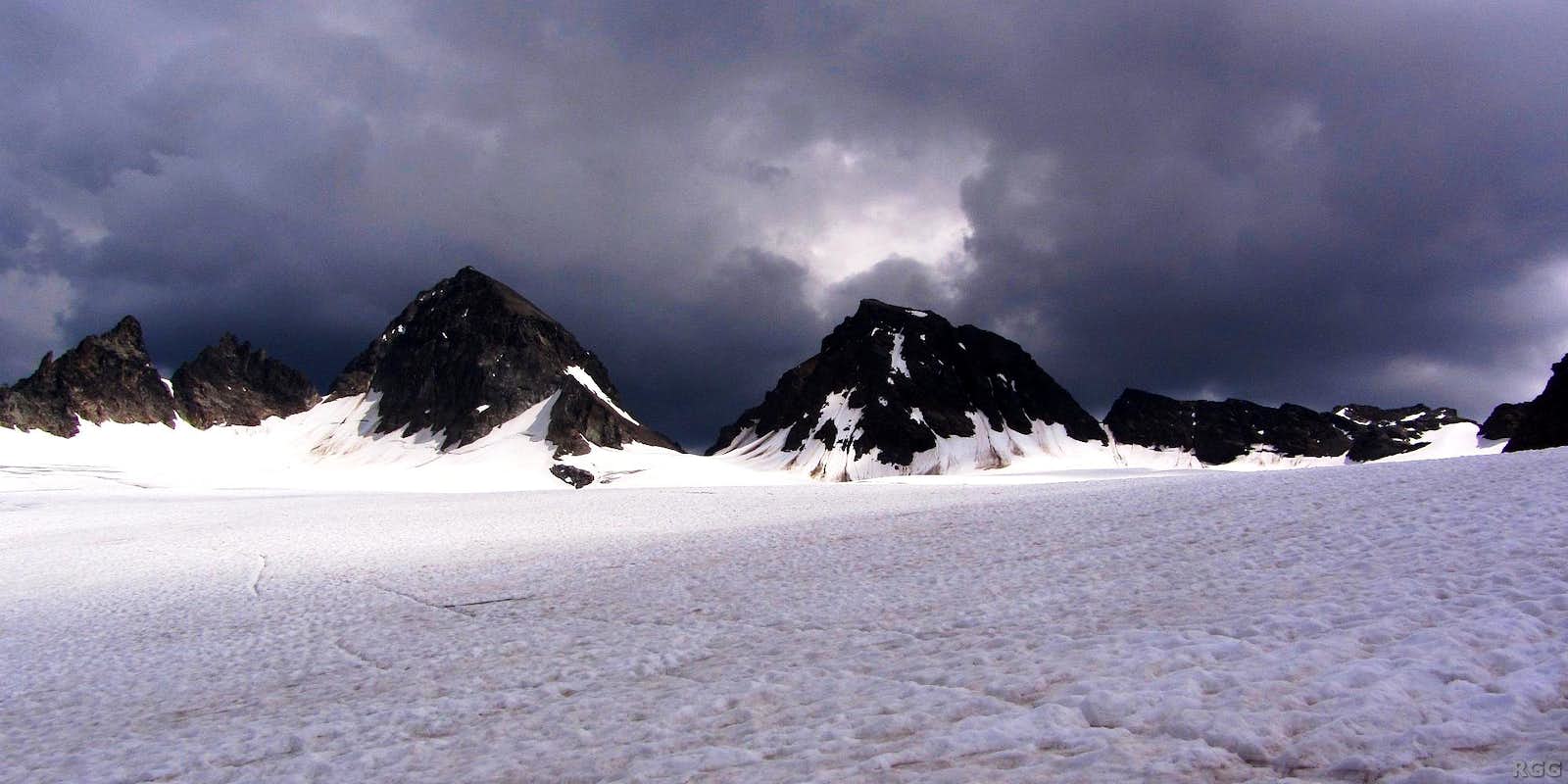 View back from high on the Ochsental Glacier, during the descent after climbing Piz Buin on a hot summer day. The clouds don't promise anything good.
The Buinlücke is the saddle in the center, with Piz Buin on its left and Kleiner Piz Buin on the right. The saddle on the far right is Fuorcla dal Confin. 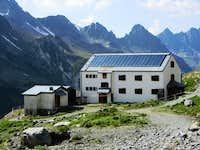 The logical starting point is the Wiesbadener Hütte (2443m). That's a two hour walk on a marked, clear hiking trail from the northern end of the Silvretta Stausee at Bielerhöhe, the nearest road. This is also a popular route with mountain bikers. Public buses from Landeck and from Bludenz service Bielerhöhe. It's a toll road, and it's closed during the winter.

If you're in good shape and start real early at Bielerhöhe, or bring a bike yourself to save time, you could make it to Piz Buin and back from there in a day. Most people spend the night before at the hut and leave around the crack of dawn. 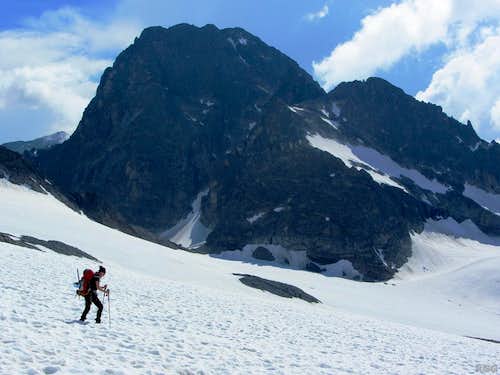 The Wiesbadener Hütte can also be reached from the south, from the Swiss village of Guarda. The trail leads over the Vermunt Pass (2797m), called Fuorcla Vermunt in Switzerland. Once you've crossed the border into Austria, the trail descends on the small and relatively harmless Vermunt Glacier. I've been just north of the pass, on the Vermunt Glacier, but haven't been on the south side. As Guarda lies at around 1650m, this approach would require the better part of a day.
The trail passes Chamonna Tuoi (2250m), which is the starting point for the Swiss routes to Piz Buin. Consquently, coming from Guarda, it makes more sense to climb Piz Buin by the Swiss normal route.

Open Source map, including the normal route. Switch to satellite view to get a good impression of the glacier (and the crevasses!).

Note: The route from Switzerland over the Vermunt Pass to the Wiesbadener Hütte is shown, with some viariations, but the two easiest routes to Piz Buin from Switzerland are not. It does show the other Austrian route to Piz Buin, the "Wiesbadener Grätle route": That also starts at the Wiesbadener Hütte, but instead of turning west soon and heading up the length of the Ochsentaler Glacier, it continues south, to the Vermunt glacier, and turns west much higher up, to cross the Wiesbadener Grätle to reach the upper part of the Ochsentaler Glacier just north of Piz Buin. Although still an easy route, it's a little harder than the normal one, for crossing the Wiesbadener Grätle involves more scrambling. On a map it looks shorter, but it takes longer. It's also safer, because the glacier crossings are shorter and not highly crevassed.
The not shown normal Swiss route comes up from the south, well west of Kleiner Piz Buin, over Fuorcla dal Cunfin, and joins the normal route from Austria shortly after that. A somewhat harder Swiss route comes directly up the Buinlücke. 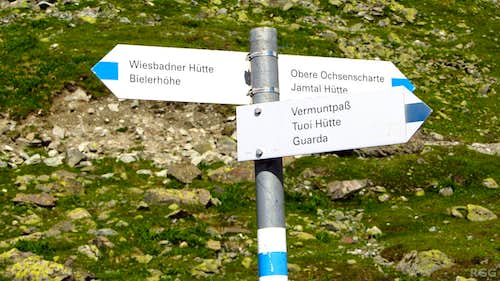 The sign post just south of the Wiesbadener Hütte
From the Wiesbadener Hütte, follow the gently rising, clear, marked trail heading in a southerly direction. After a few minutes, you get to a sign posted junction. Take the right branch, towards the Vermunt Pass to the south. Within 10 minutes you'll reach another junction, less obvious and without signs this time. Again, take the right branch, which will soon start turning southwest and descend a bit. Before long it will reach the small mountain stream fed by the Vermunt Glacier to the south.

The terrain on either side is a mixture of bare rocks, grassy patches and small plants. When the snow disappears, many of these seem to be in a hurry to quickly produce beautiful flowers. 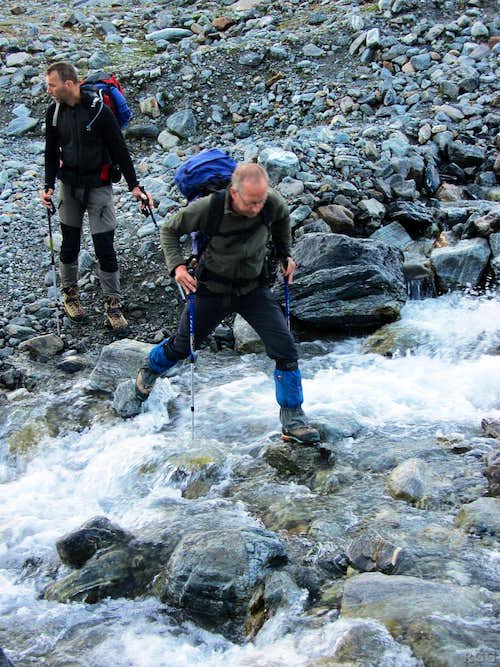 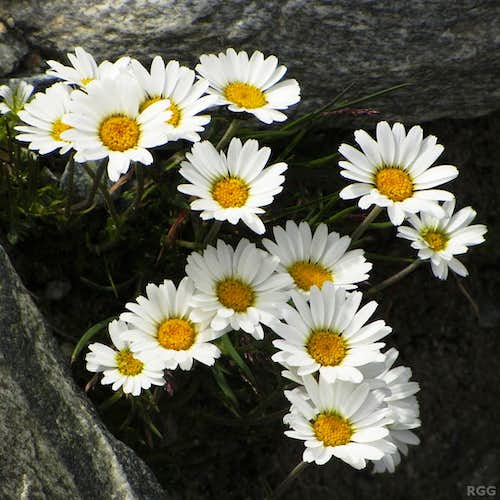 Alpine daisies along the trail
After crossing the stream the trail goes west, up the slopes on the other side of the valley. Less than 100m higher it crosses a ridge, just south of the minor summit of Grüne Kuppe (2579m). Looking west from the top of the ridge you now have a great view of the snout of Ochsentaler Glacier flowing down towards the north, as well as of the mountains due west, especially the Silvrettahorn (3244m).

Looking west across the snout of the Ochsentaler Glacier, and the Silvrettahorn towering above it 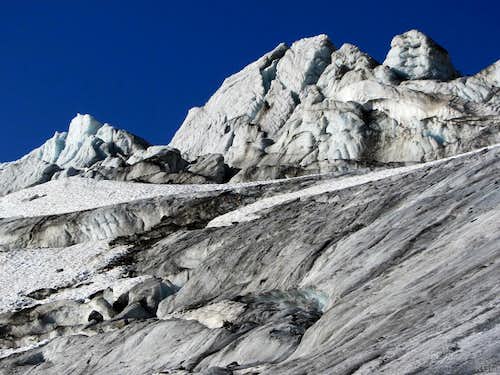 Wild ice formations on the east side of the glacier, just above the tongue
Close to the snout you'll actually find the steepest parts of the whole glacier, especially on the east side. To get on it, the trail leads part way across the valley towards the Silvrettahorn before going on the glacier itself. The ice has retreated a lot in recent years, which suggests that the best access point may change in the future. In 2013 it's in the middle of the tongue of the glacier, but keep going further west while you're getting higher on the glacier, to avoid the most crevassed areas as well as the steepest ice. If there is snow on the glacier, be careful, for the western side is crevasses too, even if you can't see them. On the other hand, if it's icy, you can clearly see all the crevasses, but then the main risk lies in falling while getting on the glacier.

As you get higher as well as closer to the western edge of the glacier, lined by the steep walls of the Silvrettahorn, the slopes become easy. Mind you, there are still some crevasses in this area, but much less than on the eastern side of the glacier. Turn south now, and head up the glacier. A few hundred meters later, start making a gradual turn to the southeast, heading for the Buinlücke (3056m), the obvious saddle ahead. Not long before you get there, you may see smaller trails joining your own, coming from left and right. The one from the left, i.e. the east, is from the Wiesbadener Grätle route, the one from the right, i.e. the west, is from Fuorcla dal Confin, a saddle on the border with Switzerland. 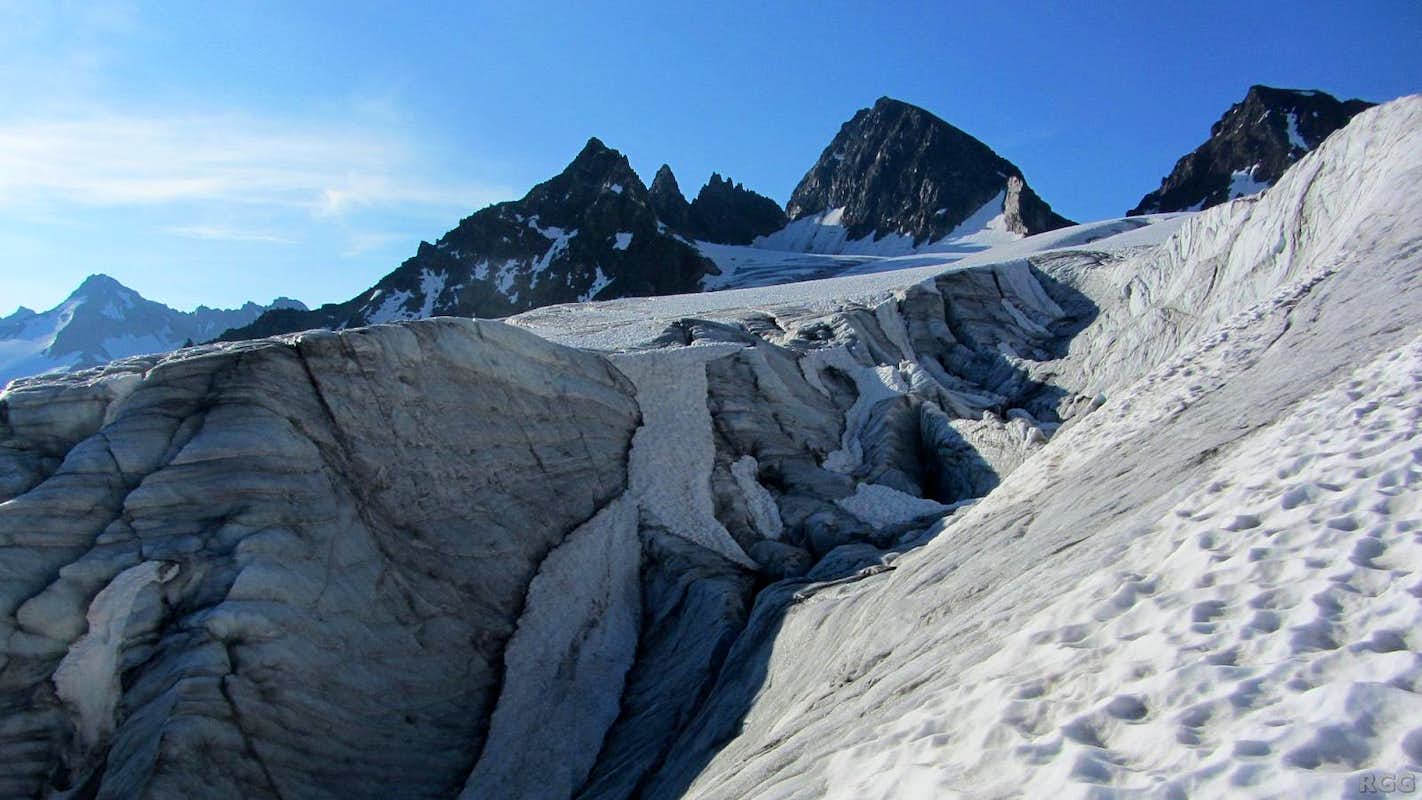 A little higher on the Ochsentaler glacier it gets easier. The Buinlücke is the saddle on the right, flanked by Piz Buin and Kleiner Piz Buin. From here, to avoid the more crevassed parts, the normal route first goes south, i.e. aiming to the right of Kleiner Piz Buin (and just outside of this picture), but before long it starts a gentle turn left to the Buinlücke. 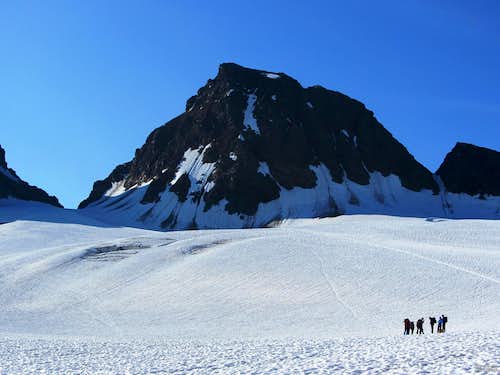 A group of climbers having a break on the Ochsentaler Glacier, in front of Kleiner Piz Buin. As you can see, there is a crevasse field direcly between them and the Buinlücke. The route takes a wide turn to avoid that.
At the Buinlücke you can leave your crampons and ice axe. The route heads up a scree slope, made easy by a clear trail. Eventually the scree ends and with it the trail, and the scrambling begins. There are several route variations, which is convenient if there are more people on the mountain. It's never overly exposed and there are plenty of holds everywhere. The route is rated UIAA I-II. It depends somewhat on which precise route you take; we didn't have any difficulties. Roping up is optional, depending on your skill level. Wearing a helmet is a good idea, for other climbers higher up can easily dislodge something. 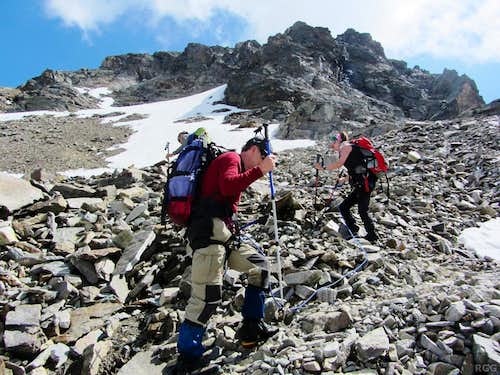 Ascending the scree above the Buinlücke 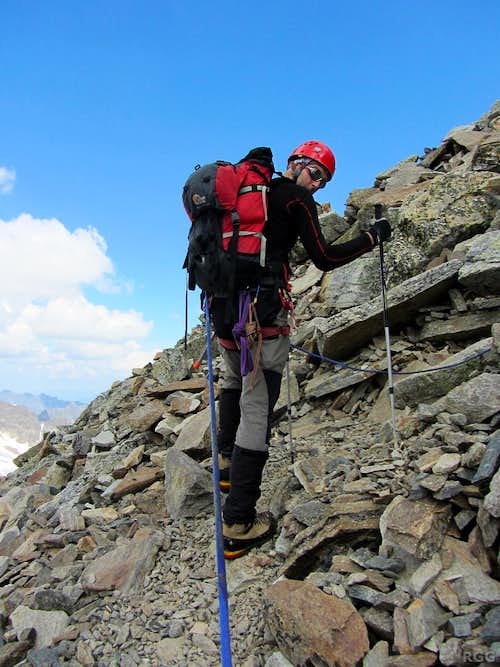 The trail on the scree slope 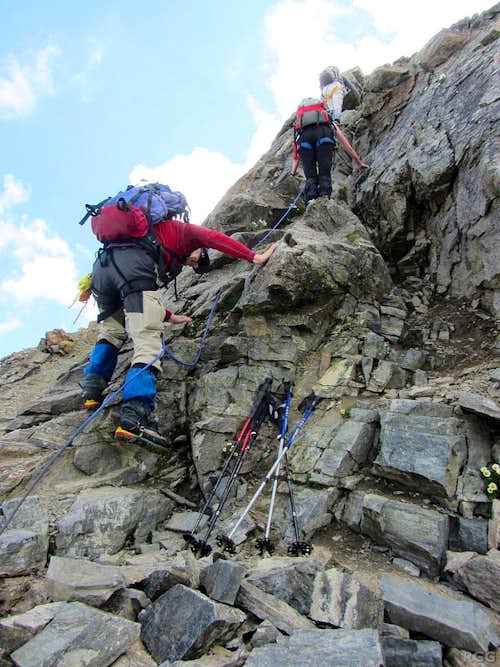 Start of the scramble... 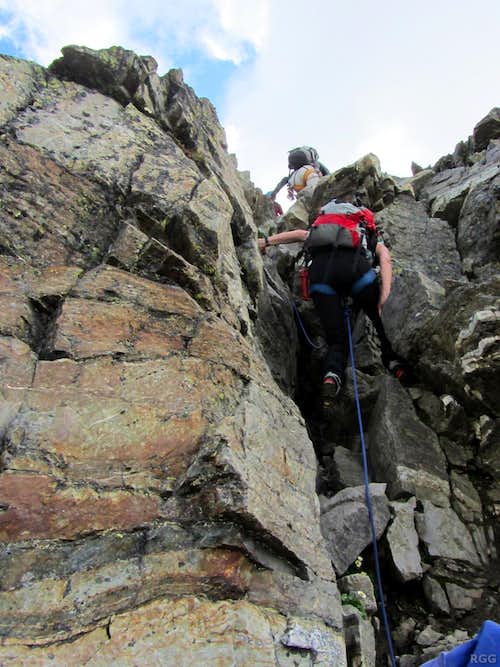 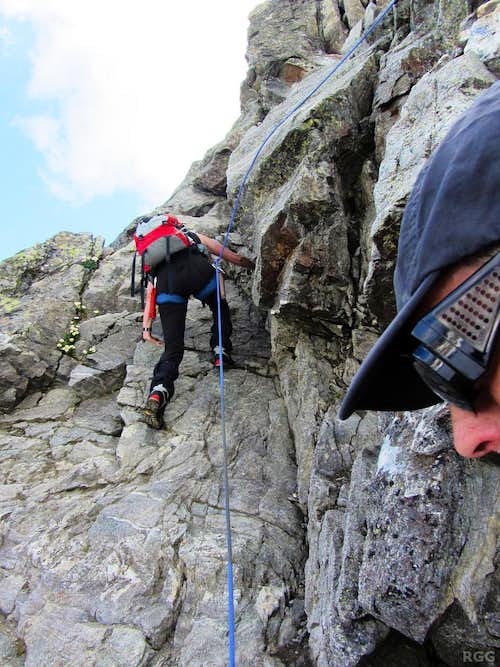 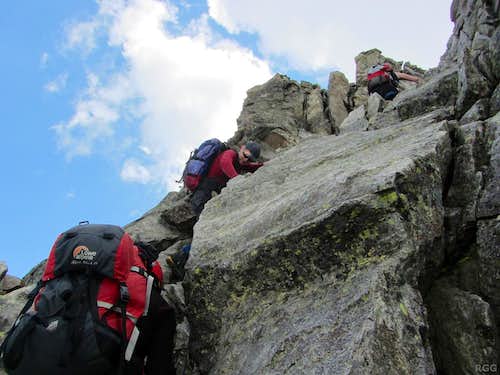 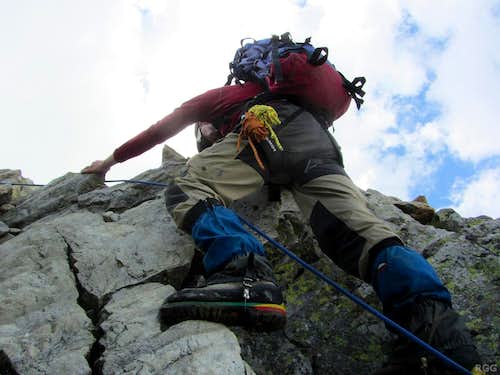 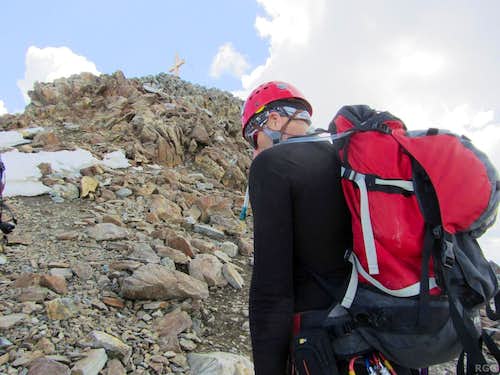 And finally a short walk to the summit cross


After the scramble, the final short bit to the top is a plain walk on a clear trail again. A big cross marks the summit. It's not huge, but there is still room enough for a sizable party. 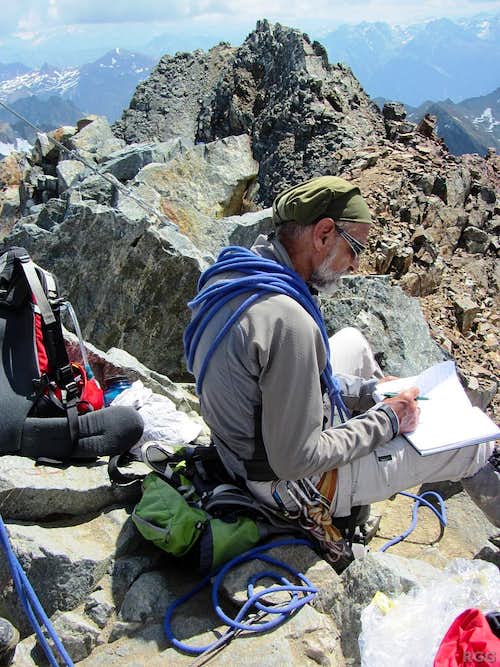 The road to Bielerhöhe, the Silvretta Hochalpenstraße, is a toll road. Parking at or near Bielerhöhe is free. 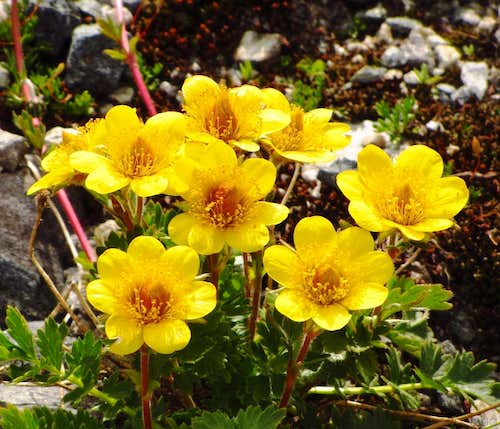 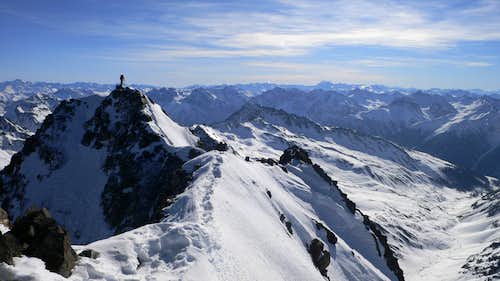 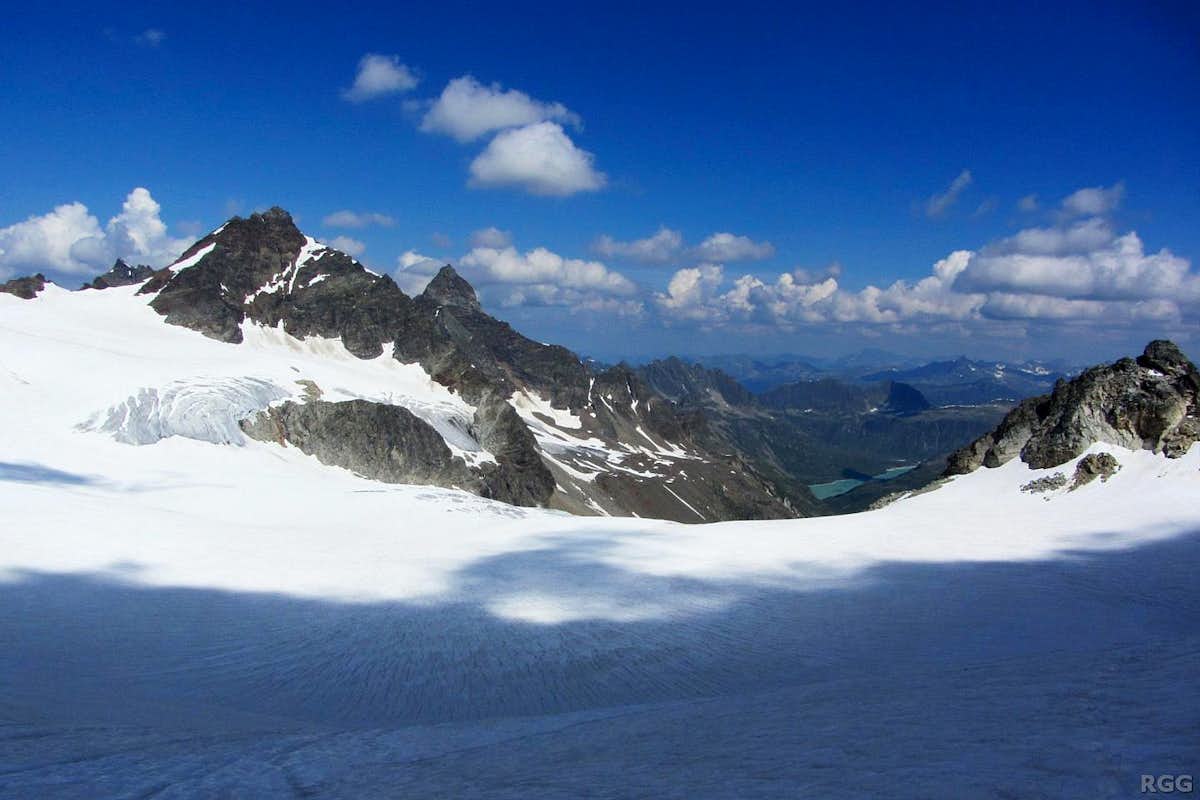 Panoramic view down the Ochsentaler Glacier from near the Buinlücke