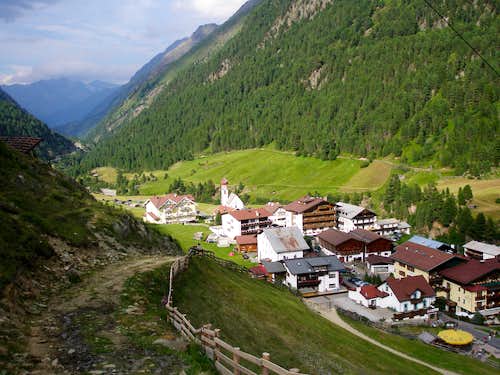 The small village of Vent, from low on the trail to Stablein

The Wildspitze (3768m) is the highest mountain in the Austrian province of Tyrol and the second highest in Austria, and the route from the Breslauer Hut is the most popular route to climb it. As a result, you can expect to see quite a few people on the mountain during the summer season, not all of them properly equipped and well prepared.

The normal route from the Breslauer Hütte (2840m), as it is called in German, is a nice, varied climb, and the scenery is wonderful. In normal conditions it's not difficult anywhere, but there are a few challenges for the unwary.  If you don't have enough experience for the route, it's easy to arrange a guided climb in the nearby village of Vent (1900m).

If the route is in good shape and there isn't too much traffic at the crux of the route, a normal time from the hut to the summit is 3½ to 4 hours, and to get back the same way about 2½ more. 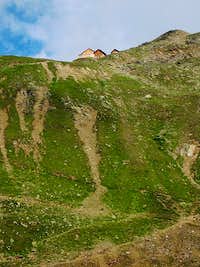 The grassy slopes below the Breslauer Hütte

Most people sleep at the Breslauer Hütte the night before climbing the Wildspitze and head out early next morning. Two hiking routes lead from Vent (1900m) to the refuge: via the hamlet of Rofen, or via Stablein. Either way, count on 2 to 2½ hours.

There is a road from Vent to Rofen, on the north side of the Rofen Ache, but far more scenic is the easy hiking trail on the south side of the river. Just before reaching Rofen, an exhilarating suspension bridge leads acros the river over a deep gorge. Even if you just visit Vent, this makes for a nice short hike, taking about half an hour (one way) and it's very popular on a nice day.  Children (of all ages) love this bridge.

After passing through Rofen, the trail gets steep as it ascends the slopes to the north, following the Rofen Bach up for over 600m. At that point the trail via Stablein joins from the right. For the final 200m up to the hut, the trail turns west, zig zagging up the grassy slopes.

In winter, Vent is a small ski resort. One of the ski lifts operates in summer too, and thereby provides a quick and easy way up to "Stablein" (2356m). From there it's 1 to 1½ hours to the Breslauer Hütte to the west, along a clearly marked trail. If you don't want to take the lift, there is a good hiking trail from Vent to Stablein too. 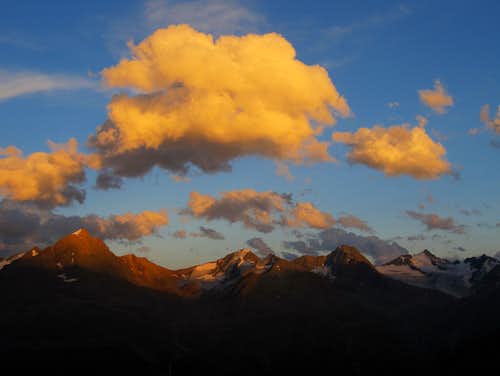 Alpenglow on the Ramolkamm, east of the Breslauer Hütte 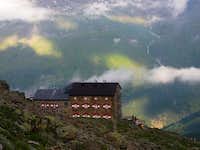 You can't see the sun go down itself because of the high mountains behind the hut to the west, but on a good day, the views towards the east can be memorable around sunset. 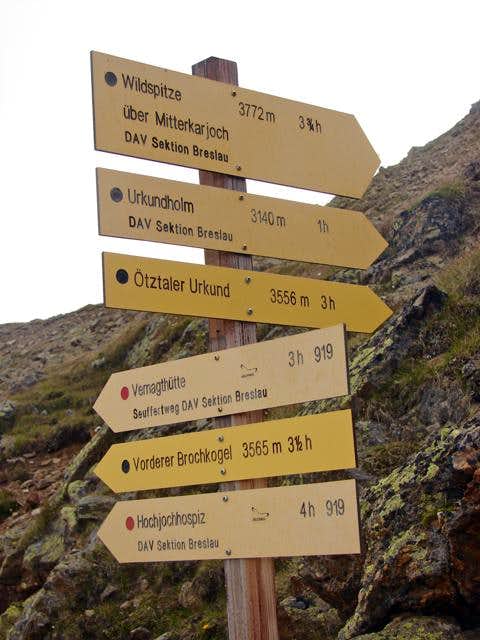 A few of options to climb from Breslauer Hütte

From the hut, two trails go west from the hut: the lower one is to the Vernagt Hütte, the upper one to the Wildspitze. A sign points the way, to the Wildspitze via the Mitterkarjoch.
After a while the trail fades away as you get close to the rapidly disappearing Mitterkarferner (ferner = glacier). 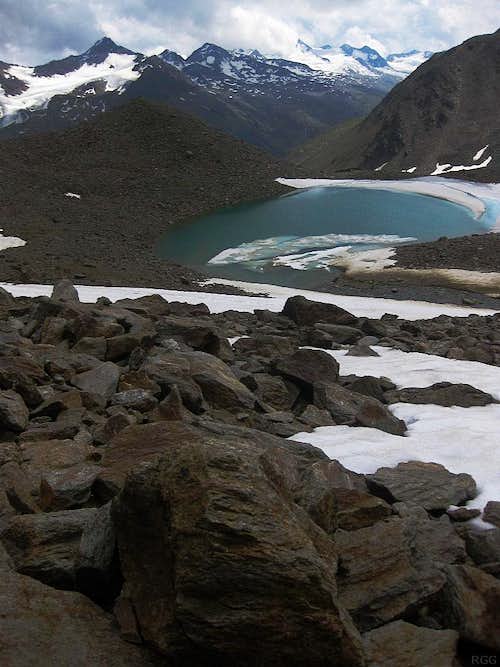 Melt water lake along the trail, below the Mitterkarferner

Keep to the center of the valley and west to northwest, gradually gaining altitude. On the glacier, make a wide turn to the north and then northeast, aiming for the Mitterkarjoch (46.8851°N, 10.8565°E) (joch = saddle). In summer, you'll recognize it by the snow filled couloir. 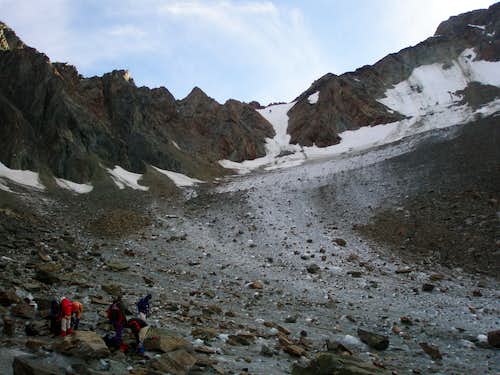 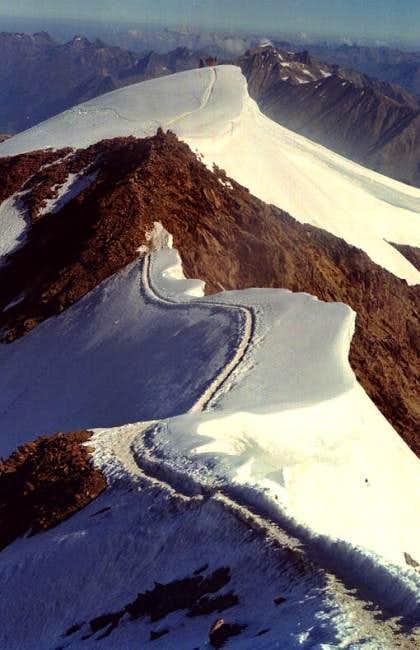 The snow slope is about 45°, but hard ice can make it much more difficult, and in addition, if there is not much snow, rockfall can be a serious problem. To avoid these hazards, a short via ferrata (grade B/C) has been constructed on good rock alongside the couloir. This is the crux of the route, and it can be a bit busy.

Once you've reached the Mitterkarjoch, the big Taschachferner stretches out at your feet - most of it towards the west and northwest. You have to ascend the gently rising upper area of the glacier to the east to get to the Wildspitze. Watch out for crevasses here!

The easiest way to the summit is via the rocky SW ridge, directly to the south summit. You may want to use your hands high up. Alternatively, you can first climb the slightly lower north summit by the snow covered NW ridge (later in summer it can can get icy) and then traverse the exposed ridge to the south summit.

Satellite view of the upper Taschachferner.The Mitterkarjoch lies at the bottom of this map, left of center, with the snow filled couloir below.The paddle points to the Wildspitze south summit. The NW and NE ridges leading to the north summit are clearly visible, as is the fine glaciated north face: lthe shadow clearly demonstrates that it is steep. Also clearly visible are the exposed N-S summit ridge and the rocky SW ridge. However, the reason for showing this image here is to illustrate the crevasse danger. And these are just the ones you can see from space!

Basic glacier gear: ice axe, crampons, harness, rope.
A helmet is highly advisable because of the rockfall hazard just below the Mitterkarjoch.