The Wurmkogel normal route leads up the West Face of the mountain and starts down in the valley at ether Untergurgl or Hochgurgl. The route is probable one of the easiest of the 3000 meter peaks in the area. The biggest part of the route leads over very
well marked trails that can best be described as small, unpaved dirt roads. The difficulty of most part of the trail is therefore as low as T2. Above the Top Mountain star restaurant at 3000meters steel cables
are placed to reduce the difficulty of the summit part of the route. This part is graded T2 to T3- at max.

Because of the nearby lift station and the light difficulty of the climb, Wurmkogel is a very popular destination for hikers in the summer period. Views from the summit are amazing. You can see the whole Otztaler Hauptkamm with grand mountains like Hochfirst (3405m), Liebener Spitze (3400m) and Hinterer Seelenkogel (3473m) in the south. In the southwest and west the Ramolkamm is visible with mountains like Seelenkogel and Ramolkogel (3550m). Towards the northwest
The Otztal main valley can be seen with the village of Solden. Towards the north you can see the Stubai Alps and in the east the Dolomites with famous peaks like Langkofel, Sella and the Tofana’s are clearly visible. An easy 3000 meter peak with grand views to say the least…

The summer route starts in the village of Hochgurgl. Trail 2 and trail 689 (see map below, T2/T3) lead up the west side of the mountain. It is also possible to start down in the valley beneath Hochgurgl. The advantage of the valley is the large parking space. The parking space is located at the base of the Hochgurgl Cableway near the village named Untergurgl (see P signs on the map below). From the parking space at the bottom of the lift facilities a well marked trail leads up to Hochgurgl (route 689, see map below). After arriving in Hochgurgl trail 689 joins with trail 2. Both trails lead up the west face of Wurmkogel. The trail can best be described as a small road, and is therefore graded T1/2. After about an hour there is a split-up. You can choose ether way though, since both routes meet up later. If you take a left you will follow route 2, if you take a right you will follow route 688. Both trails meet up just beneath the Wurmkogel chairlift which goes to the Top Mountain star restaurant. Keep following the trail up, which is still easy and cannot be missed (T2).

The well marked trails go all the way up to the base of the mountain where the Top Mountain Star restaurant is located. This is the ending point of the ski lift facilities at 3000 meters. I suppose most people therefore take the lift up instead of taking the hiking trail. From this point on it is only about 20 minutes until you reach the summit of Wurmkogel. The so-called Gemssteig is the secured path from the Top Mountain star restaurant to the summit. The manmade trail to the summit decreases the
difficulty significantly. There are steel cables and steps on the whole route. This last part of the trail is therefore graded T2/3.

In winter the route starts in Hochgurgl for the trained Tour skier. Follow the ski slopes up to the top mountain star restaurant. Otherwise take the lift facilities. In winter the steel cables of the Gemssteig are under a deep layer of snow, so you have to find your own way up. Head up just north of the West ridge and find your way up (see map above). The slope gets as steep as 35/40 degrees, so be careful not to slip. I was able to make deep steps in the snow, what made the ascent not too difficult, no ropes needed. Crampons can be useful, but are certainly not obligated since I climbed up on my snowboard shoes. After summiting go down the same route and ski down from the Top mountain star restaurant back to Hochgurgl. 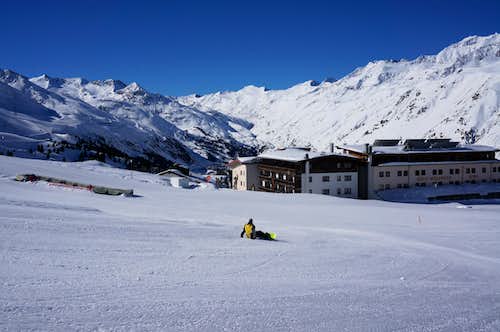 Good hiking shoes are recommended. A walking pole can be useful, but is not mandatory. 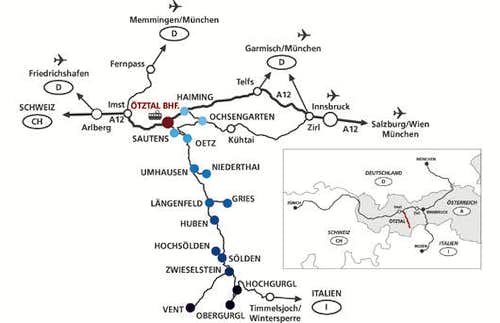 How to get there Map Obergurgl
From West:
- From Vorarlberg to Tirol over the Arlbergpass or the Arlbergtunnel (S 16) - Landeck - Autobahn A 12 in the direction of Innsbruck – take exit ‘’Ötztal’’ after the Roppener Tunnel - B 186 (50km) to Obergurgl-Hochgurgl

From East:
- From München or Salzburg take the A 93 towards Kufstein, after Kuffstein take the A 12 towards Bregenz, passing Innsbruck until the exit named ‘’Ötztal’’, take the  B 186 (50km) until you arrive in Obergurgl-Hochgurgl

From South:
- From Bozen/Bolzano head towards the Brennerpass - Brenner Autobahn (Tollroad) in the direction of Innsbruck - From Innsbruck on the A 12 towards Bregenz until the exit ‘’Ötztal’’ – continue on the B 186 (50km) until you arrive in Obergurgl-Hochgurgl

- From Merano in Südtirol use the Timmelsjoch passroad to Obergurgl-Hochgurgl, high alpine passroad with a maximum altitude of 2.500 m, The passroad is opened from the start of June until the end of Oktober; Tollroad. Passroad is closed in Winter! 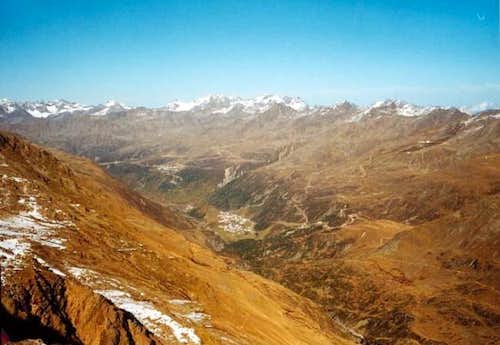 View into the Gurgler Valley by Rahel Maria Liu