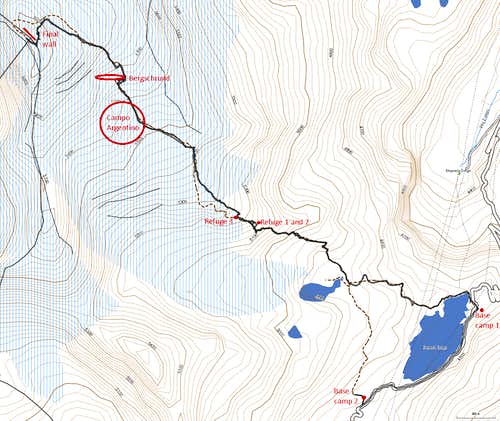 Annotated topo map
This is by far the most popular route up Huayna Potosi, the one that is sold in every mountaineering agency in La Paz. During the high season, dozens of climbers will climb, walk, crawl or even get hauled by their guide up this route, most of which for whom this will be their first mountaineering experience. People looking for a social climb will be delighted, while getting a head start and camping in tents will allow one to get a truer alpine experience.
I will stick to objective information related to the route here; my trip report (Oh my guides!) contains more opinions that may help you plan an unguided climb or understand what to expect on a guided climb.

See the mountain's main page. Have your transport drop you at either base camp. 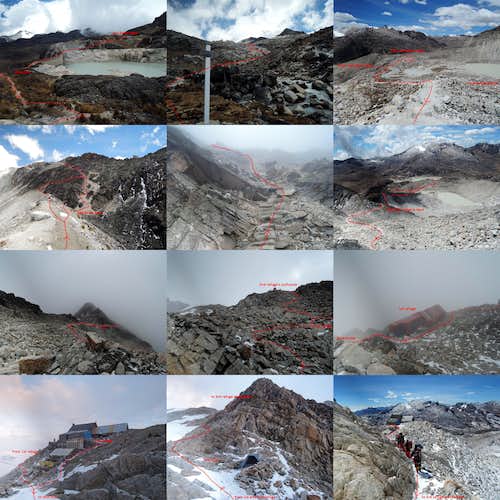 There are gaps and overlaps between the pictures.
The trail is obvious in good weather, but in fog, its multiple branches in its first half do get confusing. The trail is well seen on Google Earth.
From the base camp closer to La Paz, follow the obvious trail up until it reaches a small glacier-fed lake. Follow the trail until on climber's right (North) of the lake. From the base camp further from La Paz, cross the dam and follow the aqueduct for a short distance. The trail forks left, following the reservoir, and ascends to climber's left (South) of a stream to join the other trail.
The trail now goes up a lateral moraine on climber’s right (North) of the glacier’s terminus and its lake. It starts ascending onto a ridge, then drops slightly in a cleft on climber’s right following a sign for the “punto de registro a turistas”, where you will part with 20 Bs. Since the trail then re-ascends the same ridge, it is obvious that it only drops at this point so that the “cash collector’s” hut can be in a sheltered area. You can stay on the ridge then scramble right, which some people have obviously done before, saving some scree (and 20 Bs if your ethics can live with that).
There is no more fork afterward, so just follow the trail up the South side of the moraine. The scree will become rocks and the last bit will ascend quite steeply, but footing is safe. When the first building is seen on the top of the moraine, it is the second refuge's outhouse. Aim past it for the tent sites, the third refuge or Campo Argentino. Traverse right (North) for the first refuge, as it is slightly lower and on climber’s right of the ridge.

From the first refuge, the trail traverses left on a short distance on the moraine's North side until a saddle (actually a break in the moraine). From the second refuge, descend to the saddle. There are three improvised tent sites there. The moraine continues in the same direction after the saddle, with fixed rope on the climber’s left to aid getting on top of it. It is more rock hopping than trail from here on, and follow the moraine's crest to the third refuge. Then the moraine disappears into the glacier.
When camping and going unguided, I would recommend to camp around the first two refuges since the spots are better, but do hike up to the third refuge to see the following day's route in daylight. 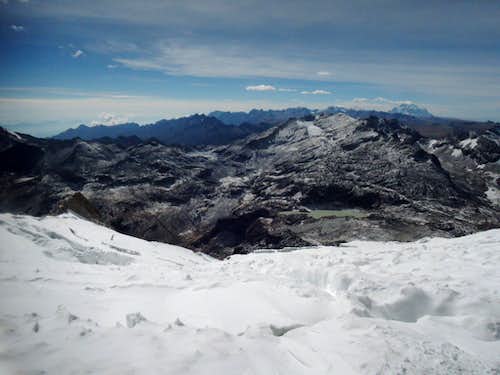 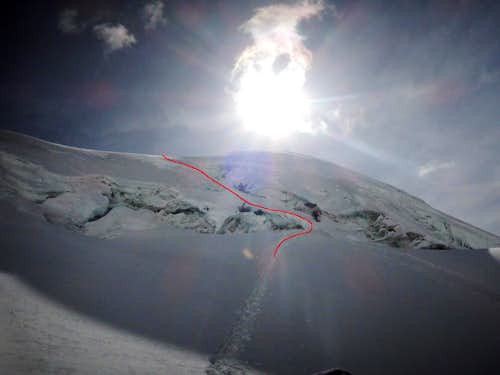 Bergschrund
From the third refuge, get the glacier travel gear on. The glacier drops not far on climber's left and there is a ridge far on climber's right; walk in-between. Aim up (Northwest) and right (North), getting to but not ascending the ridge, until a flat area at 5450 meters, Campo Argentino. This is at most easy route-finding on a wide and low-angled glacier. Truth to be told, unless you are the first team after a snowfall, there will be an obvious track around crevasses. Find your preferred spot for camping and you can go all the way to 5600 meters, but you will have a slight slope to manage. 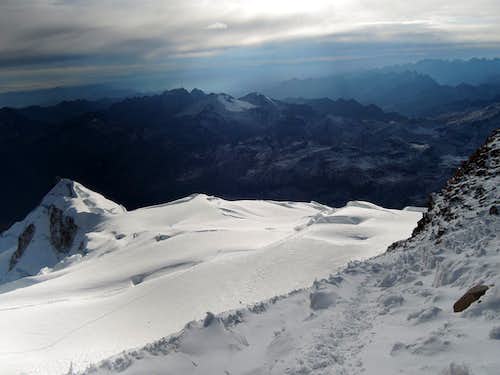 Upper glacier
After Campo Argentino, keep up and right (NNW) and you will face a bergschrund. The path will probably be obvious in the snow from earlier climbers, reaching the base of the bergschrund at the easiest crossing site. Try S16°15.931’ W68°08.814’ (WGS84) if you have a GPS, where there was a good quality snow bridge ( 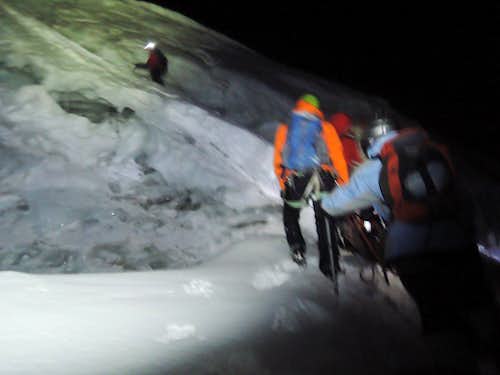 3 men on a snow bridge
as in 3 people were standing on it) reaching the middle of bergschrund's upper wall, followed by a diagonal crawl up and beyond its upper wall on 45° snow for 25 meters, on a trail almost a car-wide since everyone climbed there. If there is no snow bridge and one has to fully down-climb the bergschrund, 10 meters of AI2 may have to be climbed to scale its upper wall.
After the bergschrund, the glacier flattens, and it is again a matter of easy route-finding around crevasses, going up (Northwest) and left (West). Head past the South summit on climber's left, and you are at the final wall. 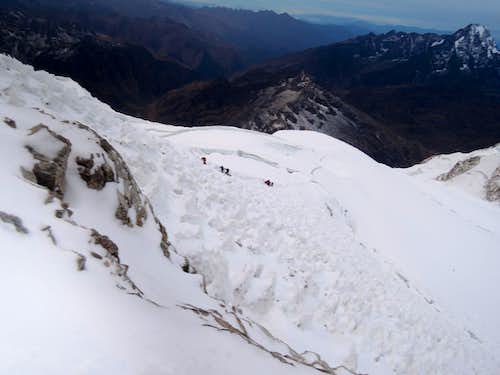 Final wall
Either head straight up that wall, on 30-45° well protected snow and some short mixed terrain, to the Southern summit ridge, or go around to the Northern summit ridge and walk up that one, with more gentle slope. 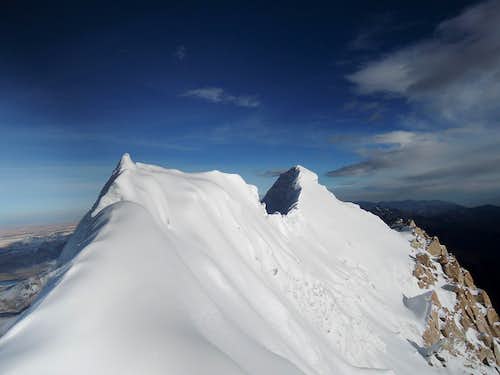 Southern ridge
On both ridges, a short walk is required on a thin arête to reach the summit. Some guides may avoid that arête if it is heavily corniced.
Descend by the same way. The mixed part of the final wall may need to be down-climbed but there is no need for rock protection. The bergschrund may be down-climbed with snow or ice protection depending on conditions. Near the end of the descent, make sure you head to the correct base camp when the trail splits.

Boots: front-pointing can come handy but is not necessary on the normal route. So if you already have warm boots, get strap-on crampons and you can skip the old plastic boots they rent.
Ice ax, crampons: mandatory, but unless you know how to inspect them, expect to rent dull crampons and an ice ax that is too long or too short. And bicycle helmets…
Ice screws, snow pickets: not all guides (and therefore rope teams) bring them. One should carry one or two of each if the team’s skill is low.
Crevasse rescue gear: guides do not bring them, but there are crevasses big enough to swallow a person. Decide for yourself.

About the guide packages

All the mountaineering agencies in La Paz will offer this trip. Prices quoted to me to join an existing group was 750 to 1000 Bs (without negotiating) in October 2016, for 2 days, refuge, meals and no equipment. Skipping on, equipment, meals or refuge may or may not affect the price depending on the agency. On the mountain, I found most people paid in the upper range or even more. For the same conditions, I was quoted 880 to 1200 Bs (with some negotiating) for a private guide.
Group vs private. With groups, try to have at least two guides in the group so that if one person has to head back, the rest can continue, but whatever they promise in La Paz may not be true once on the mountain. People who want to go faster or want to maximize their summit chance may choose to go private.
2 vs 3 days. On 2-day packages, one day is used to approach up to a high refuge and one for summiting and descending. The 3-day package adds a half-day mountaineering workshop and a night at the base camp. A proper mountaineering course is many days long, so do not expect too much. They may even cancel the workshop altogether "to not wet your gear" if the weather is not perfect (no money back obviously). The 3-day package helps for acclimatization too, but if this is your priority, you are better to head to the high refuge on the first day, learn mountaineering or "climb high sleep low" on the second day, and summit on the third day.
For the rest of the decisions, the packages will be similar across the board. All base camps and high refuges are actually quite similar, and food will be basic in all cases. The quality of rental equipment and guides will vary with agencies, but it is impossible to get objective information on which agency is better.

If youé planning to climb Huayna Potosi you should contact Bolivian Journeys. We did and it is a really good company, their guides are amazing, ask for Eulogio, Vicente or Luis.

Isn't there a second hut now? Updated beta would be great. Cheers!

I've just completed the two-day climb up Huayana Potosi. It went much as has been described on this site, although I was a bit out of shape and running on empty most of the time! This made my time 8hrs 20 mins, getting to 'la cumbre' at 9:20am. The other two in the group made it by 6am. The weather was optimal (May), meaning crisp, crunchy snow and great visibility. The views from the top in the brilliant sunshine were obviously spectacular, and one could see Lake Titicaca in the distance. I went with Jiwaki, whom I can't praise enough for their professionalism and, in my case, patience!