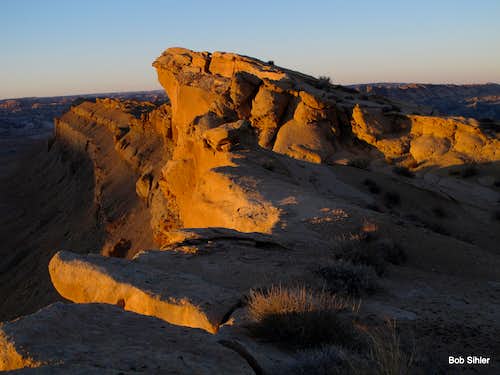 Yeah, I know...it doesn't sound too exciting. A "reef," to those familiar with the term as it applies to above-water formations, suggests a long ridge with no distinct summit.

Well, that's what it is.

And that's its appeal! You can hike and scramble on and on, tackling one "bump" after another, always soaking in the panoramic views! When you're ready, turn around and head back. Unlike its lower and much shorter neighbor Caineville Reef, this formation does not parallel a paved road, and a journey along it takes you into some of the most remote country in Utah and all of the Lower 48 as well.
Especially impressive are the views of the Bentonite Hills to the west, North Caineville Mesa to the east, and South Caineville Mesa to the southeast. The latter two are massive formations comprising many square miles, and they appear to guard their extensive summit plateaus zealously with treacherous-looking cliffs, but there actually are steep hiking routes up each.  Farther northeast along the reef, there are views of Factory Butte, an isolated Class 5 desert landmark. 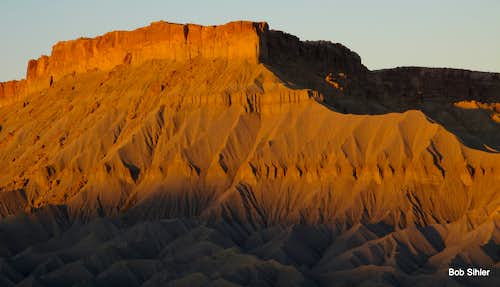 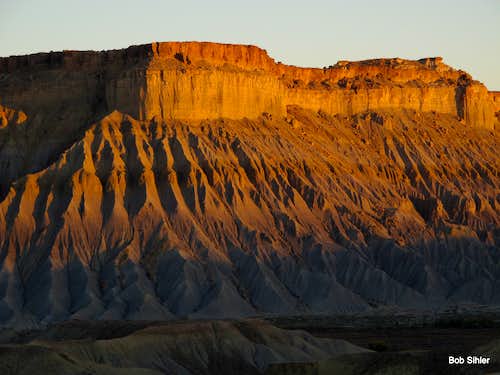 What is a reef out here?  Are these ancient undersea reefs?  No.  Although there were shallow saltwater seas in this region millions of years ago, the many "reefs" out here are actually uplifts.  In many cases, settlers and pioneers named them "reefs" because, like reefs in the ocean, they were large barriers to travel.  The reefs of Utah are lengthy ridge systems and typically present nearly unbroken cliffs for several miles.

9.5 miles east of the Capitol Reef National Park boundary, turn off Utah 24 onto a signed dirt road. This road leads about 26 miles to Cathedral Valley Junction in Upper Cathedral Valley, passing Lower Cathedral Valley along the way. But all you have to do is pull off in a gravel parking area next to the highway. 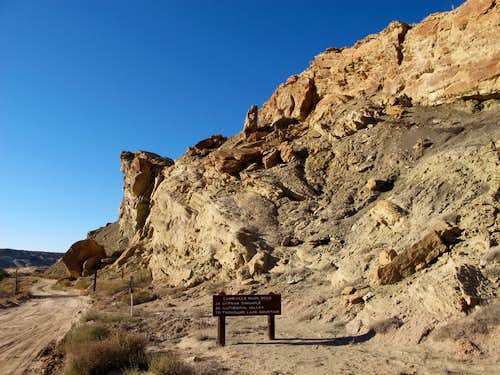 Just head up. It's not even 600' of "climbing" to reach what seems to be the highpoint, but there are all kinds of spectacular outcrops and other rock formations along the way. You can make this outing as easy or difficult (Class 2-5) as you wish. Once you are on the ridge above, go as far as you want. Some of the outcrops along the crest of the Reef are only Class 2 at their easiest, and some are Class 4. Be aware that the harder they are, the looser they are as well.

The 5327' highpoint is about 7 miles from the road.  Beyond it, the reef continues for even more miles until it finally ends at Muddy Creek.  On the other side of Muddy Creek, the San Rafael Reef rises, and it is much longer and more rugged than North Caineville Reef is.  There are probably large sections of that reef that have never been climbed or traversed. 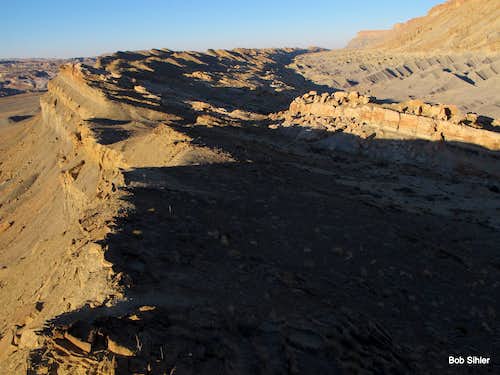 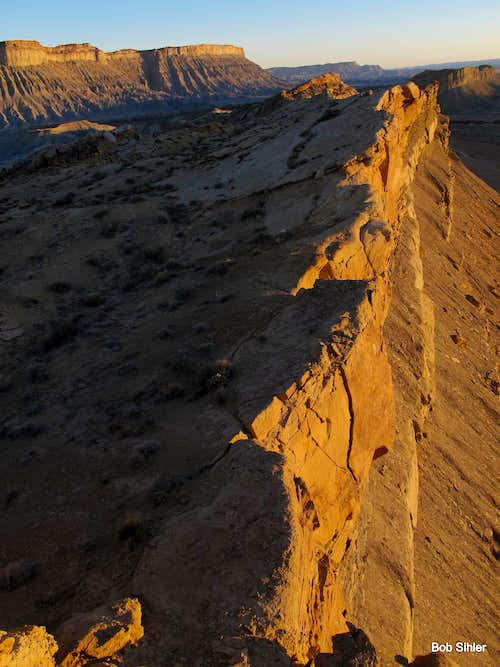 Any time of year, but in summer, go out very early or very late in the day to avoid dangerous heat.

No developed campgrounds close by (there is a place in Caineville calling itself a campground and RV park, and maybe I've just been by at the wrong times in recent years, but it always seems closed).

But you can camp off the road leading to Cathedral Valley for free (no services at all). The ground is hard and rocky, so you're advised to use the car as a tent.

No official red tape at all; just exercise respect and common sense and try to tread as lightly as possible.