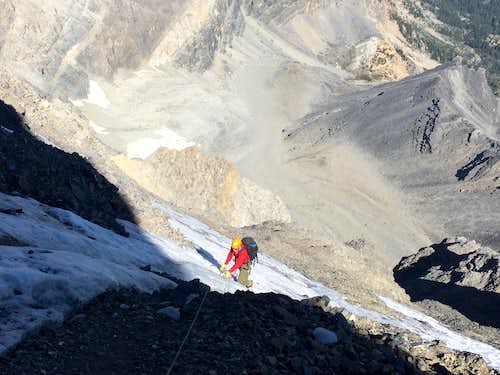 After a noisy Friday night at the Mill Creek trailhead Jeff and I headed up the trail at about 3AM armed with lots of info about the traverse approach to the north face.  It went fairly easily and we were at the large cairn (thanks Kevin!) marking the Mike Howard traverse by 6AM when it was just getting light.  We did not follow the escalator ridge however and stayed in or near the stream bed below as suggested by Forrest and  Quentin in their TR from June.  It was easy in the dark to just keep following the left side of the creek, also we only had about 200 ft of elevation loss out of the initial saddle. 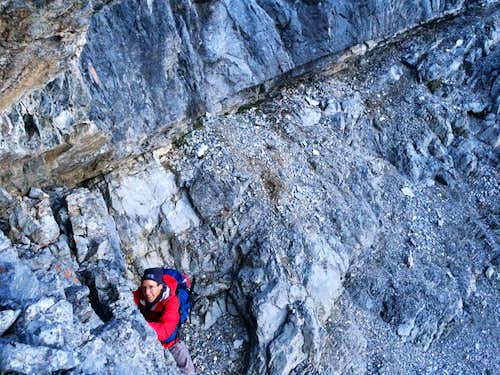 We put our boots on at the traverse and scrambled across (no snow) and dropped down a couloir into the main basin below the face.  Then we slogged up the final scree band to a patch of snow connecting with the face at around 11100 ft.  It had a nice water drip to refill from while putting our crampons and harnesses on.  Heading up from there at around 8:30, the next 1000 feet was awesome neve snow, with an occasional ice patch here or there.  We took Curt’s couloir as the normal route was more melted out and we would have had to cross a fair amount of scree to get to it.  The snow was beautifully firm and we started initially with one tool then pulled out the other as things steepened.   We took our time, resting our calves and lungs frequently, enjoying the views.   No clouds, no wind, no rock fall, no worries. 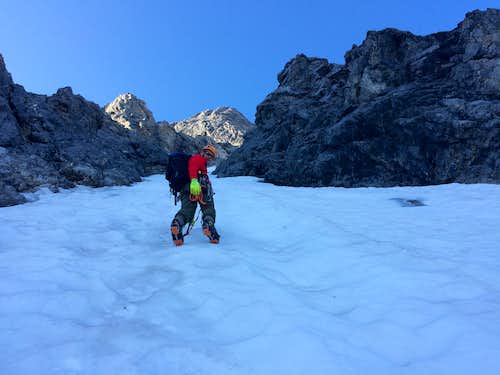 Topping out of the couloir we found the traverse a melted out mix of ice, snow and rock.  I was able to peer into the “direct” couloir which still held good neve but had a middle section (about 1/3rd the way up) that was melted out.  Also the top 40 feet or so was all rock.   Hoping for more ice, we opted for the summit couloir and roped up for the traverse due to the variable terrain. Two pitches got us to the summit couloir which had a narrow ribbon of ice, 2 feet wide in some places, all the way to within 30 feet of the top.  Sweet! 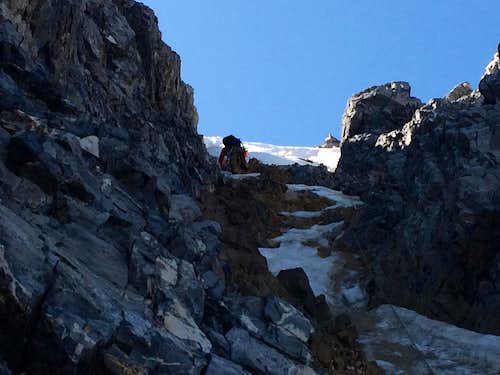 I headed up and was grinning as I stemmed one foot and tool on ice and the other on rock through the initial section.  Then the first barrage of rocks came down.  The face had been completely quiet in spite of no freezing temps, so I was surprised that there was so much activity now.  Then I realized, to my chagrin, that this was the summit couloir, and the rocks were being knocked into the couloir by unsuspecting folks above.  Crap!  I motored up to the end of the rope and found a  semi-protected niche in the left hand wall about half way up the couloir,  As luck would have it, there was an surprisingly good crack there and I banged in a pin, placed two Lowe tricams and belayed Jeff up.  Fortunately I think people heard all our yelling and only one more salvo of stones came down while Jeff was following.

I took the final lead to the top and plopped down beneath about 20 people to belay Jeff up.  The usual funny questions/ remarks ensued:  “Are you rappelling that?” “What does it mean to glissade?  I heard a woman died that way.”  “Why did you bring ropes?”

Jeff couldn’t get the pin out so there is a good start for a belay there for those that want it in the future.  We summited just before 1PM and spent about a half hour in the summit vicinity before starting the plod down.  Great day with a good friend on a phenomenal alpine route.  Having done it in the spring I prefer the challenge and variability of the fall conditions we found.  I would agree that it is reminiscent of a classic Canadian route just without the glacier travel.